by Brian Hollar, @brianhollar
Back to Blog

Many pastors and pundits claim that divorce rates between Christians and non-Christians are the same. But this statistic is misleading at best and grossly understates the actual connection between religion and marriage. For nearly 50 years, people who attend church regularly marry at much higher rates and, for a majority of the population, those who attend church frequently also divorce at lower rates than the rest of the population.

Both marriage and church attendance have been in decline in the United States since 1970. During this time, fertility rates have fallen and rates of cohabitation have increased. Each trend represents large changes in family formation, and the impact on society is still not fully understood. The decline of both religion and marriage have received a lot of individual attention by researchers, but are usually analyzed separately. What if these two trends are connected in some way?

Historically, Christianity has encouraged adherents to marry and generally discourages divorce. It seems strange to think that these beliefs would have zero impact on marital choices made by believers. It makes sense that the impact of these beliefs would be greater among those who are the most active in practicing their faith. Indeed, there is strong evidence connecting regular church attendance with higher relationship quality for Latinos and Blacks and for Americans in general.

When trying to understand how much people value something, economists pay particular attention to the value of what people give up in order to estimate how much they value what they get in exchange. Money is a common metric for value, but time is another metric that is sometimes easier to use. When it comes to Christianity, people are often reluctant to discuss how much money they contribute to their churches but are more forthcoming when asked how much time they spend on religious activities. Economists who study religion often use the frequency of church attendance as a proxy for the strength of an individual's religious beliefs. 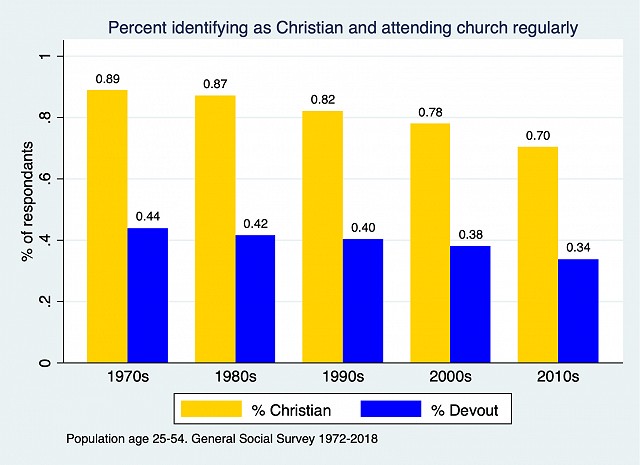 Looking at how people identify themselves religiously across time allows for several interesting observations. First, the percentage of individuals identifying as Christian has declined from 89% in the 1970s to 70% of the population today. Second, the percentage who attend church two to three times per month or more is roughly half of those who identify as Christian across all decades. Third, a majority of the population identifies as Christian, which may explain why the divorce rates of this group may not differ much from the national average. Fourth, the “devout” represent a minority of the population, and their divorce and marriage rates may be significantly different.

To examine these observations, we can look at how marriage and divorce compare between Americans who attend church relative to those who do not. 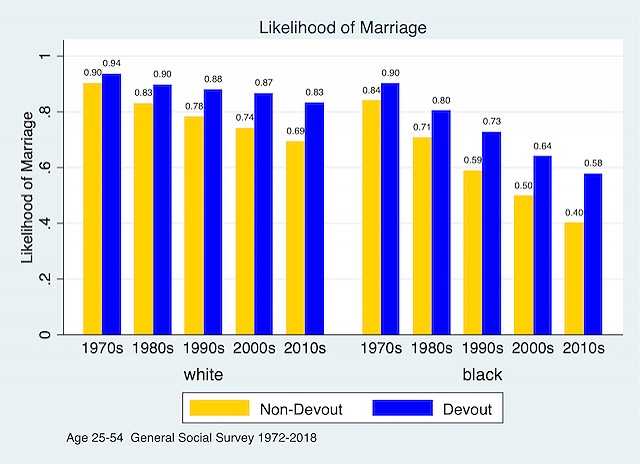 Here, it is clear that marriage rates have been falling for the population as a whole. But those who attend church on a regular basis are significantly more likely to marry than their less devout peers. Breaking this analysis down further by race,2 we see higher rates of marriage among regular church attenders in both white and black populations.

There appear to be social and economic forces occurring over time that are causing decreased marriage rates for all Americans. But for both black and white Americans, marriage is falling significantly faster for people who do not attend church regularly. This is creating a growing gap in marriage rates between the devout and non-devout over time. And the widening gap in marriage may indicate a growing separation of shared culture between the devout and non-devout. 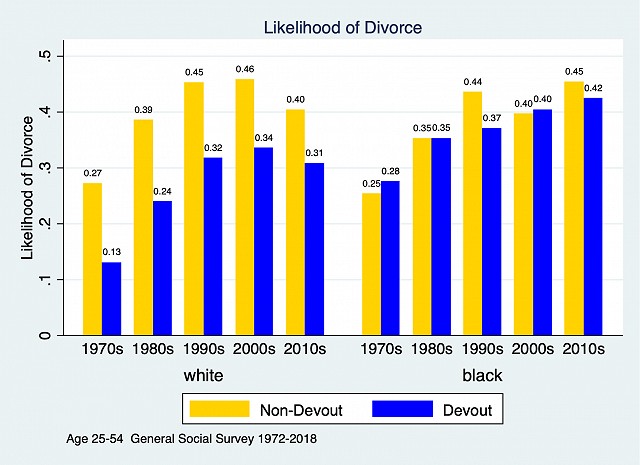 The figure above shows that divorce rates are significantly lower for white Americans who attend church regularly and this difference remains significant across all decades. The relationship between divorce and church attendance is harder to interpret for black Americans. Factors contributing to the much more rapid decline in marriage rates for blacks may also contribute to greater instability within marriage for devout blacks, but why this would be the case is not clear.

These trends bring up an interesting question of whether married people are more likely to frequently attend church (selection effect) or whether frequent attenders are more likely to marry (treatment effect)? While this is not an easy question to answer, this quick look at GSS data shows that the claim that Christianity has no effect on marriage and divorce is grossly overstated.

Scholars who study marriage and its impact on society should pay greater attention to the relationship between religion and marriage. Pastors and believers should be encouraged that Christianity is associated with higher marriage rates and lower divorce rates for regular church attenders. Policymakers should be careful that programs to promote the welfare of families and children do not ignore the positive impact religion may have on marriages.

There is still a lot we do not understand about how religion and marriage influence one another. While people should probably not start going to church simply on the basis of these statistics, this data should also not be ignored by those quick to dismiss the benefits of religious belief. An active faith appears to be connected in some way with more stable marriages. How this connection affects health, happiness, economic outcomes, and fertility rates should all be the subject of further exploration.

Contrary to what is sometimes claimed, Christians who go to church on a regular basis are more likely to marry and less likely to divorce than the general population. If existing trends continue, marriage may continue to decline in prevalence in the United States. But it is also likely that religion will continue to have an insulating effect against marital decline. Commitment to one’s faith appears strongly correlated with commitment to one’s spouse, and this is a relationship that shows no indication of changing anytime soon.

Brian J. Hollar is an Associate Professor of Economics at Marymount University in Arlington, VA. You can find him on twitter: @brianhollar.

1. Age 25-54 represent prime working and marrying years—the period of life after most education has been completed and before retirement.

2. Unfortunately, when the General Social Survey was started in 1972, the only racial categories included were “white”, “black” and “other”. Since “other” represents numerous heterogeneous racial groups, this analysis focuses on “white” and “black” racial groups.