There is no doubt that the events of the past seven months have made many parents reconsider the relative value of private and public education. In March, as most schools shut down in-person education because of the COVID-19 pandemic, private schools typically pivoted more quickly than public schools to provide quality online education to their students. This fall, private schools have proved more capable than many public schools of moving quickly to offer flexible, in-person, five-days-a-week education to their students. The upshot is that more parents are removing their children from public schools for the first time and enrolling them instead in private schools so they can continue to get the best possible education.

The relative success of private versus public schools in responding to the challenges of the pandemic adds another data point to the ongoing debate about whether public or private schools are more successful in delivering basic education to our nation’s children. But delivering a basic education is only one function of a good school. Schools don’t just convey academic knowledge to children; they also play a critical role in fashioning a child’s moral life, and the effects of this formation extend well beyond the classroom walls.

As social institutions, in the words of James Hunter and Ryan Olson of the Institute for Advanced Studies in Culture, schools have “distinctive ideals, beliefs, obligations, prohibitions, and commitments — many implicit and some explicit,” which “form a moral ecology.” Different kinds of schools, with different moral ecologies, set our children up for success or failure in areas of life outside of the classroom. Chief among these is family life.

We know that men and women who forge strong and stable marriages are generally happier, healthier, and more prosperous. Any children they have are also more likely to be in better shape emotionally, economically, and educationally. And communities dominated by married men and women are more prosperous, economically mobile, and safer. It is for these reasons that, in a new report published by the Institute for Family Studies and the American Enterprise Institute, we and our colleagues, Albert Cheng and Wendy Wang, examined how enrollment in public, Catholic, Protestant, and secular private schools is associated with family outcomes later in life. What we discovered was evidence that the moral ecologies of these different school types are powerfully linked to the family lives students will ultimately lead as they grow into adulthood. 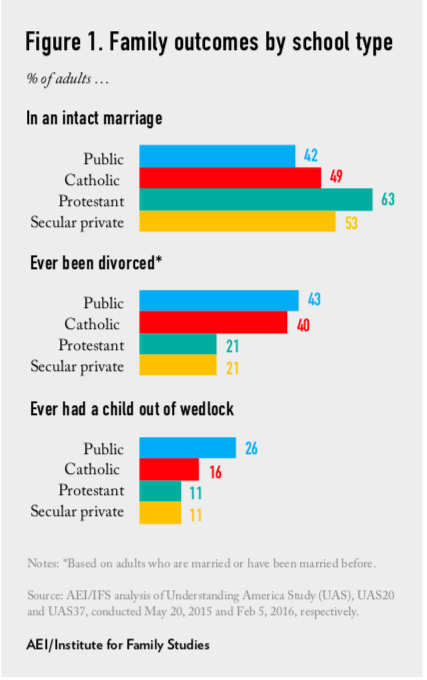 In general, students who attend private schools are more likely to forge strong and stable marriages, and to have their own children in marriage. We were especially struck by the ways in which students who attended Protestant schools had an advantage when it came to forming and sustaining their own families.