Last year, as Congress debated the comprehensive social spending packaged dubbed “Build Back Better” (BBB), some observers thought that the United States was on the verge of a political paradigm shift with the nation’s first federal paid leave program. As the UCLA World Policy Center has pointed out, the U.S. is the only developed nation not to offer a federal guarantee of paid leave for new parents (though the Family and Medical Leave Act—FMLA—does provide up to 12 weeks of unpaid, job-protected leave for medical and caregiving situations, including childbirth and bonding.)

But the political conditions were always shaky, and the Biden administration’s initial proposal of 12 weeks of paid family leave was nearly dropped from the bill altogether. Ultimately, a four-week guarantee passed the House. It was defined more expansively than paid parental leave alone; one estimate found that less than one-third of the benefits of the bill the proposal was based on would have gone to new parents. By the end of 2021, negotiations around the bill fell apart, which means that, at least for now, the status quo will hold.

For paid leave advocates, this may be disappointing, but it should also provide a clarifying moment. If an expansive paid leave package has proven politically infeasible—or, at least, not politically appealing enough to secure passage—a more modest and tailored proposal may find more backers and a more promising pathway forward.

There is no shortage of anecdotal voices of workers who have experienced varying degrees of paid leave, or lack thereof. But to know where the contours of public opinion lie, these individual stories must be read in conjunction with data on the public’s level of willingness to support different paid leave programs. 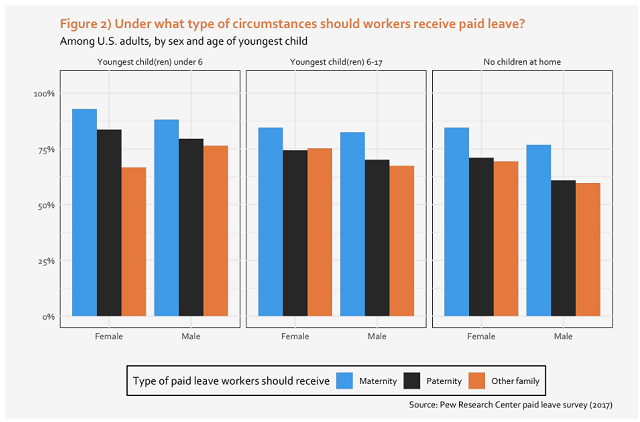 This report seeks to identify parameters for a politically achievable paid leave proposal, using polling and interviews to illustrate what an approach to paid leave that puts parents first might look like. In particular, this report suggests the following elements might have appeal across the political spectrum:

•  Streamlining administrative burdens, making any paid leave intuitive and easy to understand from the worker’s perspective

•  Focusing solely on paid parental leave, leaving political battles over broader definitions of paid leave for another day, and

•  Providing the biggest benefits to new moms, acknowledging the wide-spread recognition that they bear the biggest physical, mental, and emotional burden in recovering after a new birth.

For example, a policy that provides six weeks of modest maternity benefits to mothers who have just given birth, and three weeks of benefits to fathers or adoptive parents, could offer some baseline of stability to families’ incomes around the time of childbirth while keeping the price tag low enough to appeal to voters across the political divide.

This report approaches the question of paid leave through the lens of ascertaining what sort of approach might most appeal to parents and voters. It is informed by interviews with parents who were willing to share individual stories spanning a variety of experiences with both paid and unpaid leave, but also relies on nationally representative polling data to develop insights into what approach might be most appealing to voters.

The result points to an approach that will not be as comprehensive as progressive advocates might prefer and leaves out a variety of family and personal circumstances that some may desire. It also may require more government spending and intervention than traditional economic conservatives may find ideal.

But a program that offers a tightly-defined purpose, and focuses on clear rules for eligibility and administrative legibility, could offer a compelling vision for how the state could meaningfully support families and avoid many of the political pitfalls a more expansive—and expensive—approach to paid leave has fallen into.