One Way to Boost Fertility: Babysit Other People’s Kids

American fertility is in freefall, with the total fertility rate plumbing new depths each year. At the current pace, 2018 or 2019 will have the lowest total fertility rate in American history. Experts like me are left wondering why? And there are lots of possible reasons. But one we frequently hear is that having kids is just too hard or too costly. As I was recently reading the book, The Tech-Wise Family (my wife, quite justifiably, wants me on Twitter less), I was struck by a statistic from The Barna Group, suggesting that 78% of parents believe that parenting today is more complicated than in the past. It seems like others have more opinions about how we parent nowadays: Instagram, the mommy blogs, Pinterest, the proliferation of books a new mom absolutely must read to understand her fertility, a child’s sleep schedule, post-partum depression, or how to make an origami mobile for an infant so that the child will become a compassionate adult, and the list goes on. It’s all a bit overwhelming.

And the data shows that parents are overwhelmed. Throughout the United States, parents spend an average of nearly 5 hours per week per child providing for the direct, physical needs of their children under age 5. In 1965, it was just 3.5 hours. The time that parents spend just caring for the basic physical needs of their own kids has risen by nearly 50% on a per-child basis. 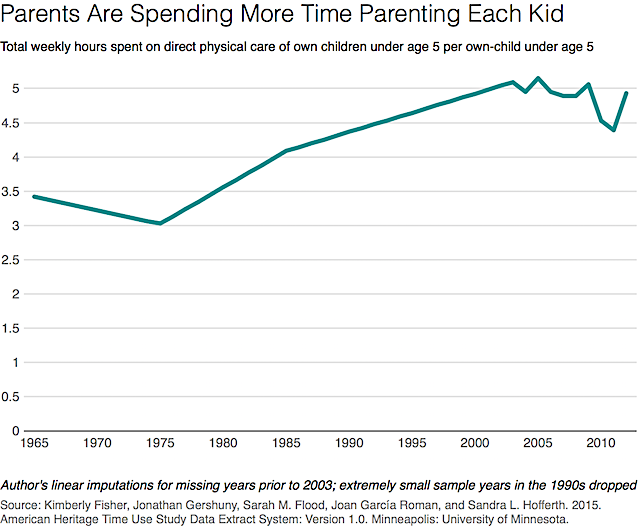 Some sociologists will present this as a good thing; “Isn’t it wonderful,” they might say, “that parents now invest so much in their children?”

Maybe. But the numbers I’m showing only represent core physical care, not reading, talking, or playing. It doesn’t seem obviously good that parents today have to spend twice as much time rocking a kid to sleep, changing diapers, putting a kid’s clothes on, or caring for other needs that, if we’re honest, basically haven’t changed since Mary put Jesus in a manger, or Moses was in a basket on the Nile. Rather, the escalation in time spent on physical care suggests either that modern parents are less efficient parents than in the past—or that, in the past, somebody else was doing the caretaking.

But I want to focus on that second question of non-parent caretaking. In 1850, there were about 2.2 times as many people ages 16 and older with no child under 5 in their household as there were same-age people who did have a young child. By 1900, it had risen slightly to 3.2. By 1950, it had risen again to 3.95. But today, there are nearly 10 times as many responsibly-aged people with no small child as there are with a small child. 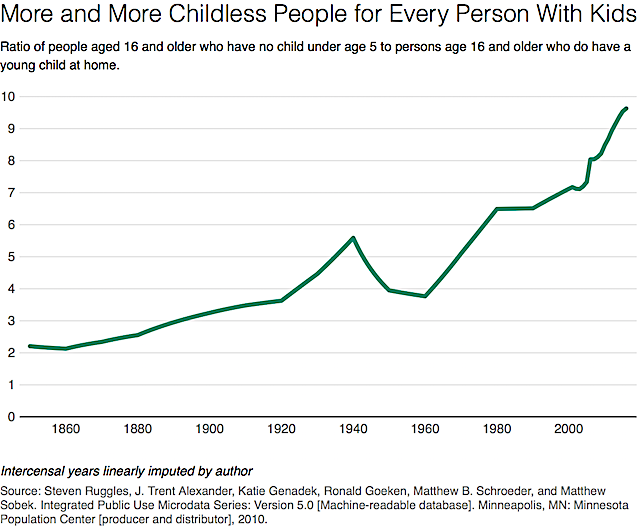 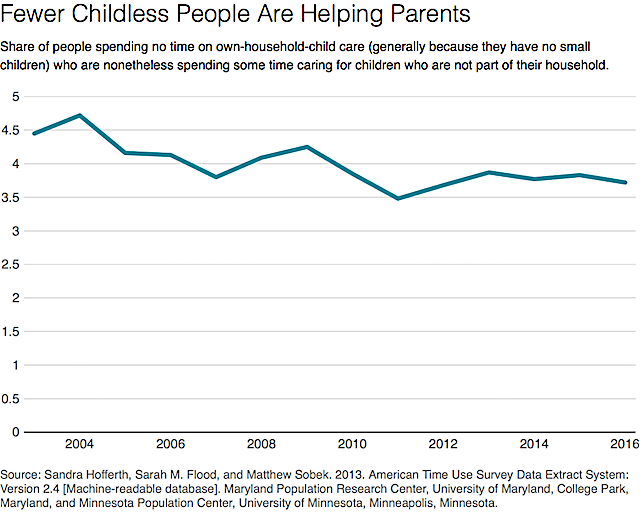 In other words, as the potential supply of childless people who could be babysitters is exploding, the actual frequency with which Americans watch other peoples’ kids is falling steadily.

In traditional societies, child-rearing is a collective project. A village-based society tends to distribute parenting duties between families, with a large number of adults taking a share of the work of providing for a child’s needs. Even in the United States today, many communities that maintain strong family social norms have this kind of “modern village” parenting style, whether it’s immigrant communities in big cities or Mormons out west. Unsurprisingly, these groups tend to have higher fertility, perhaps in part because parents, and especially women, have more volunteer help on hand to assist them.

But for most Americans today, we have “absentee villages.” Many Americans live far from their families. Young and old people are probably more culturally different today than at almost any time in American history. Fewer and fewer people participate in multigenerational intentional communities like churches, and such churches as do exist are increasingly megachurches, where childcare is quasi-professionalized, and the dense networks that enable non-Sunday-morning childcare to occur may never form. Indeed, as childcare becomes more and more atomized, we have seen the time parents spend parenting rapidly increase, fertility decline, and childcare costs explode.

While the economic case for babysitting your neighbor’s kids may be strong, the moral case is even stronger.

It doesn’t have to be this way. Basic math suggests that we can create modern villages, and easily. Let’s imagine that we, as a society, decided that every parent should get one night off per week; that is, they should get an overnight period with no kids, and not have to pay a dime. Would this be hard to achieve?

No, it would be easy! If even one-third of people ages 16 and up with no small children can be considered decently safe babysitters with some spare time for just one night, then the math works out that every such infant-free person would only need to do overnight babysitting about 1.3 times per month. That is to say, even once we exclude two-thirds of potential babysitters due to them being disabled, criminal, excessively busy, or otherwise unreliable, it is just not that hard to come up with a system where society can give parents a huge break.

And yet we expect parents to do it alone. We give them precious little compensation for creating these positive externalities. In traditional agrarian societies, children mostly worked on the farm and lived near their parents, so parents “captured” much of the economic externality by claiming a share of their child’s production as farm earnings and, eventually, elder care as they shared housing. Today’s parents don’t even get that: it is exceedingly rare for children to share income with their parents voluntarily, and shared housing with elderly parents is also becoming less common. So, given that society is continually ratcheting up the cost of parenting, by reducing the degree of voluntary support for parents and pushing them into market-based childcare, while continually ratcheting down the returns on parenting, by shifting to atomized forms of wage-labor, it’s no surprise that parents report that parenting is harder than ever, and that fertility is falling.

But while this economic case for babysitting your neighbor’s kids may be strong, the moral case is even stronger. Everyone alive today was once an infant. Most people alive today will one day once again lose control of their bowels in old age, and perhaps lose control of their words and mind. This is the human life cycle: we go from total dependency on others, through a period of autonomy, and back to total dependency. Some prideful people try to resist this, trying to diminish the extent to which others helped them as a child, and asserting that they’ll take care of themselves in old age. Usually, they’re wrong, but even if they end up correct, that’s a very lonely road to walk down, where your only visitors in old age are people you pay to visit you.

For most of us, we can acknowledge that we came from dependency, and will return to dependency; ashes to ashes, dust to dust. And with this realization comes the desperate urgency to find young children for whom we can care, shut-in elders with whom we can have a meal, and dying people beside whose beds we can sing hymns. How can we, on the one hand, demand that people care for us as an infant and again as an elder, and not care for others now when we are able? What rank selfishness or cowardly fear of death justifies choosing Netflix over changing my neighbor’s diaper?

My wife and I try to keep these things in mind, but truth be told, we’re terrible at it. We often find ourselves patting each other on the back after a month where we maybe watched other peoples’ kids four times—when the truth is, our friends who are parents do this stuff every day. Our friends who are older but still healthy and mobile are visiting shut-ins every day. It is so little to ask that we should watch somebody else’s kids or go sing hymns with a senior citizen twice a month; it takes next to nothing of our time, especially since young kids fall asleep very early, and usually just want to watch Moana on repeat. And yet, how rarely we make these small sacrifices for enormous societal gain! If we did it more, if everybody did it more, we could correct a serious societal moral failing economic externality: our cultural abandonment of parents.