Each big anniversary of the 1996 welfare reform —the Personal Responsibility and Work Opportunity Reconciliation Act—sees an outpouring of retrospectives and new studies trying to figure out how well it worked. It’s long been clear that single mothers flooded into the labor force after the reform, and that their income went up. What’s less clear is whether some particularly disadvantaged families were left behind, and how overall well-being changed for the affected households.

One narrative blames the reform for an increase in “extreme poverty,” evident in survey data in which a rising share of families report virtually no income. I wrote about some of this data myself back in 2016, about a year after the book $2 a Day was released and when the reform turned 20. The book claimed that 4% of families with kids lived on less than that much cash, though the number fell by half or so when other benefits were included. (Welfare reform did cut cash benefits, but other government programs—food stamps, refundable tax credits, and so on–—have only continued to increase.)

Critics, meanwhile, charge that these surveys do not measure income accurately, and that virtually no one lives on $2 a day. Respondents often underreport their receipt of government benefits, for example, and have increasingly been doing so for decades. The surveys also likely undercount “off-the-books” income sources.

This year marks a quarter-century since welfare reform. And a new working NBER paper from Jeehoon Han, Bruce D. Meyer, and James X. Sullivan provides some of the best evidence yet that the law was a success. The study continues Meyer and Sullivan’s use of “consumption” measures to sidestep the debate over income data, and it shows very broad and consistent increases in consumption after the reform.

The problems with income surveys are well-documented. A few years back, for example, Meyer and two coauthors used administrative records to correct estimates of extreme poverty, adding in income and benefits the respondents had received but not reported; they found that $2-a-day poverty was practically nonexistent. The current study skips the income data altogether and focuses on consumption.

Surveys of Americans’ consumption—how much stuff we buy, the features of our homes and cars, etc.—tend to be more accurate and can be checked against other economic data. Even if we remove certain consumption items that aren’t measured well (such as gambling, alcohol, and food away from home), we can still include nearly three-quarters of total consumption. This gives us another view of the “extreme poverty” question: If large numbers of people are somehow subsisting on practically no resources thanks to welfare reform, we should see low and declining consumption for the worst-off after the reform.

But this is not the case. The consumption of single moms—including the bottom 10% of single moms—has risen a lot since the reform in the mid 1990s, according to the new paper’s analysis of the Consumer Expenditure Interview Survey. Even the Great Recession basically just leveled things off for a while, except for single moms in the top half. 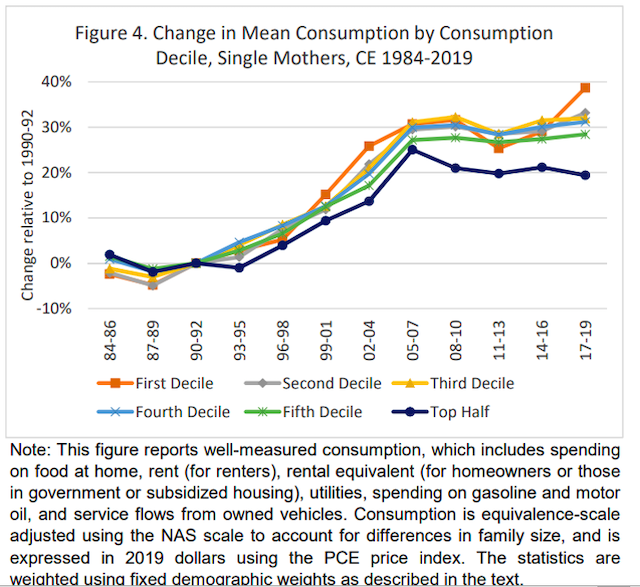 The trends also look good when the population most affected by welfare reform is compared with control groups:

Now, a lot of the paper’s consumption measure is housing, so one might worry that this is just capturing the real-estate bubble. But this concern doesn’t quite pan out, for a few reasons. First, “typical rental prices did not rise as much as home prices in the housing boom, and neither did the rental equivalent that we use to assess the consumption value of home ownership,” as the authors explain. Second, they note that “housing conditions for single mothers improved since the early 1990s, with improvements more pronounced in the bottom half of the consumption distribution.” These homes increasingly had air conditioning, dishwashers, laundry appliances, and a higher number of rooms, suggesting that their actual consumption of housing really did increase. And third, consumption increases were not limited to housing. The bottom tenth of single moms also consumed more vehicles and utilities, for example, though their spending on food at home was about steady.

There are certainly some caveats here. The survey, like most, does not cover the homeless, and while the study accounts for basic demographic variables, it’s possible that the composition of single mothers shifted in more subtle ways over the years. Measuring consumption also requires some judgment calls, such as how to adjust for inflation and how to quantify the consumption value of a house or car—big-ticket items that some people buy at one point in time and consume for long after, while others rent them or pay them off gradually. And sometimes, one can ask whether rising expenditures are a good thing—as they show that people have money—or a bad thing, because they reflect high prices or other problems. (The authors exclude out-of-pocket health expenditures for just that reason: Paying for health care out of pocket is not a sign of higher well-being.)

In general, though, this is a solid blow against the “raging extreme poverty” theory that’s taken root over the past five years or so, especially when seen in light of the problems with alternative data sources. There are many consequences of welfare reform, some good and some bad, but, as this new paper shows, driving lots of families into extreme poverty is probably not one of them.