Not Dead Yet? Marriage in Twenty-First-Century America

Are marriage’s days in America numbered? The answer to this question would seem to be “yes,” judging by the views expressed by some of the nation’s leading family scholars.

Take Isabel Sawhill, the co-director of the Brookings Center on Children and Families. After noting that “marriage is disappearing,” she recently wrote in the New York Times: “Can marriage be restored as the standard way to raise children? As much as we might welcome a revival, I doubt that it will happen. The genie is out of the bottle.”

Down, But Not Out

Her position certainly seems reasonable. Over the last half century, marriage has taken quite a beating. Since the 1960s, the rate of new marriages fell by more than 50 percent, and rates of divorce and single parenthood more than doubled. The end result is that marriage is no longer the anchor for the adult life course, or the family foundation for the bearing and rearing of children, that it once was. 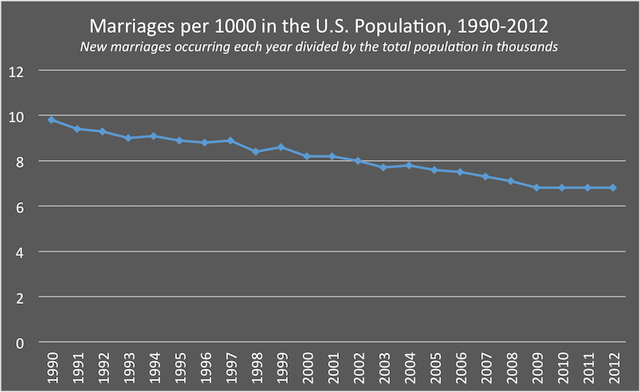 But a close look at recent trends in marriage, nonmarital childbearing, and single parenthood suggests that the nation’s retreat from marriage may be slowing. The figures above and below tell us that:

1)   the marriage rate has not declined in recent years;

2)   the ratio of babies being born outside of wedlock has held steady at 41 percent since the Great Recession; and

3)   the share of children living in single-parent families has hovered around slightly more than one-quarter for more than a decade. 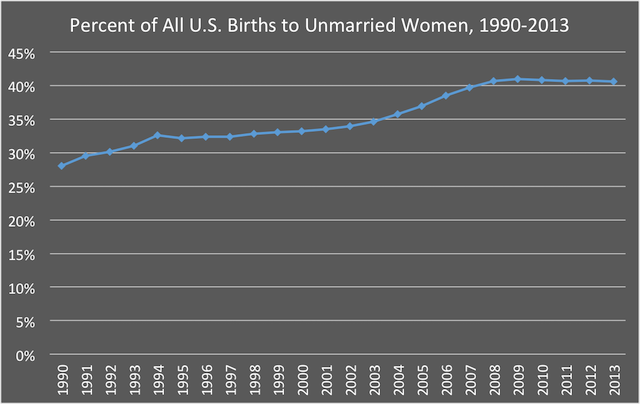 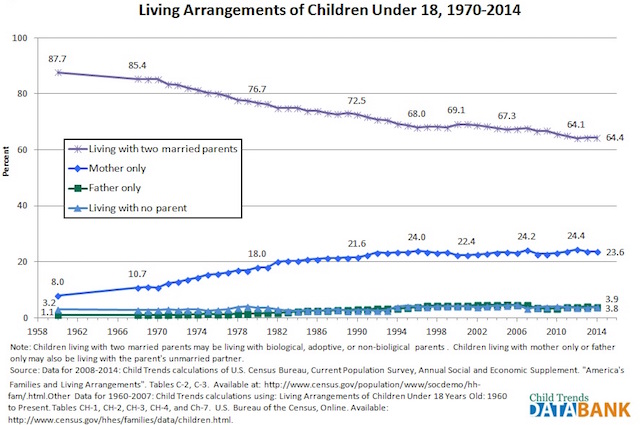 Moreover, a growing number of college-educated millennials are now moving into the stage of life where they are poised to start families by marrying and having children—in that order—in the spirit of “high-investment parenting” (HIP) recently identified by Richard Reeves at Brookings. The movement of college-educated millennials into family life should keep these trends on a stable course. Taken together, the data suggest that the reports of marriage’s death have been exaggerated.

For the Sake of the Children, the Adults, and Lifelong Love

That’s a good thing, too. Now why, besides the fact that I’m the director of the National Marriage Project, would I say that it’s a good thing that reports of marriage’s death may be exaggerated?

First, and foremost, marriage is about providing the best environment for our children. Virtually every week, I run across another study showing this. But what is striking about some of the new research is that it suggests boys benefit in particular from being raised in an intact, married home. For instance, in the last week I read fascinating new studies from Harvard economist Raj Chetty and from Princeton sociologist Sara McLanahan and their colleagues. These new studies indicate that family structure has especially powerful effects on boys. The new study from Chetty and his colleagues found that areas “with high crime rates and a large fraction of single parents generate particularly negative outcomes for boys relative to girls” when it comes to predicting their future income.

In a new study looking at the interaction between family structure, genes, and child outcomes, McLanahan and her colleagues found not only that boys showed “stronger and more consistent responses to father exits” than girls, but also that boys with genes that were “more ‘sensitive’ to their environments responded more negatively to the exit of a father from the household and more positively to the entrance of a biological father into the household,” than boys with a different genetic makeup. In other words, here we have more evidence that having a biological father in the home matters—especially for boys, and even more so for boys who are genetically predisposed to be vulnerable—when it comes to reducing antisocial behavior.

So, if we’re concerned about bridging the opportunity gap in America, and ensuring that all of our kids thrive, especially our most vulnerable boys, we’ve got to be concerned about the strength of marriage and the family for individual families and for entire communities.

But marriage matters for men and women also. The social science suggests that marriage makes men work harder, smarter, and more successfully. For instance, Robert Lerman and I have found that married men work about 400 more hours, and earn about $16,000 more, each year, than their single peers with similar backgrounds. Women also benefit financially from marriage. They do not enjoy a marriage premium for their own personal income, but they do enjoy a major family income premium. They’re also a lot more likely to be in good shape financially when they approach their Golden Years if they have been stably married, compared to their peers who were not stably married.

The Best Vehicle for Lifelong Love

But marriage is about a lot more than money. We know that men and women are typically happier when they are able to get and stay married. We are social animals, we are pair-bonding animals, and marriage provides the best vehicle to live out our aspiration for lifelong love.

We all know marriages that have failed, or have descended into abuse or despair. But, for most, marriage is the best way to realize this aspiration for lifelong love. The main competitor to marriage when it comes to lifelong love, cohabitation, doesn’t compare. Think about it: when you move in together, there is no throng of friends and family gathered in your apartment’s hallway watching you with admiring eyes, there’s no music celebrating your love, and there are no vows underlining your commitment to one another. To put it more sociologically, cohabitation is not institutionalized nearly as much as is marriage. And, not surprisingly, we see that cohabiting relationships—including ones with kids—are much less stable than are married relationships.

This post is adapted from remarks that Bradford Wilcox gave to the Independent Women’s Forum in Washington, DC, on May 13, 2015.