The Social Capital Project, an effort of Congress’s Joint Economic Committee, has a new report entitled “The Demise of the Happy Two-Parent Home.” It provides a good overview of numerous factors that have undermined the family over the past half-century, and it pushes back—interestingly, but not always convincingly—against some major parts of the usual narrative about these topics, including the impact of father absence on children.

Much of the report is basically a series of charts depicting one phenomenon after another that undermines marriage. Most of these don't perfectly track the rise of children living without one or both parents—which shot up from 1970 until 2005, then fell very slowly—but they show how major aspects of modern life have made marriage less attractive.

For one thing, the safety net has become far more generous to single women with children, making it more feasible to support a child without a second adult in the household. The value of benefits to a single mother rose dramatically from the 1940s to the 1970s, though it has been steady, even headed slightly down, since. The authors note that 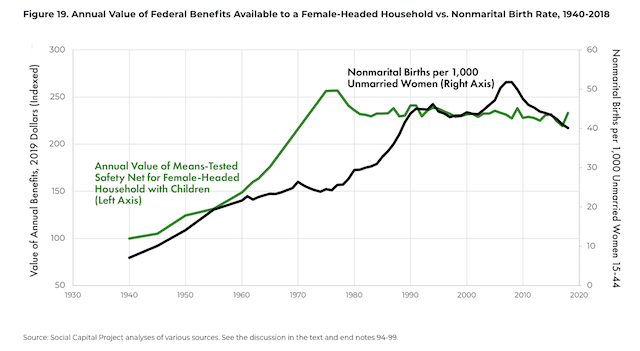 For another, women have made great economic strides, earning far more money. Until the mid-1980s, men made about 30% to 40% more than women per hour; today it’s more like 10%. Women participate in the labor force much more, too, of course. 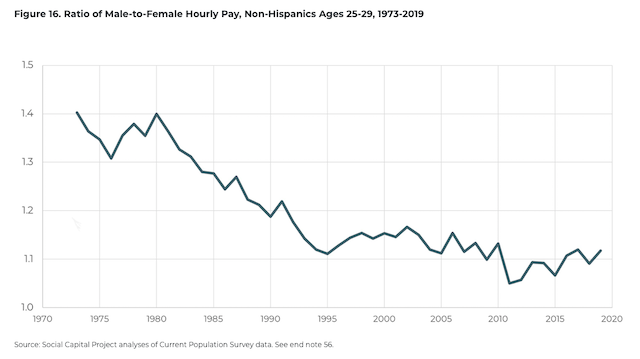 In general, as Americans have become more affluent, older restraints on behavior and morality have weakened. Single parenthood, divorce, and consequence-free sex are all far more feasible than they were decades ago.

These are just basic facts with fairly obvious ramifications. But there are some more contentious aspects of the report as well. For instance, the paper pooh-poohs the notion that men have become less marriageable over time, noting that while male hourly wages declined in the 1980s and early 1990s, they have since recovered and then some, at least when inflation is properly accounted for: 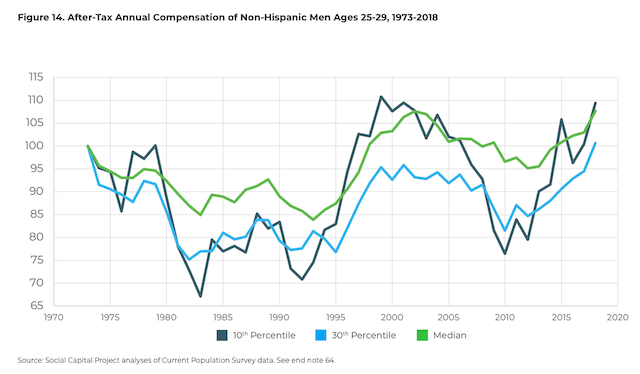 But this is not entirely convincing, in part, for reasons the report itself discusses. Increasing shares of men have been leaving the work force entirely over the past 50 years, meaning they make nothing at all (though this could partly be a response to declining marriage prospects, not just a cause of them). Any given level of male wages probably becomes less impressive as women make more of their own money, meaning that weak growth isn't good enough to preserve yesterday's marriageability. And even if male wages at the median haven't outright declined, they have failed to keep pace with wages further up the income ladder.

The report says it’s “unclear why the potential wives of men in the bottom half of the pay distribution would be more likely to marry someone in 1973 than in 2019 just because upper-middle-class men were doing a lot better by 2019,” but it’s not hard to come up with theories. Maybe women care about how close a man can get them to an upper-middle-class lifestyle; maybe few women see themselves as limited to “men in the bottom half of the pay distribution”; maybe the average Joe looks less attractive as wealthier guys get richer. Or maybe the ratio of women to men in various parts of the dating market has shifted, as women have outpaced men in college and more men have been incarcerated.

Perhaps the report's most surprising departure from the standard narrative, though, is in the tepid way it addresses the question of whether single parenthood and father absence even matter. It concedes that happy marriages are good for kids, but claims that the evidence is weak on the question of what would have happened if single parents had gotten or stayed married to their kids’ other parent.

The standard narrative on this topic points out that children of single parents have far worse outcomes than otherwise similar kids raised by two married parents, and further highlights research using more sophisticated methods designed to show causation, not just correlation. In 2013, Sara McLanahan and two coauthors rounded up a lot of this more rigorous research and concluded that there were still

negative effects of father absence on offspring well-being, although the magnitude of these effects is smaller than what is found using traditional cross-sectional designs. The evidence is strongest and most consistent for outcomes such as high school graduation, children's social-emotional adjustment, and adult mental health.

These kinds of studies have continued since the McLanahan review. A recent one, for instance, leveraged the fact that dads who don’t live with their kids tend to be more involved if the kids resemble them. Such kids have better health outcomes after a year.

From all this, it seems clear that kids would be better off if adults waited until they were in stable marriages before procreating, and if married parents stayed together even through unhappy rough patches that research shows often improve with time for couples who don’t give up.1 Too often that does not happen: Four-tenths of kids are born to parents who aren’t married, and according to the prominent marriage scholar Paul Amato, many divorces stem from boredom as much as irresolvable conflict.

There are some legitimate points in the report's treatment of these claims. For one thing, not all fathers will improve their kids' lives. Studies of families where a dad is sent to prison, for instance, have sometimes found improvements for kids back at home, for instance when it comes to education. Also, a small share of marriages are so unhealthy that divorce can be better, even for the kids. And, of course, no one is encouraging parents to keep abusive spouses around for the kids' sake. The report further notes that even in the McLanahan review, “about half [of the studies] find the estimated effects of experiencing single parenthood are not large enough to reliably say they are real rather than artifacts of imprecise statistical methods.” In general, social science is just hard, and you can never really tell with scientific certainty what would have happened if a certain group of parents had made different choices.

But these points get us only so far. Thirty percent of kids are living without at least one of their parents, usually the dad; are anywhere near that share of fathers so bad they wouldn't improve their kids' lives? And the fact that some studies fail to find an effect on specific traits doesn't mean too much, especially when the other half of the studies point strongly in one direction, accord with common sense, and are especially consistent on certain outcomes (which are likely more affected by father absence than other traits).

There are some limits to what we know from current research, certainly—and social conservatives sometimes have overstated the role of father absence, blaming it—and sometimes it alone—for countless social maladies. We can’t say with precision which dads will be so bad as to make their kids’ lives worse if they are stay around, or which marriages are so “high conflict” and broken that even the kids would be better off if they ended; further research should seek to fill in these gaps. Outside the worst cases, however, the evidence is pretty strong that having a dad around is good for kids in important ways.

To me, the more relevant question is whether public policy can change the situation more than marginally. We're not going to kick women back out of the labor force, re-widen the gender wage gap, or eliminate the safety net. The report's own discussion of policy makes that pretty clear, focusing on "messaging" that elites could deliver, marriage programs with track records that are debatable at best, and financial incentives for marriage—the latter category including safety-net reforms to eliminate marriage penalties and boosting the Child Tax Credit for married couples only.

Some of these ideas are both politically feasible and likely to help a bit, but I don’t see any of them getting us back where we were, or anywhere close to it, in terms of marriage and childrearing. To a large extent, I suspect, we simply have to live with a higher share of parenting taking place outside marriage, whether that’s good for kids or not.

1. Incidentally, note that these rules, especially the first, affect which children are born, when, and to whom, rather than simply saying the actual parents of each child alive now should have married, the counterfactual the report focuses on. In addition to keeping kids with their biological parents, these rules ensure that parents are mature enough to raise children, and that future children are born to the same couple.

5 Questions With Family Studies: Marvin Olasky’s 'Lament for a Father'

Here’s To Uncles Who Help Fill the Father Gap