by Christos Makridis
Back to Blog

Subjective well-being fell to new lows during the onset of COVID-19, but everyone was affected differently. We were all in a storm, but some of us were in tougher situations than others. Of course, well-being is a function of many factors. Our savings, social networks, human capital, occupation, and so on all influenced how the lockdowns and decline in economic activity affected us. But one result is clear: families were able to weather the crisis much better than others. And many families grew closer together over the past two years, too.

My prior research with Clara Piano has pointed out how marriage functioned as a protective factor over the past two years. In the Bible, Ecclesiastes 4:9 reminds us that “two are better than one, because they have a good return for their labor: If either of them falls down, one can help the other up.” For starters, that means that if one person gets laid off or has a hard time, the other can step in to generate income and provide for the family. Furthermore, there are psychological reasons, too: adverse shocks can lead to deteriorations in mental health, so having a cheerleader on the sideline is important.

To better understand these patterns, I draw on individual survey data from Gallup’s COVID Tracking Survey, which was fielded on March 13, 2020, and collected roughly 1,000 responses per day until April 26th, when the sample declined to roughly 500 responses per day. The survey data extend through September 16th, 2021. The sample is a subset of the Gallup Panel, which is designed to be representative of the U.S. national adult population and contains 100,000 members who were originally contacted via random-digit dialing before completing the survey on-line.1

Figure 1 plots the weighted average of current life satisfaction—which is measured using an index between zero and 10—across different demographic brackets, namely those who are married or unmarried crossed with those with or without children. Those who are married have substantially higher levels of life satisfaction—over a 0.5 gap, on average, which is noteworthy given that the average across these demographic brackets spans between 6 and 7.5. 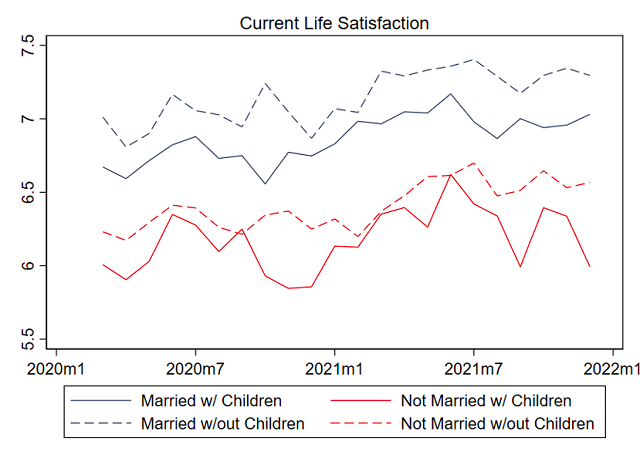 Next, Figure 2 presents another version of well-being, namely the proportion of people who are thriving at a given point in time. Thriving is computed based on having a score of at least 7/10 in current life satisfaction and at least 8/10 in expected life satisfaction over the next 5 years. Here, those who are married with children again have higher rates of flourishing, although the gap between those who are married with and without children is not as large. However, like before, the rates of thriving among those who are not married are much lower—nearly half at 40 percent. 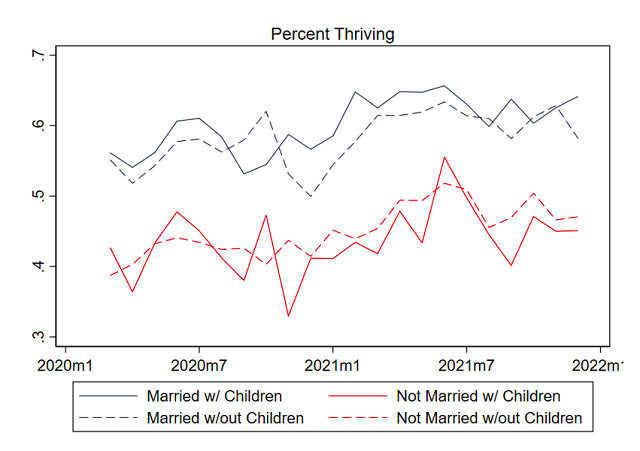 By the end of 2021, we see that over 60% of married respondents with children are thriving. The proportion is similar for those who are married without children, but slightly lower. Unlike in Figure 1 where the married with children have lower current life satisfaction, the married with children have a higher incidence of thriving, which takes into account their future outlook. In contrast, those who are not married—regardless of whether they have children—have substantially lower rates of thriving, between 40% at the onset of COVID-19 to only over 45% by the end of 2021.

Finally, Figure 3 shows the rates of loneliness. The unmarried are substantially more likely to feel lonely, ranging between 30-40 percent. In contrast, married Americans have much lower rates of loneliness, around 20 percent. Having children is not an important moderating variable here. 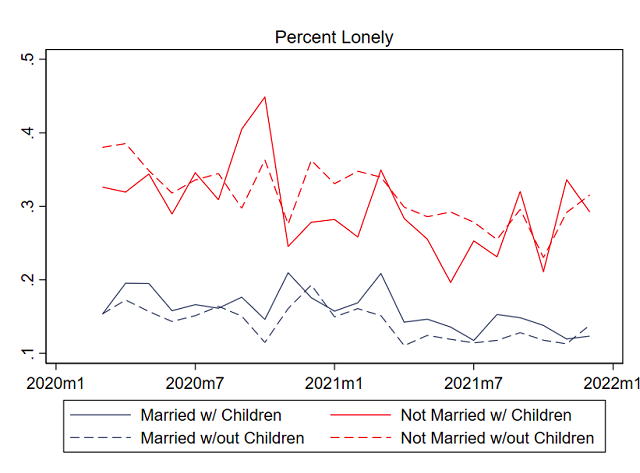 These patterns reaffirm what we already know in social science about the protective effects of marriage for mental health, but they also highlight a complementarity between marriage and children that holds even during the most recent two-year pandemic. Especially during the storms of life, we need a sure foundation to stand on. While marriage is no substitute for sorting out fundamental questions about the meaning and purpose of life, it does provide a glue that brings people together under common objectives and ultimately makes people happier, on average.

Christos A. Makridis is a professor, policy adviser, and entrepreneur. He holds doctorates in economics and management science & engineering from Stanford University.

1. Gallup designed each daily survey to be nationally representative while simultaneously taking care not to create survey fatigue by asking the same respondent to answer multiple COVID-related surveys within a short time span. I use the Gallup sample weights, which are based on region, race, Hispanic ethnicity, age, gender, and education, to target national population.