The two-parent family is still the most common family form for children in the United States—with the majority of children currently living with married parents. This good news comes from the U.S. Census Bureau’s latest America's Families and Living Arrangements report. The data is based on the 2016 Current Population Survey Annual Social and Economic Supplement.

In 2016, 69 percent of the nation’s 73.7 million children under 18 live in families headed by two parents (biological, step, or adoptive). That’s significantly less than the 88 percent of children who lived with two parents in 1960, but still a substantial majority. Meanwhile, the percentage of children living with their single mother has nearly tripled since 1960, from eight percent to 23 percent. According to Child Trends, since 1996, the percentage of children in single-mother families “fluctuated between 22 and 24 percent, and was at 23 percent in 2015,” the same as in 2016.

Four percent of children live with their single fathers in 2016, up from one percent in 1960, while the percentage of children living with neither parent (such as with a grandparent or other relative) has remained about the same. The Census figure below shows the historical trends in children’s living arrangements. 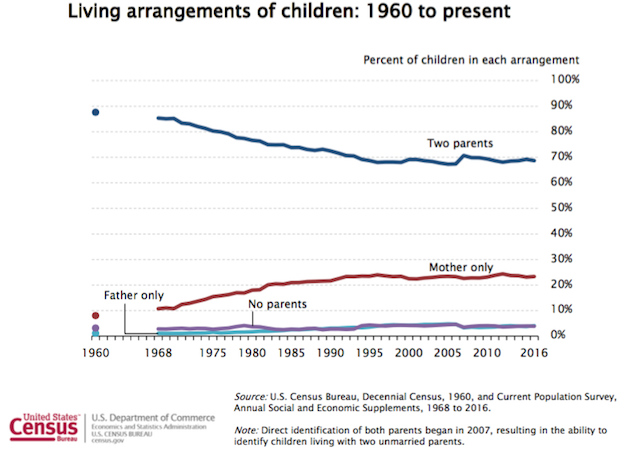 Importantly, married parenthood remains the reality for the overwhelming majority of children living with two parents. “Despite the rise of childbearing outside of marriage, the majority of children in the United States still live with two married parents,” Jonathan Vespa, a demographer in the Fertility and Family Statistics Branch at the Census Bureau, said in a press release. In fact, of the 50.7 million children in two-parent families in 2016, 47.7 million reside with married parents. Furthermore, "married couples account for 68 percent of all families with children under age 18."

By comparison, 3.0 million children live with two unmarried parents (up from 1.2 million in 1996). As the chart below shows, over eight million opposite-sex couples are cohabiting in 2016, and about 38 percent of cohabiting couples live with a child under 18. 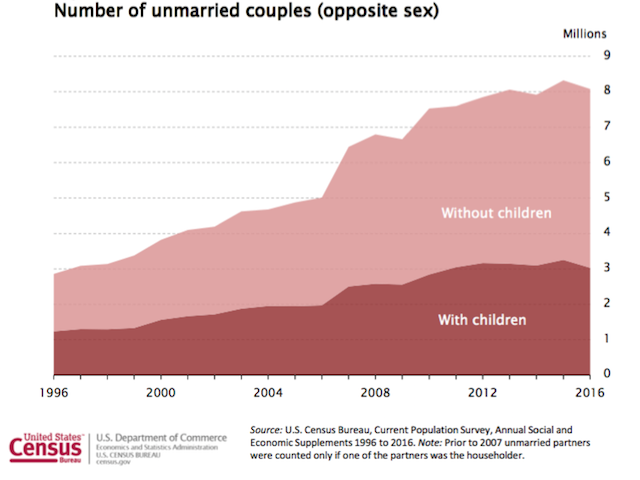 The Census report also includes more detailed information about the type of mother-only or father-only families with children. Interestingly, the majority of children in mother-only families live with their never-married mothers, a living arrangement for children that has increased dramatically since the 1960s (note that the figure below only shows through 2014). 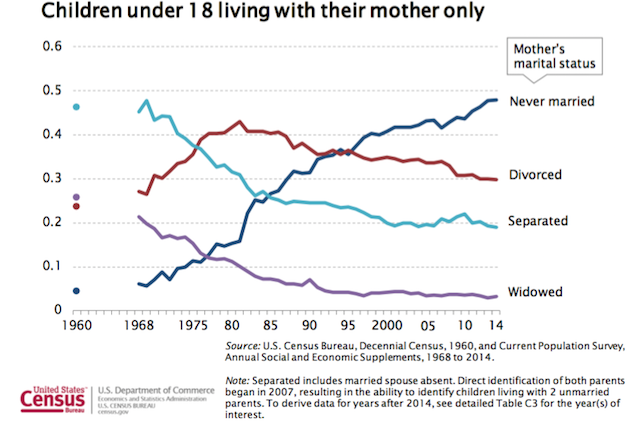 Notably, children living in single-parent families are not necessarily living with mom or dad alone, but may also reside with their parent’s unmarried partner. In fact, by age 12, 40 percent of children will spend some time in a cohabiting household, most often with their biological mother and her live-in boyfriend. As Laurie DeRose has written, the fact that single mothers are increasingly entering cohabiting unions is likely one reason “children of single parents have less stable family lives.”

There are also considerable variations in a child’s family structure based on factors such as parental education and race and ethnicity. For example, Nicholas Zill has explained that children with college-educated parents are significantly more likely to grow up in married-parent families than the children of less educated parents. "The higher the parent's educational attainment, the more likely it is their children will be growing up in two-parent families," he wrote.

Likewise, when it comes to a child’s race and ethnicity, the percentage of children in two-parent families varies. As the Census figure below indicates, just over 50 percent of black children currently live in mother-only families, compared to less than 30 percent of Hispanic children, and less than 20 percent of White children. 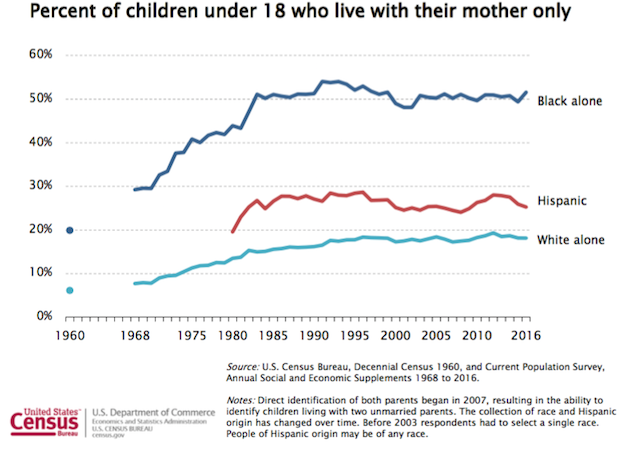 So, while it's certainly positive news that over two-thirds of U.S. children today are currently living in two-parent families, we should not lose sight of the fact that roughly 30 percent are residing in other, less stable family forms that tend to offer fewer social and economic benefits than married-parent families. And we should remember that some children, depending on their race or their parent's education, are more likely to enjoy the benefits of having married parents than others.

Nevertheless, the Census report paints a statistical portrait of the American family where marriage is still connected to parenthood for most children. As we head into the Thanksgiving holiday weekend, that news is definitely something for which we can all give thanks, even as we strive to make it a reality for all children.