More Than 60% of U.S. Kids Live with Two Biological Parents

Each year the Census Bureau captures a snapshot of the living arrangements of U.S. children through its Current Population Survey. The 2014 results were released by the Bureau last week, and the portrait they present of the family lives of 73.7 million American kids is certainly a variegated one.

Yet despite all the talk about the growing irrelevance of marriage, 43 million children, a 58-percent majority, were living with both their birth mother and biological father in a traditional married-couple family. (See Figure 1.) Only 2.7 million—4 percent—were living with two birth parents who had not bothered to get married, at least not as yet. (These numbers are different from those recently released by the Pew Research Center based on another Census survey because Pew incorporated parents’ marital histories, not just parents’ current marital status and relationship to their kids.) 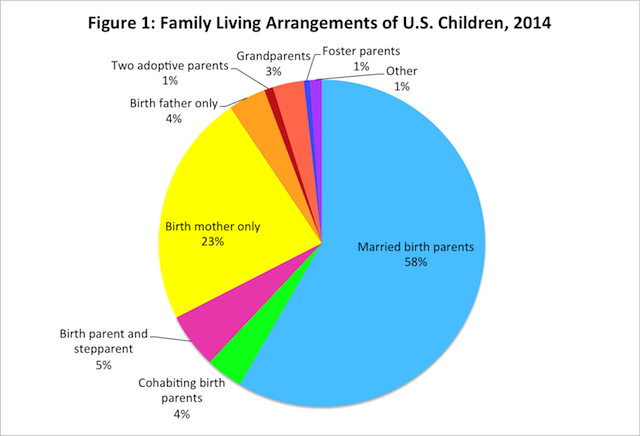 Of course, the proportion of children who live with married birth parents, 58 percent, is considerably lower than it was in the early 1980s (two-thirds), or the even higher proportions who did so prior to rise of unmarried childbearing or the late 1960s divorce revolution.

Twenty million of today’s children—more than a quarter—live in single-parent families, and six times as many of them reside with their birth mothers (23 percent) as with their birth fathers (4 percent). Four million children—about 5 percent—reside with one biological parent and a stepparent, following a divorce or nonmarital birth. Three times as many live with a birth mother and stepfather (3 percent) as with a biological father and stepmother (1 percent). In addition, some 650,000 are growing up with two adoptive parents.

Perhaps the group at greatest risk is composed of the nearly 3 million children who live with neither mother nor father, but with grandparents or other relatives (3 percent) or in non-relative foster care (1 percent).

The family portrait becomes even more varied when the nation’s children are divided into groups based on parent education levels. Even though they may support the notion that single parents can raise children as well as married couples, when it comes to bringing up their own children, American women with college degrees choose to do so within the bonds of matrimony: 86 percent of children with college-educated parents live in married-couple families. By contrast, less than half (47 percent) of children whose parents have not completed high school live in married-couple families. Almost as many (45 percent) live in single-parent families, most with their mothers only. The higher the parents’ educational attainment, the more likely is it that their children will be growing up in two-parent families. (See Figure 2.) 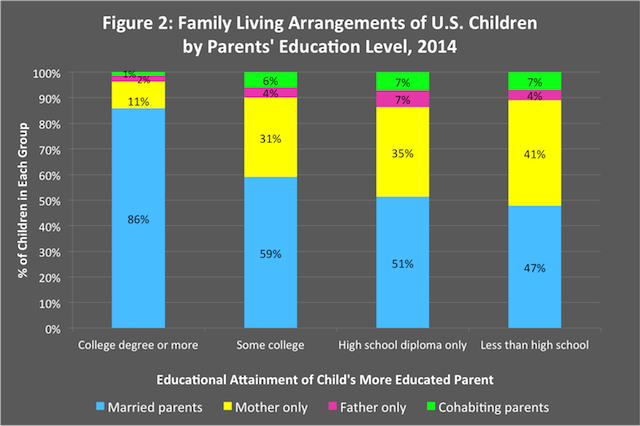 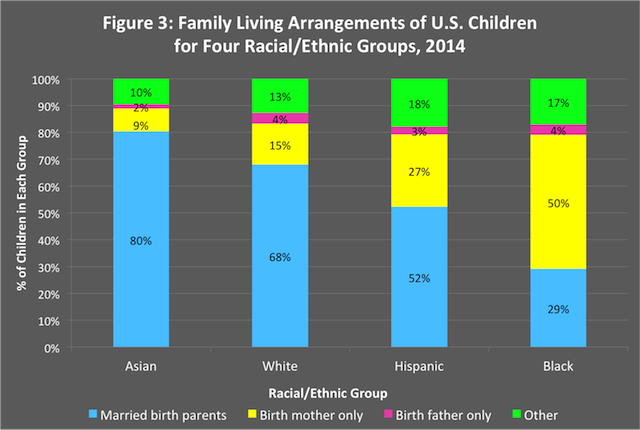 The Census picture of children’s living arrangements is only a snapshot at a single point in time. It does not portray family relationships between children and parents that cross household boundaries. Nor does it show us changes in arrangements and relationships that occur as children grow and develop: for instance, if current trends hold steady, by the time they reach 17 years old, less than half of today’s youth will have spent their entire childhood in a two-parent family. But the Census findings do give an indication of the challenges we face in trying to ensure that all children experience a stable and supportive family life.

Pandemic Lessons in Uncertainty and Resilience