In recent years, academics have posited an incredibly seductive theory: There's a “U-shaped curve” depicting the relationship between gender equality and fertility. As societies become more equal, fertility falls at first—presumably because women are no longer boxed into domestic roles. But eventually, the relationship turns around, and advances in gender equality actually boost fertility. This is presumably because women are willing to have more kids in a society that helps them out. In other words, at this point in the developed world's history, feminism is supposed to be the path to higher fertility.

A new working paper from the sociologist Martin Kolk, published in the Stockholm Research Reports in Demography series, though, weakens this narrative considerably. The U-curve does appear in a simple comparison across countries. But a more complex analysis—looking at changes within countries over time—does not support the theory.

The working paper relies on fertility and gender-equality data from 35 developed countries, with the period 1960–2015 available for most (and some data available as far back as 1900). Gender equality is measured through the Women’s Political Empowerment Index (WPEI), “a multifaceted measure on women’s civil liberties, civil society participation, and political participation across the world.” Kolk reports that this index correlates well with other measures of gender equality.

Here's what all those data points look like when you just dump them on a chart. The top panel shows a negative correlation; this is unsurprising because fertility has been declining over time while gender equality has risen, and the chart includes data more than half a century old. The bottom panel is limited to data from the current century, making it show the cross-sectional relationship more than the time trend—and the much-vaunted U-curve is visible. (Note that the X axis is very different on the two charts because there are no longer developed countries with WPEIs below 0.7, much less below 0.3.) 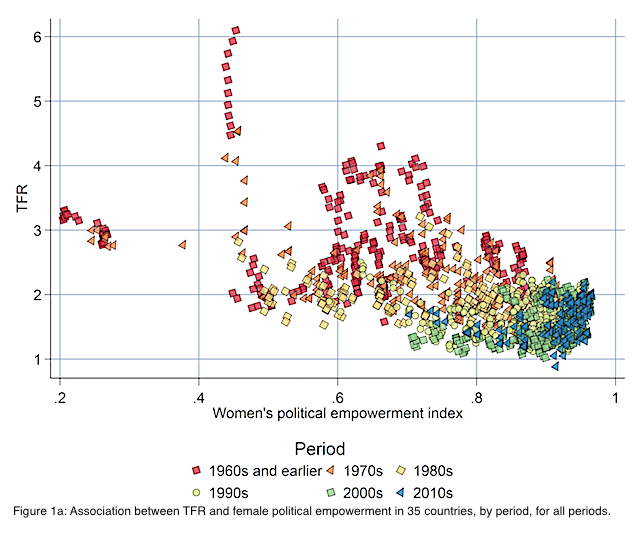 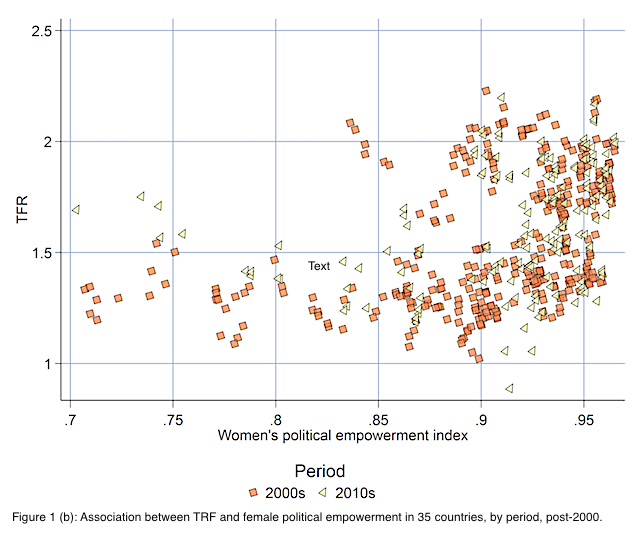 Source: Kolk, M., "Weak support for a U-shaped pattern between societal gender equality and fertility when comparing societies across time," Stockholm Research Reports in Demography, no: 2018-17.

Kolk then takes a look at the trend lines within each country, though, and the picture grows more complicated. Pretty much every country has seen fertility declines over the long term, and, at best, modest increases more recently, no matter how equal it’s become.

Perhaps, though, countries with greater advancements in gender equality have generally seen subtly better trends in fertility, and it's not obvious from looking at so much data all at once. To test this possibility, Kolk ran a regression that controls for the average fertility level of each country, as well as international fertility trends—in other words, checking to see whether fertility grew more than expected (or fell less than expected) when countries reached the upper echelons of gender equality. The answer is essentially no.

When all the data are included, the analysis indicates a pretty simple relationship in which higher gender equality corresponds to lower fertility — albeit with a (statistically insignificant) rebound when countries hit the very highest category of the WPEI. Even this fades out when the data are limited to the years since 1990.

Here’s a chart Kolk provides with his regression results. Models 5 and 6 are the full regressions; the others leave out variables to demonstrate what the relationship looks like with less rigorous controls. (Model 1 is a regression version of the first chart above, for example, while Model 3 is somewhat similar to the second chart.) 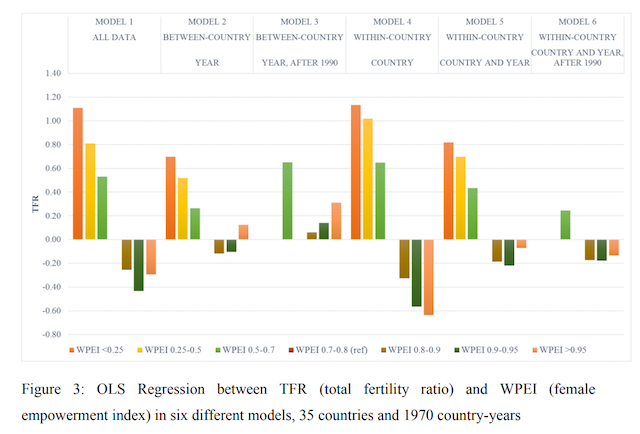 Source: Kolk, M., "Weak support for a U-shaped pattern between societal gender equality and fertility when comparing societies across time," Stockholm Research Reports in Demography, no: 2018-17.

Why is there a U-shape in the cross-section but not in a more sophisticated analysis?

“The explanation for this pattern,” Kolk writes, “is that countries with high gender equality, relative to other contemporaneous countries (mostly in Northwestern Europe), have also had stable high fertility.”

[T]he high fertility (relative other rich countries) in these societies goes back to the 1960s and earlier, despite the fact that surveys show massive value change over this time, and that many policy and behavioral changes such as public daycare and male-parental leave were rare before the 1980s. Even though [the U-curve theory] is modeled on experiences in the Nordic countries, these countries have not had an experience that fits the causal model suggested in fertility-equality reversal theories.

There are, as always, some important limitations to the study. For one thing, while “panel data” regressions like this are powerful—they're much more rigorous than a simple comparison across countries, or a case study of a single country over time—they don’t account for changes within countries that may play out differently in different places and affect the results, such as economic growth, immigration, and the availability of contraception. Adding control variables for factors like these would strengthen the analysis, though it may be difficult to find comparable data on all 35 countries for every year stretching back decades. It’s also possible the results could change if a different measure of gender equality were used as the outcome variable, though Kolk suggests this is unlikely.

Further, Kolk notes that “the absence of a relationship between fertility over time in a country and the overall progress towards gender equality does not rule out a relationship where at the couple-level equality and division of labor/housework is positively associated with fertility.” So, don’t take this as an excuse not to do the dishes, guys.

More broadly, though, despite the obvious appeal of the idea that a more equal society could boost fertility, it appears the U-curve may be an illusion.

Robert VerBruggen is a deputy managing editor of National Review.