The pandemic disrupted American life in many ways, but one trend remained the same: rising sexlessness. A growing share of younger Americans are living without sex. The new 2021 General Social Survey can be used to track these trends over time. As Figure 1 below shows, since 2010, there has been a sharp rise in the share of males and females ages 18 to 35 who report not having sex in the prior year. This trend, which has been described in detail in prior IFS reports, continued in 2021. 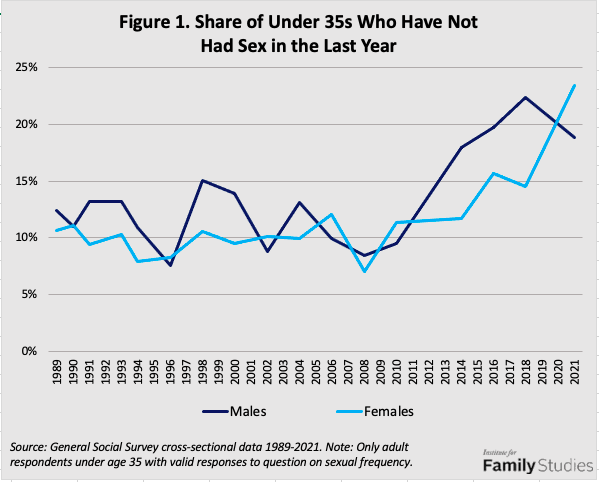 The trends certainly have some statistical noise, and the trend began earlier for males than females, but the overall change is evident for both cases. The share of under 35-year-olds going without sex more than doubled from 2008 to 2021, from around 8% to around 21%

Some of this rise in sexlessness is driven by the broad social trend of increasingly delayed marriage. Married people are more likely to be sexually active than unmarried people: in 2021, only about 5% of ever-married people under 35 reported no sex in the past year, versus about 29% of the never-married. As a result, declining marriage tends to reduce sexual activity as married people make up a shrinking share of the population of people under 35. And indeed, in the General Social Survey data, the never-married share of under-35s rose from just over 50% in the early 1990s, to 60-75% over the last decade.

But there’s also an upward trend in sexlessness among never-married young people, albeit a slightly less pronounced one, as shown in Figure 2. While delayed marriage accounts for much of the trend of rising sexlessness, it isn’t the whole story. 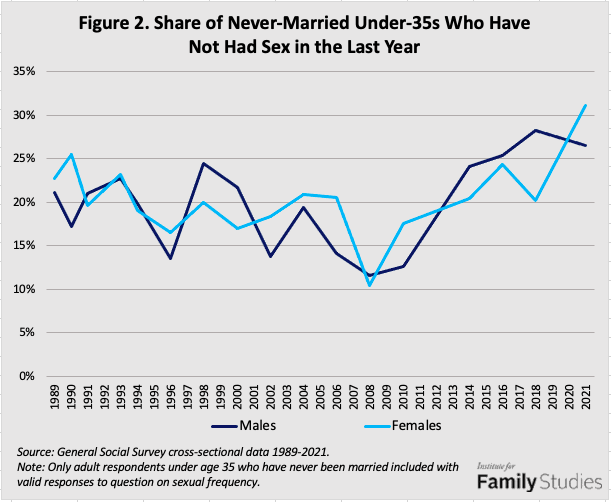 Unfortunately, limiting analysis to “never married people under age 35” creates very small sample sizes in the General Social Survey, and so to generate meaningful results, I combine male and female respondents into a single category. Overall trends for the two groups are similar, and most sexual activity is between males and females, so this conflation is reasonable. 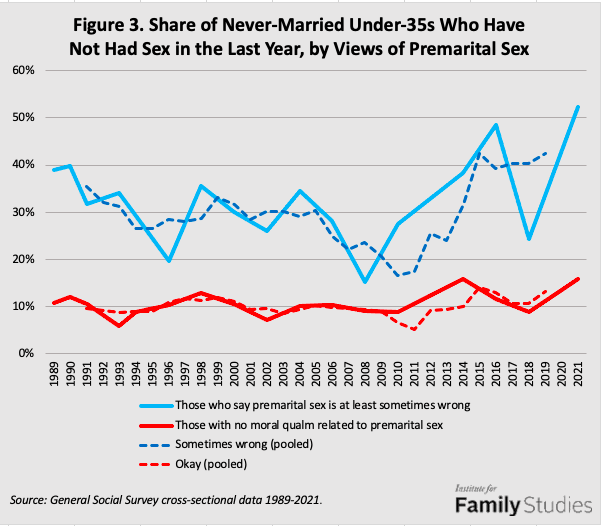 Note: Only adult respondents under age 35 who have never been married, with valid responses
to question on sexual frequency. Pooling of year +/- 2 years to account for variable time between
waves. Premarital sex views collapsed into two categories, with those who view premarital sex as
"almost always wrong" & "wrong on some occasions" grouped & compared to those who say "not wrong."

As the figure illustrates, young adults who believe premarital sex is wrong have consistently been about two to three times as likely to be sexually abstinent for several decades (in the 2021 GSS, rates of sexual abstinence are 52% vs. 16%).

But trends over time are somewhat imprecise due to small sample sizes and statistical noise. To account for that, I also showed “pooled” estimates, which lump together all valid GSS respondents in a given year, plus respondents from one or two years before and after that year. This expands the sample size to make it a bit easier to spot durable trends. Whether pooled or not, it seems like most of the increase in sexlessness among never married under-35s has been among those who say premarital sex is at least sometimes wrong. Though it is true they are a minority of never-married individuals in this age group, their distinctive behaviors are driving the trend. In other words, much of the rise in sexlessness has been driven by people who have moral concerns about premarital sex. It might be better to call it abstinence than sexlessness, since it’s consistent with expressed values. 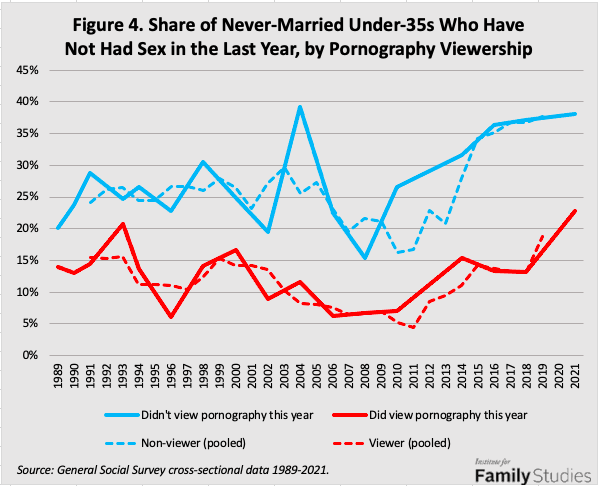 One final way of breaking out the data is particularly striking and may help tie the disparate influences of sexual attitudes and behaviors together: religion. Religious service attendance is correlated with sexual behaviors and attitudes, so it may encapsulate many of the trends described above related to views of premarital sex or pornography usage. Moreover, religious worldviews and attitudes may be a key motivation for abstaining from use of pornography, holding the view that premarital sex is wrong, and abstaining from sex until marriage.

So, does religious behavior correlate with abstaining from sex? The answer is yes, as shown in Figure 5. 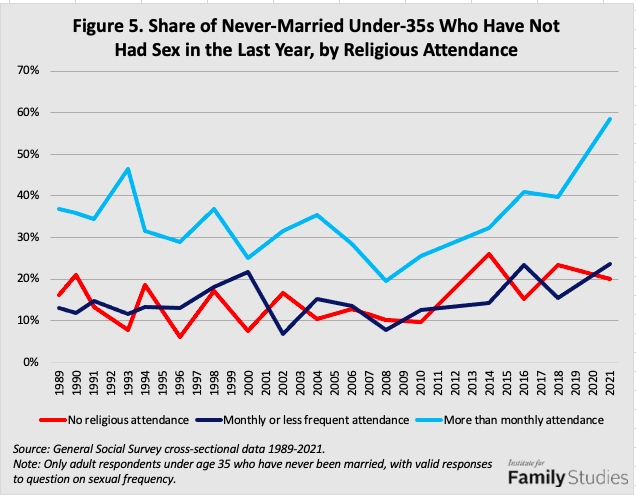 In reality, both stories are probably true. Doubtless, changes in American culture writ large have made religious norms harder to square with day-to-day life for young people spending more and more years without a spouse, and some young adults have decided that the cost of compliance with religious sexual norms isn’t worth paying, as declines in church attendance may indicate. Among adults under 35 who have never been married, the share who are frequent religious attenders fell from over 30% in the early 1990s to under 20% today. But while significant, these changes in religious attendance have been far too gradual to explain the whole trend observed in sexlessness. In particular, there has been essentially zero change in religiosity among unmarried young adults in the GSS sample since 2008. So while compositional changes may matter, the behavior of religious people has changed, too. This would seem to indicate that the current generation of religious young adults is more scrupulous about avoiding premarital sex than the last generation or two.

Increasingly delayed marriage has a large and well-understood effect on sexual frequency among American adults. But the rise in sexlessness among unmarried adults is not as well understood. If the data from the General Social Survey is to be believed, a key part of this story of changing sexual behavior in America is a change among religious people, or others, who believe premarital sex is wrong. Increasingly, religious young adults are “practicing what they preach,” adopting a distinctive set of sexual behaviors. As a result, the growing diversity and polarization that typifies so much of American life is reaching even further, even into bedrooms.