A few years ago, The Atlantic ran a series of letters from women in America describing how their poor mental health made them unlikely to have children. As one woman who wrote in put it,

I am fairly certain, just based on how much I worry about our dogs, that having children would exacerbate my anxiety in ways I would probably not be able to control, and in a way that is likely to burden my children—just the way my mom burdened me.

That series didn’t get a lot of attention in debates about fertility changes in America back then, but maybe it should have. Families in America are among the richest in the world, with more resources to finance consumption of goods, services, and life experiences than almost anywhere else. Yet American women still have about 0.5 to 0.8 fewer children, on average, than they say they would like to have. Why is this?

One reason that does not get enough attention is that millions of Americans wake up every day feeling mentally and emotionally paralyzed, unable to take actions they believe would improve their lives, because they struggle with anxiety, depression, or other mental illnesses. But does a person’s mental health status meaningfully predict fertility? In this post, I will answer this question by showing that unhappiness, anxiety, depression, and uncertainty have significant effects on family formation, leading women to have fewer children than they believe would make them happiest.

To test how mental health and fertility are related, I fielded a survey of about 6,000 women, asking respondents about their fertility preferences and intentions, as well as some basic questions about their well-being modeled off questions from the General Social Survey (GSS) and from some basic clinical screening tools for anxiety and depression.1

Figure 1 shows what share of women at each level of the “happiest outcome gap” intend to have more children, by how happy they said they were at that time. 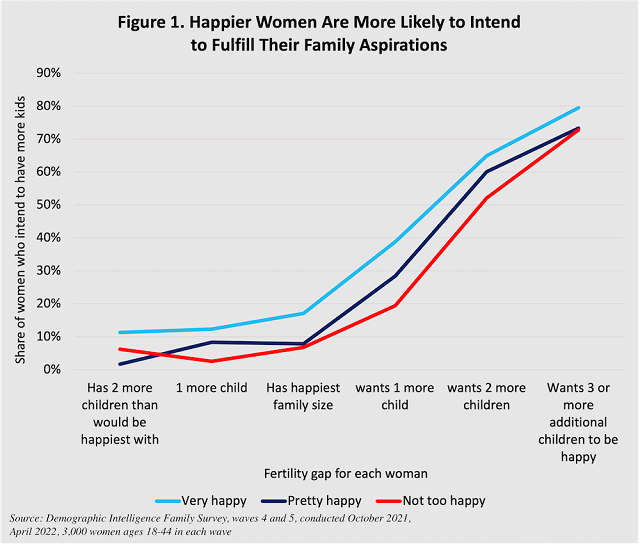 Happier women are more likely to say they intend to have another child across every part of the fertility gap spectrum. Among women who have 2 or more children beyond how many they said would make them happiest (i.e., they already have “excess” children), 10% of “very happy” women said they intended to have even more children, versus a statistically negligible 5% of other women. And among women who said their happiest family size required having 1, 2, or 3 or more children than they currently had, “very happy” women were persistently about 10 percentage points more likely to intend more children. Thus, being happier with their life in general made women more likely to pursue their family goals. This correlation held even with numerous control variables, and it seems unlikely that merely intending more children would cause women to become happier. Thus, it’s reasonable to suppose this linkage between happiness and intentions to complete desired family size reflects a real dynamic in women’s lives. 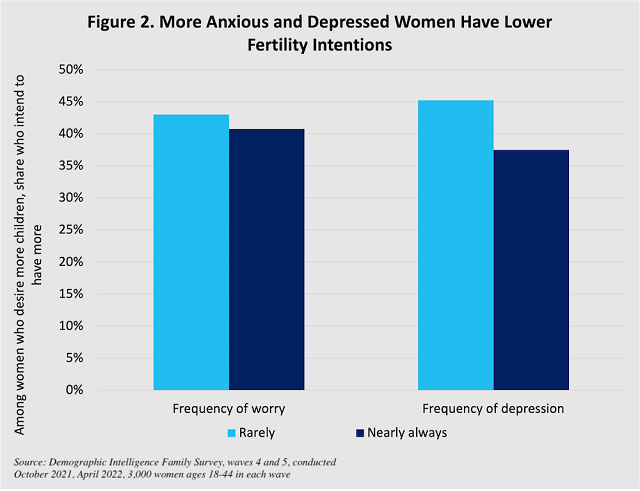 Anxiety, stress, and unhappiness, then, are meaningful predictors of women not intending to achieve their happiest life. Mental illness can be a barrier between people living their happiest lives. Fertility is just one of innumerable examples of this.

Finally, I also asked a subset of respondents about their views of the future: first, I asked if they had a “clear idea” of what their futures held versus “really don’t know,” and second if they thought their lives would get better in the future, stay the same, or get worse. These questions don’t measure mental health, but they may measure some outlooks and dispositions that could be related to mental well-being. Figure 3 shows the share of women who intended to have more children among women who desire more children than they currently have, by their responses to questions about the future: how certain or uncertain they are about it, and whether they think their lives will get better or worse. 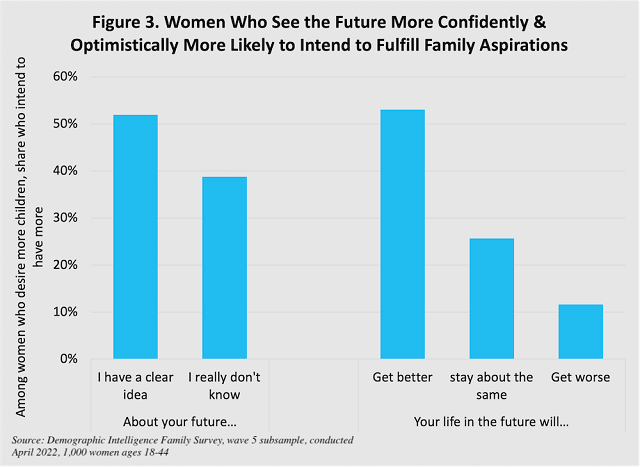 There are enormous differences in fertility intentions even among women with similar beliefs about what would make them happiest, based on their views of the future. Among women who think their best lives include more kids than they currently have, over 50% with clear ideas of what their futures hold or who think their lives will get better do in fact intend to have more children. But among women who are uncertain of the future, less than 40% actually intend to pursue the family they say would make them happiest. Among women who don’t expect their lives to get better, the shares are even lower: 25% of women who expect no change, and just 10% of women who expect things to get worse.

Uncertainty or pessimism about the future can create stress and worry, which can be a trigger for anxiety or depression. Likewise, anxiety and depression can cause a negative outlook for the future. Regardless of the direction of causality, the linkage to fertility is clear: a key reason women undershoot their fertility preferences is because of worry, anxiety, or unhappiness. People experience mental states (some diagnosable as mental illness and some not) that serve as barriers between them and the things they believe would make them happiest.

Up to this point, I have used data from a moderately-sized survey of U.S. women to point to cross-sectional relationships between mental health and fertility intentions and preferences. But there is even more rock-solid evidence of a clear link between mental illness and actual fertility outcomes from a large study linking medical records and demographic outcomes from Sweden and Finland. This study compared sibling-pairs and assessed whether a sibling who was diagnosed with a condition of some kind went on to have different family outcomes than an undiagnosed sibling. This approach ensures comparisons are between genetically similar people with similar upbringings, and isolates the effect of an illness diagnosis on differences in fertility within a family. Overall, the study found that most physical illnesses didn’t affect lifetime odds of marriage or childbearing—digestive, skin, respiratory, cancerous, and other diseases had little effect on family formation.

However, a diagnosis of a mental or behavioral illness had enormous effects: both men and women with mental or behavioral illness diagnoses saw their odds of childlessness triple vs. undiagnosed siblings. The authors find that illnesses generally (mostly mental illness) can explain a reduction in fertility from around 1.7 or 1.8 children for undiagnosed women to around 1.1 children for diagnosed women. Mental handicaps and delusional or psychotic disorders, of course, have the largest effects, increasing odds of childlessness by 10 times, but bipolar disorder, anxiety disorders, and other mood and personality disorders, as well as mental disorders related to opioid usage, all more than tripled the likelihood of being childless. Mental illness has a similar order of magnitude of effect on fertility as epilepsy, cerebral palsy, lupus, or systemic congenital abnormalities. For most mental illnesses, women experienced lower odds of having children, lower odds of having a stable partner, and lower odds of having children even if they had a stable partner.

It's worth noting here that anxiety has been rising rapidly among young adults in America since the late-2000s. After depression symptoms declined among high school girls from 1991 until the mid-2000s, they have rocketed upward since. Some researchers like Jean Twenge argue that increased social media may have caused this rise; the jury is still out on exact causes, but if she’s right, then social media’s negative mental health effects may be a causal agent in the fertility decline of the last decade or two. Knowing that mental health conditions can influence fertility should lead people interested in fertility changes to consider why mental health conditions seem to be worsening.

Mental health matters for family. Obviously, severe and traumatic brain conditions influence family formation, but even less severe conditions like anxiety and depression can dramatically reduce the likelihood that a person finds a stable romantic partnership and has as many children as she desires. As this brief shows, unhappy, anxious, and depressed women do not intend to have more children, even if they believe having more children would make them happier. When we ask why American women are falling further and further behind their stated fertility goals, one part of the answer is indisputably related to America’s poor mental health. Anxious and depressed people routinely report difficulty pursuing actions and behaviors they believe would be good for their lives. That this difficulty might extend to relationships and family is not shocking. As we become a more depressed and anxious society, fertility will continue to suffer as a result.

1. Prior academic research has found that one of the best predictors of whether or not women will have children in the future is simply whether they say they intend to have children. Numerous studies have shown this result. Yes, some childbearing is unintended, but intentions are still very predictive of births. Moreover, it’s important to remember how humans have babies: most of us can’t just choose to have four kids at once. If we say we want four kids, achieving that goal requires us to have them more or less, one-at-a-time; between each child, our life circumstances and desires might change. As a result, the truly relevant demographic indicator isn’t the total number of children a woman desires, but whether a woman who desires more children intends to actually have those children. Some women desire more children but don’t intend to have them: that’s the precise mystery I aim to explore. Thus, my analysis will ask: does a woman’s reported mental health influence the likelihood that she intends to fulfill her childbearing desires?

It’s important to assess if “mental health” and “desires” can be validly measured. Mental health is the most straightforward part of that precisely because it is inherently subjective. If a person says she is sad, depressed, and anxious, she can be diagnosed with relevant conditions; we don’t require some kind of neurological scan or blood test to prove she truly has depression. Thus, mental health can reasonably be inferred from survey questions, and so I use basic questions that come from longstanding population surveys of well-being, or even from clinical diagnostic tests of anxiety and depression.

Turning to desires, this issue is more complicated. Demographers measure fertility desires in many ways, asking about how many children women: wish to have, want to have, personally idealize having, would have if they could do their life over again, etc. In practice, these question wordings all yield very similar results. But I use a unique question approach. Because I’m interested in mental health, I showed my respondents childbearing outcomes ranging from zero children to six children, and asked them to rate how happy they would be if they ended up having that many children. This allowed respondents to give far more detail and nuance than just asking about a single number. I then condensed those results into a happiest average outcome for each woman, compared that to her current fertility, and assessed how many more children that woman said she needed to reach her happiest family outcome. Thus, I assess how mental health is correlated with women’s intentions to try to achieve their happiest family outcomes, or not.