Marriage is declining quickly in the United States, especially among lower-income Americans. What’s worse, this “family polarization” by income seems to have deepened since the pandemic began last year, according to our new report. Needless to say, money plays a critical role in this marriage divide. But if you ask individual Americans on the marriage market today why they are not married, surprisingly, their answers have little to do with money.

In a recent survey by the Institute for Family Studies and the Wheatley Institute, we asked unmarried Americans ages 55 or younger who desire marriage about the reasons why they are unmarried. We found that money is not the main reason some Americans remain single,1 not even among those with lower income. Instead, “it is hard to find the right person to marry” (58%) and “not ready for the commitment” (33%) are the top two reasons unmarried adults ages 18-55 cited. In contrast, only about a quarter of unmarried adults chose economic reasons, such as “can’t afford a wedding” or “don’t have a good job.”

The top two reasons for singleness are the same for those who make $100K + a year as for those whose income falls below $50K. More than half of lower-income unmarried adults (54%) said it is difficult for them to find the right person to marry, and about half of those with higher income agreed. 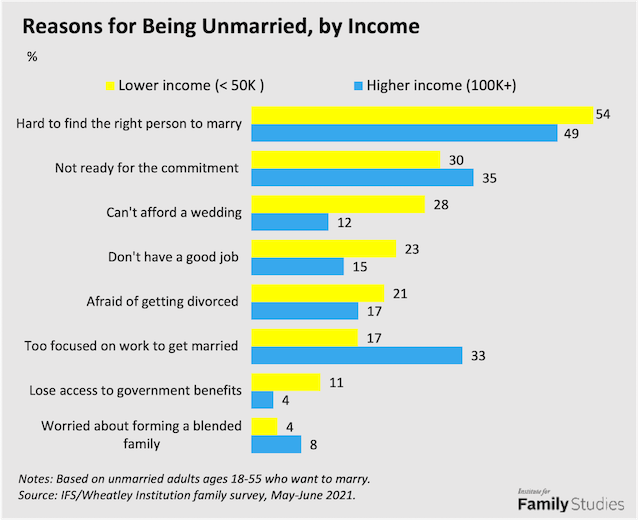 The so-called “marriage penalty” also plays a much more significant role among lower income adults who are not married. More than one-in-ten said that they would “lose access to government benefits like Medicaid, Child Care, Food Stamps” (if they got married), compared with 4% of unmarried adults with higher incomes. Apparently, there is room for policy interventions to boost marriages among lower income adults who desire marriage.

Unmarried men and women are largely in agreement about the reasons why they remain single. The areas where we see a gender difference are related to income or finances. Men are more likely than women to cite “can’t afford a wedding” (27% vs. 21%) as well as “don’t have a good job” (29% vs. 17%) as reasons why they are unmarried (See Appendix for details).

Since finding the right person is the main obstacle for singles who desire marriage, it is important to understand what traits make someone the “right person” in the eyes of unmarried Americans. According to the same survey, the top qualities for an ideal spouse also have little to do with money. A vast majority of unmarried Americans would like their future spouse to be “responsible” (81%) and “emotionally stable” (74%). More than half (61%) said that it is very important for their future spouse to share the same ideas about having and raising children (see Appendix).

Income doesn’t change people’s preference for an ideal spouse. For both higher-income and lower-income singles, the order of these qualities in a future spouse is the same. The only noticeable differences are that lower-income singles are slightly more likely than those with higher incomes to cite “having a good job” as an important trait of a future spouse (41% vs. 37%). Meanwhile, higher-income Americans pay more attention than their lower-income peers to qualities such as “shares the same political views” (35% vs. 30%) and “has a college education” (25% vs. 18%). 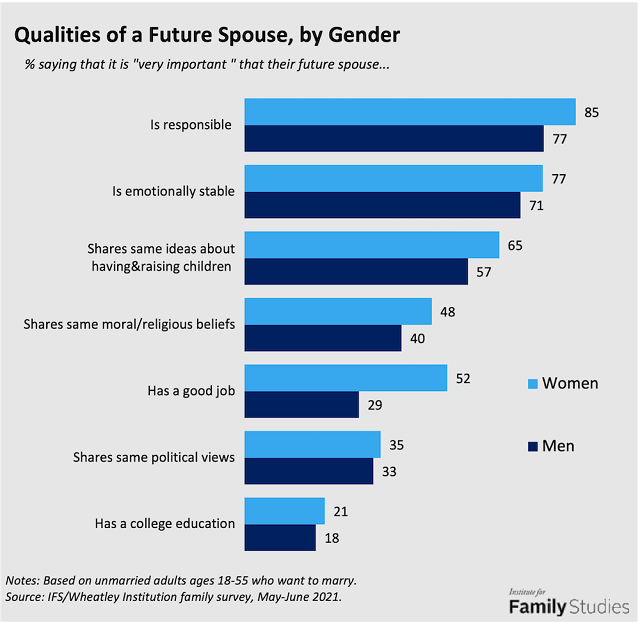 1. “Single” and “unmarried” are used interchangeably in this article, even though some unmarried adults are living with a partner. Unmarried adults include those who have never been married or divorced or widowed. 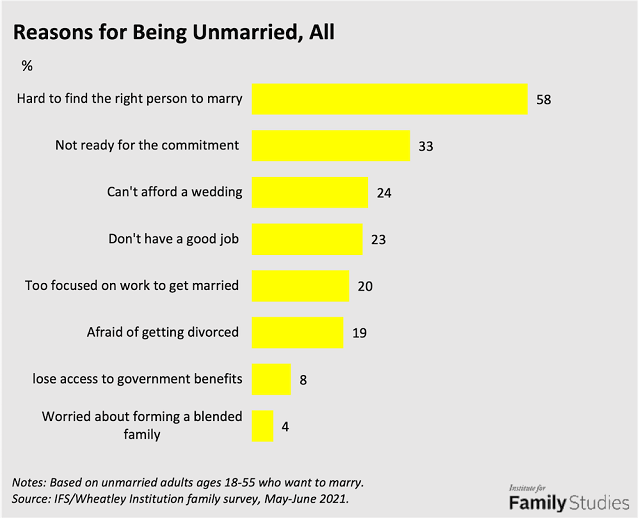 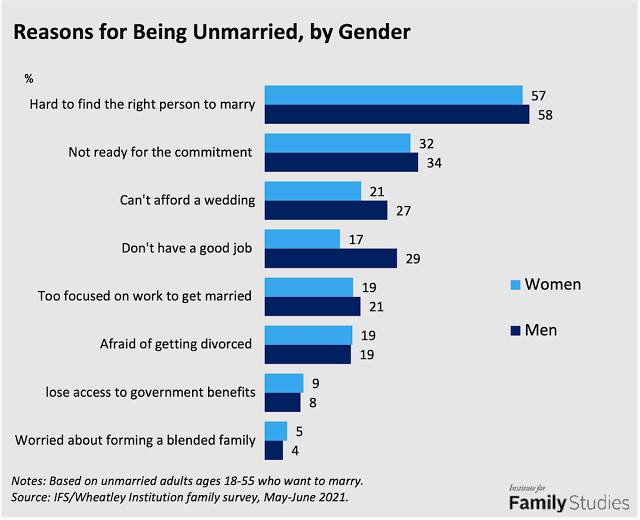 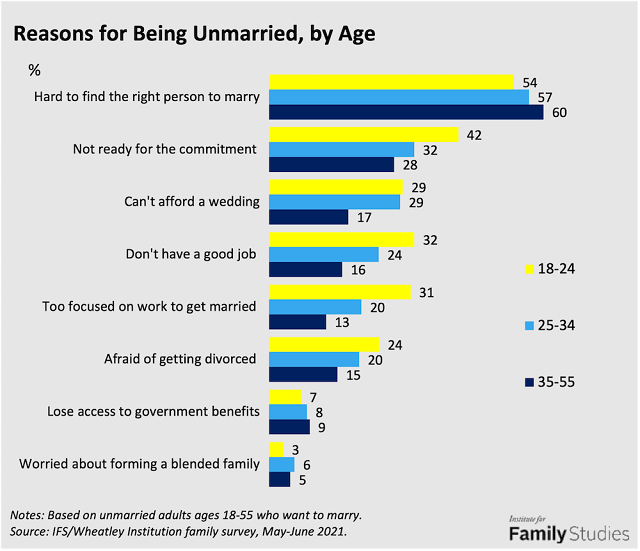 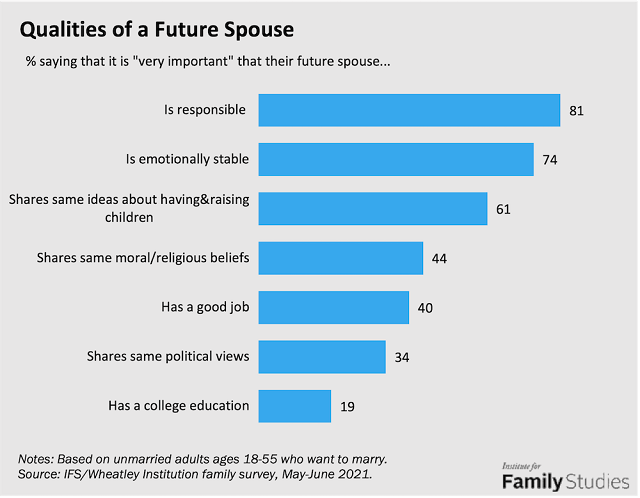 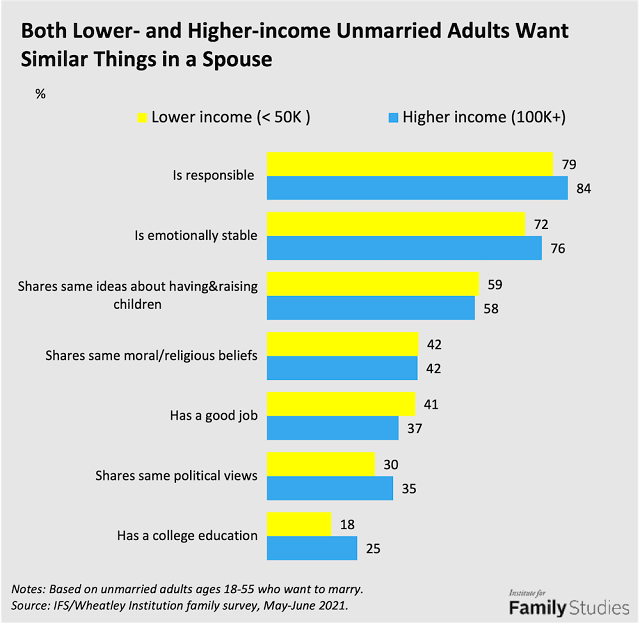