If the 2014 election tells us anything, it tells us that demography is not destiny when it comes to American politics. The Republican Party did better this year among women, young adults, blacks, Hispanics, and singles than it did in 2012, when President Barack Obama relied on the new demographic coalition that the Democratic Party has been building, made up of these groups, to help him chart a path to the presidency for a second time. This year’s election, from Cory Gardner’s much-anticipated Senate win in Colorado to Thom Tillis’ come-from-behind victory in the North Carolina Senate race, tells us that the Republican Party can win even when demographic headwinds in the nation at large are running against the party. 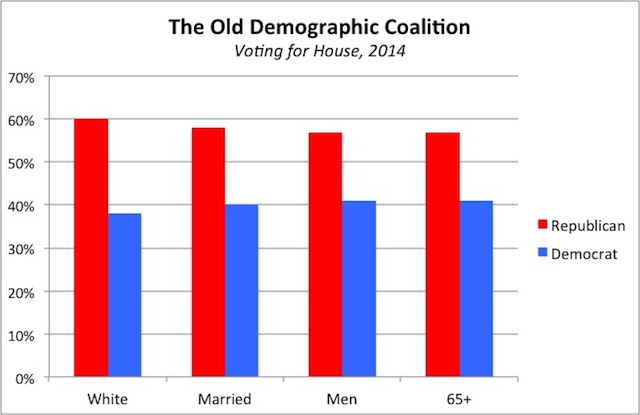 But it would be a mistake to think that demography was not important in this week’s election. The exit polls indicate that the Republican victory was powered in large part by a very strong showing among the groups that make up its older demographic coalition: whites, older Americans, men, and the married. The figure above shows that Republicans running for the U.S. House of Representatives did very well among these groups, and exit polls taken of the 2014 senatorial races suggest that victories like those of Gardner and Tillis were also built upon strong performances among these groups.

Indeed, the Republican path to victory had to run through these groups because, even in 2014, Democrats still outperformed Republicans among African Americans, Hispanics, women, young adults, and the unmarried. The figure below, which illustrates demographic trends in this week’s votes for House candidates, shows that Democrats still did comparatively well among the members of its newer demographic coalition.

These figures also indicate that one of the biggest, but largely unheralded, factors associated with 2014 voting patterns was marriage. Indeed, marital status proved to be more important than gender and age in predicting voting. The marriage gap in House voting stood at 31 points, compared to a gender gap of 20 points and an age gap of 27 points (between 18- to 29-year-olds and those 65 or older).

Moreover, as sociologist Nicholas Wolfinger has found, married Americans are much more likely to vote than their unmarried peers. Indeed, in this election, even though marrieds and unmarrieds now make up equal shares of the adult population, marrieds made up 63 percent of the 2014 electorate, while just 37 percent of the electorate was unmarried. This means that married voters constituted a disproportionate share of the electorate and a disproportionate share of the Republican vote in 2014. To wit: about 70 percent of the Republican vote in this year’s House elections came from married voters.

Why, then, are married Americans markedly more likely to vote Republican? Part of the reason, undoubtedly, is that married Americans tend to be more religious and traditionally minded in their views on social issues, which aligns them with the Republican Party’s more socially conservative stance. Indeed, demographers Ron Lesthaeghe and Lisa Neidert find that community-level measures of family factors are strong predictors of county-level trends in partisan voting, in part because adults in traditional families, who tend to hold more conservative social views, are much more likely to vote Republican.

But economic prosperity, stability, and security also would seem to play a role here. My new report with economist Robert Lerman, “For Richer, For Poorer,” indicates that married Americans enjoy annual household incomes at least $44,000 higher, on average, than their single peers from comparable backgrounds. Not only do they enjoy higher incomes, but married spouses also provide an important measure of economic stability and security to one another: if one spouse loses a job, the other can often pick up the slack, and private health insurance is more common among married Americans. All this means that married Americans are likely to have a higher tax liability, and less need of government support, than their unmarried fellow citizens, both factors that may help push them into the Republican camp. This comparative economic security may help explain why, in this week’s House elections, 61 percent of married men and 54 percent of married women pulled the lever for a Republican. 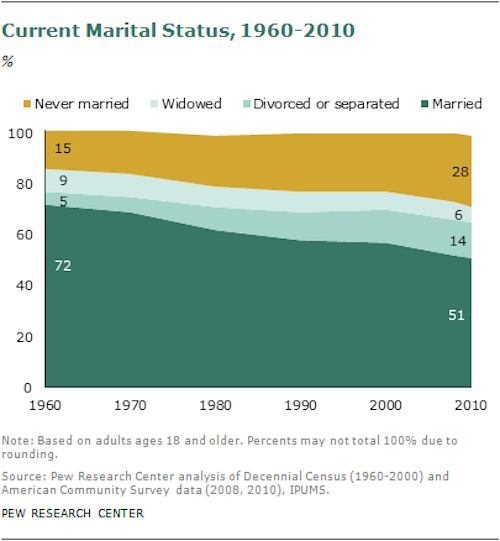 All this suggests that, even though demography is not destiny, it can give a major electoral advantage to one party or the other. And given the fact that the share of married Americans has fallen steadily since thae 1960s, as the graph from the Pew Research Center shows above, the Republican Party’s triumph in 2014 may be short-lived. For the nation’s ongoing retreat from marriage suggests that in the coming decades a shrinking share of Americans will have the relatively conservative cultural orientation or economic security associated with being married to make the GOP, at least as it is currently constituted, an appealing option for them. That is, unless the Republican Party changes its stripes on cultural issues and the advisability of a generous social safety net, or the retreat from marriage in America comes to a halt.

W. Bradford Wilcox, a visiting scholar at the American Enterprise Institute and a senior fellow at the Institute for Family Studies, directs the National Marriage Project at the University of Virginia.