Americans’ disapproval of extramarital sex has dipped in recent years, according to a recent report from Paul Hemez at the National Center for Family and Marriage Research (NCFMR) at Bowling Green State University (covered earlier this week here at Family-Studies). The first possible cause the NCFMR researcher brings up? Those blasted Millennials might have begun to soil the General Social Survey (GSS) with their casual attitudes toward sex, including, apparently, sex between a married person and someone who is not his or her spouse.

No one hates my generation as much as I do, but I don’t think we deserve the blame for this one.

As a GSS nerd, the first thing that stood out to me is that a lot of the data are missing. The survey is conducted roughly every other year, and yet the data presented in the NCFMR report skip forward six to seven years at a time. When we include the missing years, we learn some important details about the question, which asks whether adultery is “always wrong” (as opposed to “almost always,” “sometimes,” or “not wrong at all”).

Until 2008—when it reached a record high of 84.2 percent—strong disapproval of marital infidelity had fluctuated between 77 and 83 percent since 1988, with a modest but unmistakable rising trend. As Figure 1 below shows, between 2008 and 2010, there is a nearly five-point drop all at once, followed by an up and a down of about two and a half points each in the 2012 and 2014 surveys. 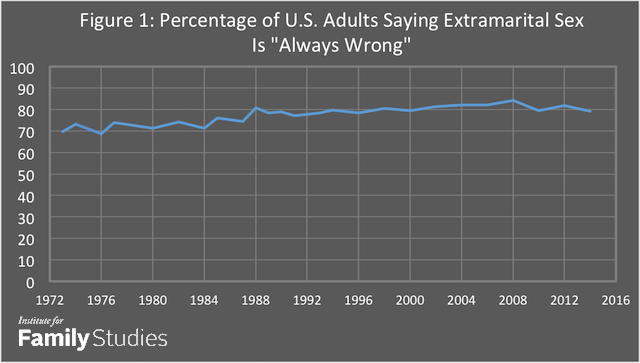 The first possibility to consider is that we are just looking at random fluctuations. Sociologist Philip Cohen has noted that the confidence intervals around the estimates are quite wide (plus or minus three to four points in most years). This would certainly explain the odd pattern in 2010, 2012, and 2014. But it still seems that disapproval was rising slightly until 2008 and dipped somewhat lower thereafter, especially if we combine multiple years to get narrower estimates. (The 1998-2007 period is significantly higher than the 1988-1997 period; the 2010-2014 period is significantly lower than the 2004-2008 and even the 2002-2006 period.)

Generational replacement is a very gradual process, so the increasing participation of Millennials seems an unlikely cause for such a sudden drop-off. But just to be sure, we can break the numbers out by the ages of the respondents. Far from Millennials being a uniquely perverse generation, the overwhelming trend since the 1970s has been convergence in what Americans of different ages think about extramarital sex (see Figure 2): 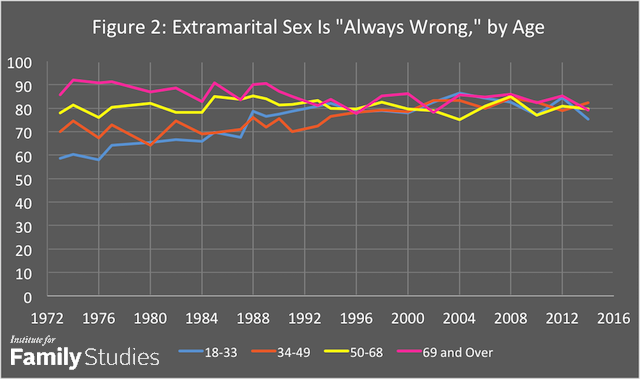 And the 2008-2010 drop, sustained through the 2014 survey, seems consistent across age groups and comparing them amounts to trying to parse randomness. It’s true that in 2014, 18 to 33-year-olds were the age group least likely to condemn adultery unequivocally, by about four points. But in 2012, they were more likely to condemn adultery than every other age group except the elderly, who beat them by less than a point. In 2010, they were about tied with 50 to 68-year-olds, though they lagged the other two groups by about five points. The fact that all the age groups are neck-and-neck is far more interesting than the differences are, especially given the stark age gaps we saw in the 1970s and 1980s.

So what did cause the drop in Americans’ disapproval of adultery? If we’re assuming it’s not a fluke, the rise of pornography is a possibility, as Alysse ElHage argued in these pages. The economy also is a decent candidate. It was already headed south by 2008, but 2009 is the year it bottomed out. There’s some evidence people cheat more during tough times, and their attitudes might go along with their behavior.