Meltdowns and Media: The Costs of Using Screens to Regulate Your Child's Emotions

by Sarah M. Coyne Jane Shawcroft
Back to Blog

We've all been there (or seen it). You are carting your toddler around the grocery store when he starts to fidget and then wiggle. The wiggle moves to a whine, and the whine quickly moves to a full-on tantrum when he spots a toy he wants but that you won't buy him (Such a mean mom!). At this point, the other people in the store are looking your way. An elderly woman is shaking her head and giving you a disapproving look that screams, "why can't you just get your kid under control?" So you resort to a tactic that many parents have resorted to—you pass your kid your cell phone. He stops crying immediately, happily engrossed in Nick Jr. so you can finish your shopping in peace. Problem solved!

Or is it? This type of parental strategy is called "media emotion regulation," and it occurs when parents use media to help regulate their child's difficult emotions. In the moment, this seems to be very effective—the kid stops crying! Everyone wins! But does this simple strategy affect the way kids deal with emotion in general? Are parents more likely to use it with a certain type of child? And might it backfire on us in the long-term, maybe increasing tantrums in general? This is what we aimed to examine in our recent study of media and toddlers.

Infant media use is rising; parents report that on average, children younger than two are on screens for about one hour a day. Young children use media for a lot of different reasons with different developmental outcomes. Some media is great for kids, helping them build closer relationships with family members who live far away or help with math and language skills. However, other forms of media use can hurt a toddler's cognitive development and shorten attention span, especially depending on the content and context of media.

To test this idea, we conducted a study asking parents how often they used media to regulate (or calm down) their toddlers (aged 2-3 years) when they were upset. We found this was relatively common: only 3% of parents said they never use media to regulate their children’s emotions while 19% said they often use it. 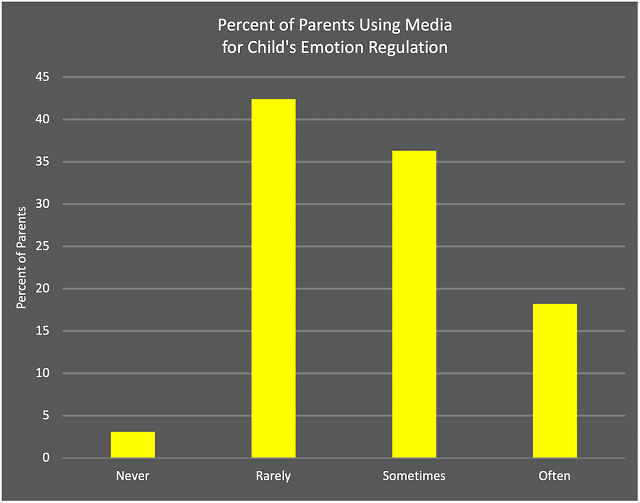 Parents were more likely to use media to regulate their children's emotions if their kids had a difficult temperament (and was more prone to tantrums in general). Parents also gave more extroverted kids media to regulate their emotions. These kids can be high-energy and often demanding. They ask for more social and emotional interaction from their parents (e.g., excessive talking, wanting their parents to play with them a lot). Similarly, children who become upset quickly can wear parents down quickly. These things can make parents reach for media more often to calm their children down when they are upset.

We then had kids watch a "Daniel Tiger's Neighborhood" episode for five minutes. This particular program was about emotion regulation and what to do when you are upset. We unexpectedly stopped the show in the middle of the episode and then watched what the kids did for the next few minutes. We found that toddlers were most likely to tantrum when parents reported they used media to regulate their child’s emotions when upset (even after controlling for temperament in the model). This is one early indicator of problematic media use, which can lead to a media addiction when older teens and adults still rely on media to regulate difficult emotions. We hope to follow these kids over time to see how this behavior develops throughout childhood and early adolescence.

"But my kid can't go to the grocery store/sit in the car/have a meal in a restaurant without having a meltdown," you might argue. Believe me—I have been there. I have five kids (including a toddler), and we have had our fair share of public tantrums. Sometimes, we've resorted to media—after all—it is an excellent tool! The goal is to avoid the habit of reaching for media when your child expresses difficult emotions.

Here are f0ur simple suggestions for other things to try before reaching for the phone or iPad.

1) Validate your child's emotions and show empathy. It is boring to sit in a grocery cart for an hour while your parent goes shopping! I would probably throw a fit, too. So, name the child's emotion, for example, "oh wow, I'm guessing you are feeling bored (or mad or sad) sitting there. I get it—it's okay to feel bored! How can I help you out?" Simply validating and expressing empathy might be enough to deter a total meltdown.

2) Be prepared. If validating and showing empathy doesn't work, then be prepared with a backpack of tools that you can use to help distract your child (that does not include media). This might be a special backpack consisting of toys, stickers, and books that you only use when you go out, so the toys are fresh and new.

3) Stop and think. When your toddler is losing it, it's easy to get emotionally dysregulated yourself. There have been many times that I want to throw a tantrum myself when I'm dealing with a toddler who is freaking out in public! It's embarrassing! It's stressful! Getting dysregulated myself doesn't ever help, so stopping, taking a few deep breaths, and giving myself a second to think goes a long way in helping me deal with the situation.

4) Don’t feel guilty if you use media on the rare occasion. You are not the first or only parent to use media to help a crying toddler calm down, and you will not be the last. When you stop and think, consider—is this an emergency (do you desperately need your child to stop crying now because you are emotionally exhausted and you just started another zoom call for work?) or do you have the resources (emotionally, time, etc.) to use a different strategy? Try to focus on doing something other than using media and save media for emergencies. (Case in point: a long plane ride. As a child development and media expert, I definitely validate all media use on a long-haul flight!) Feeling guilty every time you give your child a smartphone or tablet isn't going to help you or your child. So cut yourself some slack if this happens occasionally.

We are helping our kids to recognize that difficult emotions are okay and that they can use lots of different tools to deal with those emotions. Media can be an occasional tool, but it is definitely not the healthiest one in the toolbox for helping to manage a child's emotions.