Me, You, and Us: We-Ness and Couple Identity

The concepts of we-ness and couple identity arise throughout philosophy, literature, poetry, and social science. I mostly want to describe the latter, but first, I will briefly touch on a couple of the more ancient takes.

Genesis 2 describes how Adam and Eve will be “united and become one flesh.” Although that line is preeminently describing the physical union, the passage resonates deeply with so many because of the implication of a deeper bond. Aristotle wrote, “Love is composed of a single soul inhabiting two bodies.” This goes further than two becoming one. As the writer of philosiblog notes, Aristotle was most likely inspired to write that based on the ideas of his mentor, Plato, who wrote that humans were originally made with two heads, two faces, and four arms and legs. Setting aside other complexities in Plato’s view, he writes that this initial version of humans was a threat to the gods, so Zeus had them split in two. The now half-not-whole beings were consigned to spend their days searching for their other half.

Both of these ancient thoughts hover around the nature of individuality and oneness, but the nuances and traditions around them are different in how they relate to views of mating, love, and marriage. In one view, two identities were intentionally created with the idea that they would seek to be one in core aspects of life. In the other, one entity was split into two for the express purpose of inflicting a weakness. There are doubtless many variations of these ideas in every culture that ever existed.

As these and other themes suggest, there is a fundamental human drive to seek and be in a relationship that has this quality of “us.” To join with another. Beyond this central fact, there are healthier and less healthy views of what “becoming us” can be like. Here, I describe how this notion arises in my field of the study of commitment in intimate relationships.

I first heard the term “we-ness” in graduate school. That was awhile ago but well after Aristotle wrote things down. In talking with other research psychologists about relationships, the term would come up from time to time, denoting a relationship where two people had formed a depth of connection that supported a sense of shared identity.

There is a healthy idea of we-ness that does not imply either enmeshment or finding perfection in a partner.

When I turned my focus to the study of commitment in 1983, I found supporting ideas consistently arising in that literature. Harold Kelley and John Thibaut described how two partners who were growing in interdependence would move from having only individual goals to developing a view of the future based on joint outcomes.1 They called this “transformation of motivation.” Although they almost never used the word “commitment,” what they were describing was the psychological formation of it. Similarly, George Levinger noted that ‘‘as interpersonal involvement deepens, one’s partner’s satisfactions and dissatisfactions become more and more identified with one’s own.”2 Social exchange theorists such as Cook and Emerson discussed how the “transformation” from me to we changed a relationship from an exchange market where two individuals were competitors to a non-competitive relationship that could maximize joint outcomes.3 One is no longer seeking (only) individual gains from the other, but something for us as a team.

I came to view commitment between two partners as the condition where a strong sense of “us with a future” has emerged.

One of the most influential scholars in the field of commitment in psychology was Caryl Rusbult, who, along with her many colleagues,4 framed and refined a theory of interdependence drawn largely from the work of other interdependence theorists such as Thibaut, Kelley, and Levinger. Her early work focused on how commitment developed in relationships, with increasing mutual investments, curtailing of attention to alternatives, and a deepening desire for a future with the partner. It was in a publication in 1998 by Agnew, Van Lange, Rusbult, and Langston5 that I first noticed a writer in social science using the term “we-ness.” They used the term in contrasting friendships and romantic relationships, suggesting that because sexuality was in play in the latter, there was a stronger possibility of two individuals merging into one in a way that fostered we-ness. Not really that far from the ideas of the ancients.

In 1986, I had developed a set of measures for assessing commitment in romantic relationships, dividing the world—as had the sociologist Michael Johnson6 before me—into the broad themes of dedication and constraint. I described subconstructs of those two dimensions and developed measures of them that Howard Markman and I published in 1992.7

I defined couple identity as “the degree to which an individual thinks of the relationship as a team, in contrast to viewing it as two separate individuals, each trying to maximize individual gains.” In trying to assess whether or not a person had a sense of a shared identity with their partner, some of the items go right to the concept of “me” vs “we.” For example:

Or, in the reverse:

I want to keep the plans for my life somewhat separate from my partner's plans for life.

We-ness and Me-ness in Modern Times

Discussions of we-ness raise concerns about psychological enmeshment. In discussions with others in psychology, the term “we-ness” always arose as a positive thing, and a characteristic of a thriving relationship. If a relationship was otherwise safe and healthy, we-ness was good, but the dark side of the coin is enmeshment, which implies the obliteration of one or both identities in some manner.

I have long described a healthy sense of a couple identity with images. These are just a few of the possibilities: 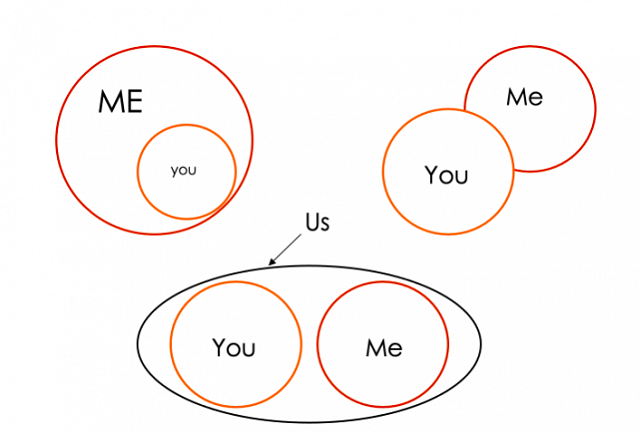 The top left image is one of many possible depictions of enmeshment. One person’s identity is absorbed into the other. The top right image reflects two lives being connected but without having developed an identity of us—or at least, not yet. The final image is meant to portray a healthy, clear sense of us, while retaining a clear understanding that there are two separate individuals. Three identities: You, me, us. You could certainly draw versions of the image on the bottom that reflect individual identities that are largely included in the “us” but with parts unshared or less shared, such as about work or deep interests of the individual identities that are not so clearly a part of what the essence of the “us” is. The key point is that, in a strongly committed relationship, there will be some identity of us, and it will have a boundary.

In some relationships, there is a painful reality where both the top right and bottom drawings reflect the reality of the relationship, with one partner wanting the former and the other preferring or only capable of the latter. Those are situations where one partner is substantially less committed than the other, and likely a lot less willing to have, develop, or nurture that third identity.

Although there is no data that I know of that could directly test this, it seems evident that modernity has fostered ever greater levels of individualism. It is not hard to posit that this complicates the development of relationships characterized by having a shared, couple identity. Yet this is true in the same era in which we also see an emergence (or re-emergence?) of a desire for a relationship of a sort described in a famous line from the movie Jerry Maguire: “You complete me.” Aristotelian elevator talk, really. That’s not just you and me developing a sense of us, that third identity, it’s “I am not whole without you.”

All these ideas touch on the concept of soulmates. There are versions of this idea that are appealing, but I believe it has two problems. First, it implies that there is one perfect match out there for each person. Second, it supports the illusion that finding that person would make love and marriage blissful. But that search becomes formidable, and there are negative effects of holding expectations that your soulmate will complete you in only the most wonderful way. That might be the resolution of the paradox of a growing individualism overlapping with a growing desire to find one’s soulmate. It would take a relationship with astounding gravity to overcome the escape velocity fueled by individualism.

There is a healthy idea of we-ness that does not imply either enmeshment or finding perfection in a partner. Not everyone wants we-ness. Some may desire it but avoid it out of problems with attachment that may be directly linked to childhood experiences. But, for those who want the “us” in their life, they will have to look for a relationship with the right balance of me and we, and then invest in protecting it. Two perfect partners are rarely joining as one, but two imperfect partners can get pretty far in life if they nurture the sense of “us with a future.”

Scott M. Stanley is a research professor at the University of Denver and a senior fellow of the Institute for Family Studies (@DecideOrSlide).

4. There are so many citations emanating from this work, but a couple of classics are: Rusbult, C. E. (1980).  Commitment and satisfaction in romantic associations: A test of the investment model.  Journal of Experimental Social Psychology, 16, 172-186.; Rusbult, C. E., & Buunk, B. P.  (1993) Commitment processes in close relationships: An interdependence analysis. Journal of Social and Personal Relationships, 10, 175 204.

The Truth Hurts Less: Pornography Use Disclosure vs. Deception

What Did the Pandemic Teach Us About Online Relationship Education and Therapy?