Marriage, Discouraged? Let’s Listen to the Poor Themselves

Does welfare discourage marriage today? This is certainly a question worth pondering, given that one of welfare reform’s goals in 1996 was to strengthen two-parent families and that marriage is an important pillar of the American Dream. Progressives, as I noted in a recent post on this blog, tend to discount the possibility that ordinary couple’s decisions about marriage and childbearing are much affected by the benefits and penalties associated with means-tested programs like Medicaid, Supplemental Nutrition Assistance Program (SNAP, or food stamps), and Temporary Assistance for Needy Families (TANF). This view was well articulated by California State Senator Holly Mitchell (D-Calif.), who said, “I don’t know a woman—and I don’t think she exists—who would have a baby for the sole purpose of having another $130 a month.”

Indeed, my recent report, Marriage, Penalized: Does Social-Welfare Policy Affect Family Formation, suggests that means-tested policies in America do not play a major role in discouraging marriage in America. But that doesn’t mean they play no role in the marriage decisions of low-income Americans. 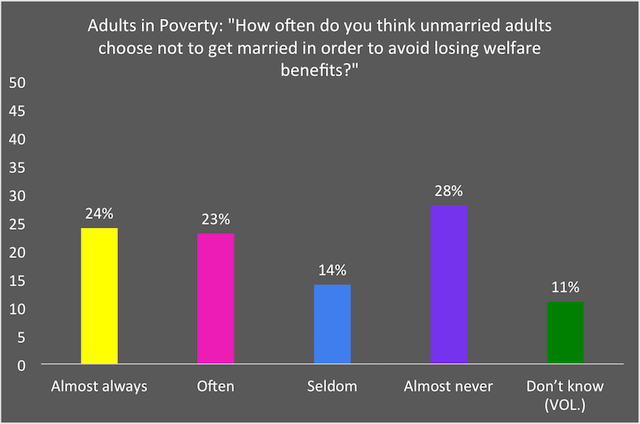 Indeed, a large minority of the poor themselves report that means-tested benefits discourage marriage (see figure above). According to the 2016 Poverty Survey, just released this month by the American Enterprise Institute and the Los Angeles Times, 24 percent of the poor report that unmarried adults “almost always” “choose not to get married in order to avoid losing welfare benefits.” And another 23 percent of poor Americans report that unmarried adults “often” don’t get married for fear of losing welfare benefits.

And, as the figure below indicates, a substantial share of non-poor Americans also think that social-welfare benefits discourage marriage. 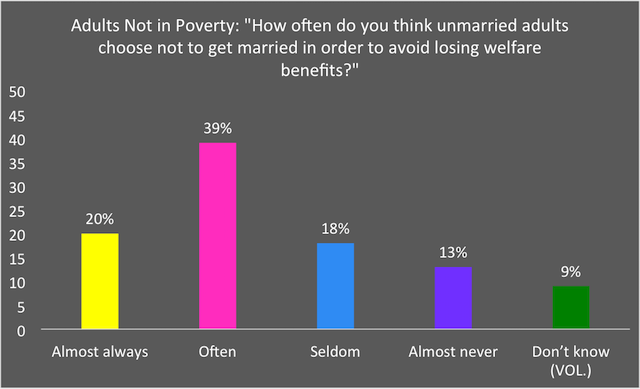 Given the increasingly segregated character of American life, where better-educated and more affluent Americans tend to have less and less contact with their fellow citizens, my inclination is to discount the attitudes of non-poor Americans on this issue. The non-poor may not really know what they are talking about on this question.

But the views of poor Americans about the relationship between social-welfare programs and marriage are more worrisome. The poor are more likely to know people who have made real-world decisions to avoid or postpone marriage for fear of losing government benefits. And clearly, a large minority of poor Americans think that social-welfare policies are discouraging marriage.

It’s for that reason that I think Democrats and Republicans should explore policy reforms—from increasing the income threshold for married couples with children to easing the distinctive work requirements that many states have in place for two-parent families receiving cash welfare—that would make the American welfare state more marriage friendly. After all, no one wants our public policies to force lower-income families to choose between material assistance and marriage.

Editor’s Note: A version of this piece first appeared at the American Enterprise Institute and is reprinted here with permission.