Marriage, COVID-19, and Hunger in America

It is hard to imagine that hunger would still be a problem in the U.S., one of the world’s largest food-producing countries. Yet, the reality is that about 9% of adults reported that there was not enough food to eat in their household, according to the new weekly Census Household Pulse Survey, which tracks COVID-19’s impact on households across the nation. And this was prior to nationwide lockdowns that began March 13, 2020.

This hunger problem intensified over the next two months after the lockdown, and by mid-May, the share of adults in households without enough food to eat rose to 11%. Parents with young children at home, especially unmarried parents, are particularly at risk. In the same Census survey, conducted during the week of May 14-19, 22% of unmarried adults with children under age 18 said they lacked food, compared with 10% of married parents.

These estimates are lower than results from the recent COVID Impact survey and other surveys, possibly because of the differences in question wording as well as the survey design. In the Household Pulse Survey, the question was worded: “In the last 7 days, which of these statements best describes the food eaten in your household?” If respondents selected, “sometimes not enough to eat” or “often not enough to eat,” they are considered to not have sufficient food.

It is difficult to gauge hunger in a household via self-reported surveys. Traditionally, the U.S. Department of Agriculture uses a series of questions to measure food security, including general questions like “couldn’t afford to eat balanced meals” or worrying about whether “the food would run out.” Other specific questions include whether the respondent was “ever hungry in the past 12 months because they didn’t have enough money for food,” or they “lost weight because there wasn’t enough money for food in the past 12 months.”

Based on a combination of these measures, an estimated 11% of U.S. households were food insecure at least some time in 2018. Different from the traditional Census surveys, the new Household Pulse Survey is a quick online survey designed to track week-by week-changes of the impact of the pandemic on households. Despite the differences in survey designs, the food security estimates generated from the Household Pulse Survey are not far from the traditional measures.

Even with imperfect measures, we see that food insecurity is indeed an issue in many American families. And it has become more widespread since the COVID-19 crisis began. However, some people fare much better than others when it comes to having enough food on the table for their families. And marriage plays a key role in this. 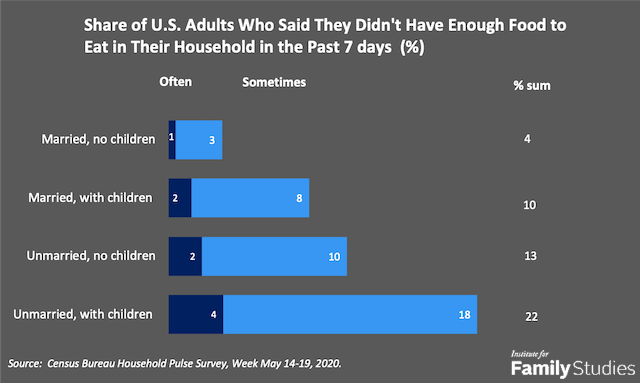 Comparing food insecurity by marital status and whether children under age 18 live in the household, we find that unmarried adults with children are the group with the highest risk of hunger amid the pandemic. More than one-in-five adults in these households said they did not have enough food to eat in the week prior to mid-May. Most of these adults reported that this happened "sometimes" in the past week (18%), and 4% said this was "often" a problem in the past week. Unmarried adults without children under age 18 in their household also have a higher chance of experiencing hunger. A small share (2%) said they often didn’t have enough food to eat, and 10% said this happened sometimes in the week prior to mid-May.

It is tempting to assume that these differences by marital status are due to the financial situation in different households. But with the unique situation created by COVID-19 lockdowns, food insecurity does not only mean a lack of money. In a list of questions regarding why the respondents didn’t have enough to eat, we find that financial reasons apply to 80% of parents who were having difficulty bringing to food to their table. But some logistical issues, such as “the stores didn’t have the food I wanted” and “afraid to go out to buy food,” are also important to the food insecurity during the pandemic. About 1-in-5 adults with children in the household said that the stores (they shop) didn’t have the food they wanted to buy, and 20% of married parents were afraid of the virus spreading or didn’t want to go out to buy food. 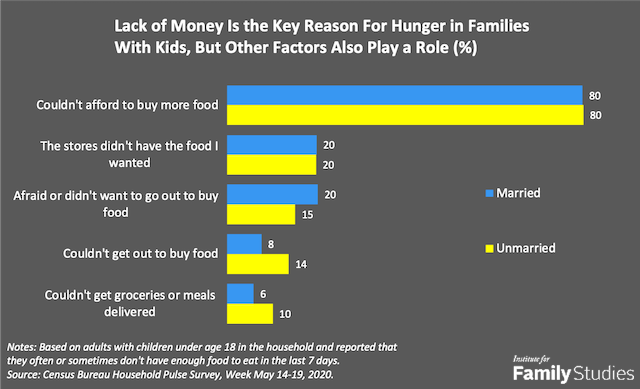 Compared with unmarried adults, married adults overall are better off financially and they are also more likely to be college-educated. During the pandemic, job losses among married adults are a lot lower than among unmarried adults. As we know, income, college education, and job loss are all linked to food security. However, in a regression model that controls for these three factors, as well as background information including number of children in the household, age, gender, and race of the respondents, married adults are still significantly less likely than single adults to report that they experienced food insecurity amidst the COVID-19 pandemic.

The protecting effect of marriage on families is also reflected in their confidence about food security going forward. In the same Household Pulse Survey, respondents were asked about their confidence in the ability of their household to afford the kinds of food they need for the next four weeks (see figure for wording). Overall, married adults were more likely to have confidence in their ability to afford the food they need for their families than unmarried adults. Among adults with children under age 18 at home, close to 70% of married parents said they are confident about their future food security, compared with 46% of unmarried parents.

It is important to note that confidence about food security is very low for adults who are currently suffering a food shortage, especially those with children. Only 10% of adults with children in their household said they were either moderately or very confident that their household would be able to afford the kinds of food they need in the next four weeks, while the majority are not at all or somewhat confident about being able to have enough food to eat.

The low confidence in food security among these adults indicates that hunger in America is likely here to stay. It is disheartening to see that a growing share of families are struggling to put food on the table for their kids. And even for families who do have enough food, a growing share say they are not eating the kinds of food they desire. Before the March 13 shutdowns, 23% of adults said they don’t always have the kinds of food they want to eat, and the share rose to 34% by mid-May. For many American families, hunger not only means not having enough food, but also lacking the right kinds of food—the fresh and nutritious food that children and adults need.

Marriage clearly plays an important role in protecting children and families from hunger. Children with married parents are more likely than those with unmarried parents to have sufficient food to support their growth. This difference cannot be solely explained by the social-economic factors in these households. Moreover, children living with married parents also tend to have better eating habits. Previous studies show that parents and caretakers play an important role in shaping children’s eating patterns, and a study based on Korean data suggests that children living with both parents are more likely than their peers with single parents to eat healthier foods, even after controlling for household income and other background factors.

While our nation is going through the COVID-19 crisis, it is important to acknowledge that marriage matters, even when it comes to putting food on the table.