Editor's Note: A PDF version of the following report can be downloaded here.

A growing number of children in developed countries today are being raised by parents who are living together but not married. Some argue that cohabiting parents provide a family environment that is comparable to a married household, given that the children are being raised by two adults. However, a new survey of 11 developed countries shows that large shares of cohabiting couples with children under age 18 doubt that their current relationship will last, especially in comparison to married parents. Moreover, cohabiting parents in most countries are less likely than married parents to see their relationship as a vital part of their life.

Among the 11 countries surveyed, the United Kingdom tops the list of relationship doubters when it comes to cohabiting parents. About 4-in-10 UK cohabiting couples with children under age 18 in the home (39%) say that in the past 12 months, they’ve had serious doubts that their relationship with their partner will last, according to the Global Family and Gender Survey (GFGS). The corresponding share is 36% in the U.S., 35% in Australia, 34% in Canada and Ireland, and 31% in France. Across the Anglosphere, cohabitation is perceived as markedly less stable than marriage by parents. 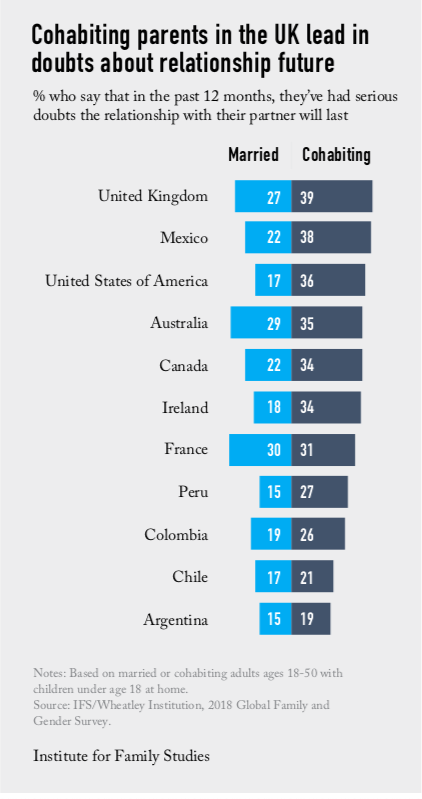 Cohabiting parents in South America are less likely to express relationship doubts. For example, only 19% of cohabiting couples in Argentina (bottom of the list) reported that they have serious doubts about their relationship.

Nevertheless, married couples with young children in these countries generally have more confidence in their relationship than do cohabiting parents. In the UK, the share of married parents who have serious doubts about their relationship is 12 percentage points lower (27%). For U.S. parents, the difference is 19 percentage points. The smallest difference between the two groups is in France, where 30% of married parents have serious doubts about their relationship, and 31% of cohabiting parents feel the same.

In six countries (Canada, Ireland, Mexico, Peru, the UK, and the U.S.), the difference in relationship doubts between cohabiting and married couples remains significant in regression models that control for respondents’ education, age, gender, sexual orientation, economic status, and whether they are foreign born.

In the Global Family and Gender Survey, married and cohabiting parents were also asked whether they agreed with the statement, “My relationship with my partner is more important to me than almost anything else in my life.” Overall, cohabiting parents are less likely than married parents to agree that their relationship is vital, but the difference varies across countries. 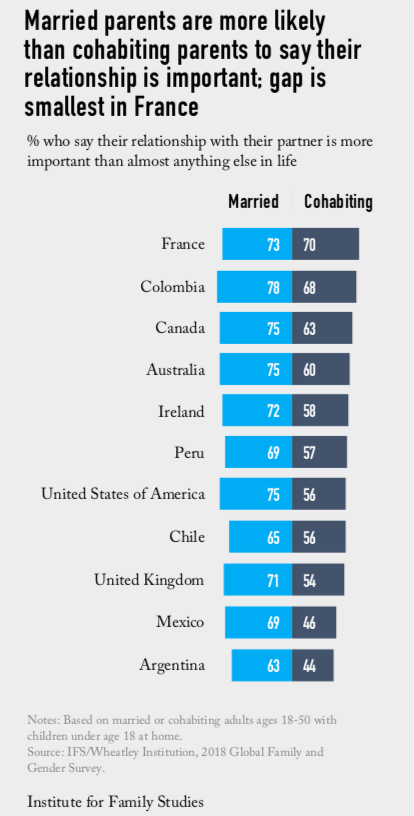 In almost all the surveyed countries, fathers are more likely than mothers to affirm the importance of their relationship with their partner, regardless of their marital status. For example, 65% of cohabiting dads in the UK believe their relationship is more important than anything else in life, compared with only 49% of cohabiting moms. Also in the UK, the corresponding share among married fathers is significantly higher than that of married mothers (77% vs. 66%). This pattern may reflect the fact that mothers are more likely than fathers to prioritize their children over their partner.2

Cohabiting Parents Are Less Satisfied With Family Life, But Not in All Countries

On the other hand, less than half of cohabiting parents in Canada (48%) reported high levels of family life satisfaction, and the corresponding shares are also relatively low in Australia and France. 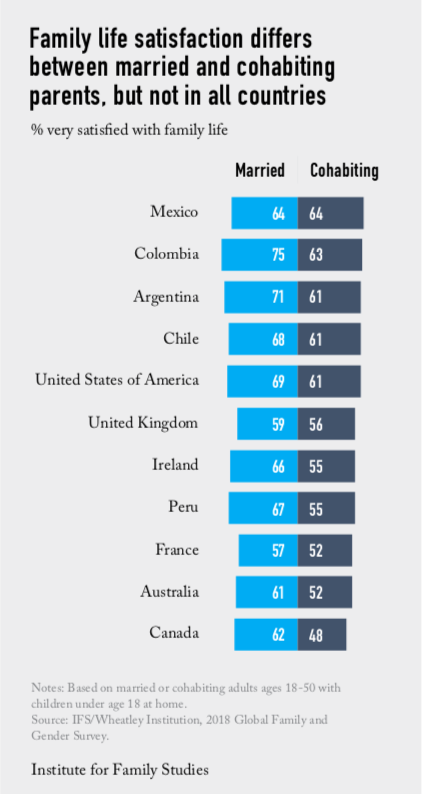 In general, the findings in this Institute for Family Studies Research Brief correspond to research indicating that cohabiting families tend to be less stable for children than married families. Data from our 2017 World Family Map report indicate that children born to cohabiting parents in Europe and the United States are about 90% more likely to see their parents break up, compared to children born to married parents.4 The differences in perceived stability between married and cohabiting parents in many countries across the developed world, which are highlighted in this brief, parallel this finding.

The Global Family and Gender Survey also suggests that one factor explaining the stability premium for family life associated with marriage is commitment. Specifically, this brief finds that married parents are more likely to attach greater importance to their relationship, compared to cohabiting parents.

Differences in stability between cohabiting and married families are noteworthy because children are more likely to thrive in stable families.5 That’s because children tend to do better when their lives are marked by stable routines with stable caregivers. This brief, then, suggests that in many countries across the Americas, Europe, and Oceania, children may be more likely to experience such stability in a married family than in a cohabiting family.

3. In four countries (Argentina, Canada, Colombia, Ireland), the difference in family life satisfaction between cohabiting and married couples remains significant in regression models that control for respondents’ education, age, gender, sexual orientation, economic status, and whether they are foreign-born.

5. Andrew J. Cherlin, The Marriage-Go-Round: The State of Marriage and the Family in America Today (New York: Knopf, 2009).

Findings in this brief are based on data from the recent Institute for Family Studies/ Wheatley Institution Global Family and Gender Survey (GFGS).

The survey was conducted September 13-25, 2018, among adults ages 18 to 50 in 11 countries: Argentina, Australia, Canada, Chile, Colombia, France, Ireland, Mexico, Peru, the United Kingdom, and the United States of America.

Survey interviews were conducted online in English, Spanish, French, and Quebecois languages (depending on the languages used in each country) under the direction of Ipsos Public Affairs (formerly GfK). A combination of samples from the KnowledgePanel and Opt-in panels were used in the survey. The U.S. sample was from Ipsos’s KnowledgePanel, a probability-based web panel that is representative of the U.S. population. Samples in other countries were selected from Toluna’s Opt-in panels.

Lesbian, gay, bisexual and transgender (LGBT) adults are included but are not analyzed separately. Children in this analysis refer to biological, adopted, or step-children of respondents.