Is Digital Media Complicating How We Define Infidelity?

Most of us can probably name at least one friend or acquaintance whose marriage has ended following an affair that began online. Many of these relationships started out rather innocently with a friend request or maybe some casual text messaging, but over time, progressed into something more. One broken-hearted husband I know was blind-sided when his wife of nearly 20 years left him and their three children for a “Facebook fling,” as he put it.

According to The Washington Post, “digital infidelity” is one of many “threats to modern love,” with therapists increasingly treating couples for “remote infidelity” or emotional affairs that take place via smart phones. Some studies have suggested a link between social media use and marital problems, including divorce. As Jeffrey Dew reported here, his study of 1,300 married couples found that the more time husbands spent on social media sites, like Facebook, the worse both they and their wives felt about their marriage.

University of Minnesota professor Steve Harris, Ph.D., who directs the university’s Couple and Family Therapy Program, agrees that digital media represents “a pretty big threat to contemporary marriage” in part because it lifts so many previous barriers to infidelity.

“With digital communication being so ubiquitous, there are just so many more chances to connect with people we would never have been connected to in the past,” Dr. Harris told IFS in an email interview. “Or if we were interested in connecting with someone, we would have had to go through many more steps, and traceable steps to do so.”

The privacy that digital media provides, along with increased access to “old flames” or interesting strangers, not only makes it easier to cheat but also may be "muddling" the definition of cheating, especially when it comes to some online behaviors. That’s the takeaway from a new national poll on American attitudes about adultery commissioned by the Deseret News. The study, Adultery in the Digital Age in the U.S., is based on a nationally representative survey of 1,000 American adults (and an oversample of 250 Mormon adults) conducted for the Deseret News by YouGov and Y2 Analytics. Participants were presented with 11 behaviors, ranging from following an ex on social media to kissing someone other than your partner, to determine what counts as cheating today for most Americans. 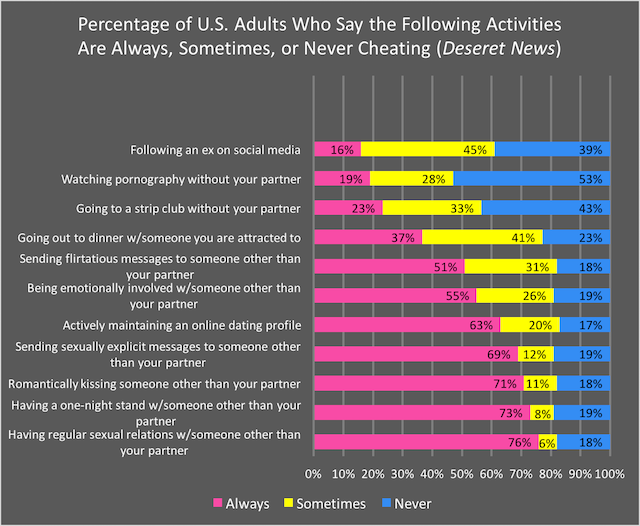 Source: Deseret News, "Adultery in the Digital Age in the U.S.," April 2017 (Question: "How often, if ever, would you say the following activities would be cheating on your spouse or partner?"). 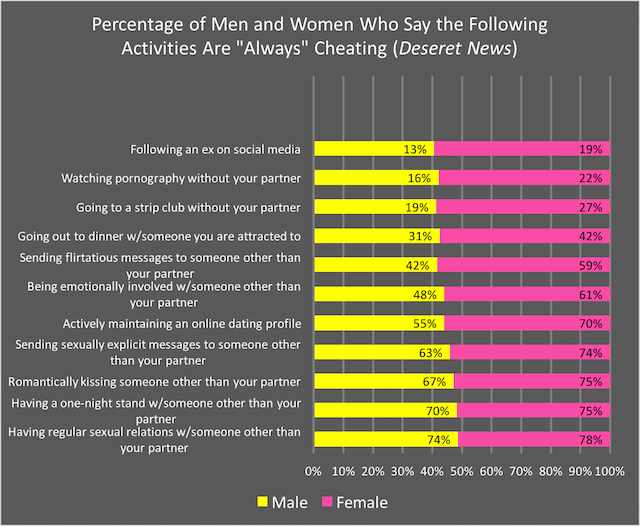 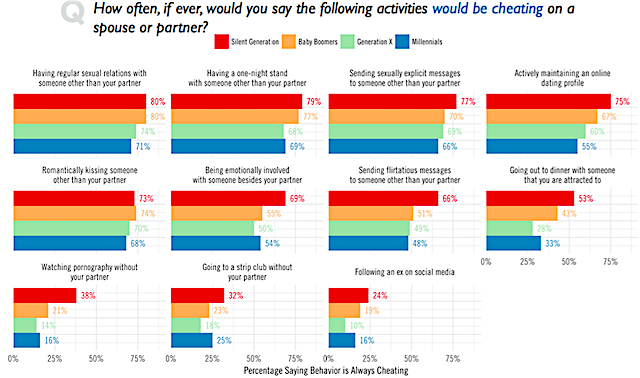 How We Define Cheating Matters—For Marriage

A lack of consensus about what counts as cheating can be problematic for romantic relationships, which is why communicating about these issues is important. To guard a marriage against the confusion surrounding digital behaviors that might open the door to infidelity, Dr. Harris advises couples to discuss and define their boundaries early on. But he warns that having these conversations with a romantic partner or spouse can be tricky.

“It can be a bit like signing a prenuptial agreement—why would you want me to sign unless there is some actual risk of divorce? If I bring it up, am I saying, ‘I don’t really trust you’ to some degree?” he says. “Can I really ask, ‘what is your definition of cheating?’ without making it seem like I'm looking for a loophole?”

He suggests it might be better for couples to discuss digital behaviors in the contexts of “friendships, especially with members of the opposite sex, and expectations about how you both are going to handle friend requests and social media.” He adds that determining how far is too far when it comes to digital media behaviors is a “bit like defining pornography”:

'I know it when I see it’ is a pretty good guide for extramarital affairs. You know when you're starting to give your heart to someone, and that you need to put distance between you and that person in order for it not to grow into something that could jeopardize your marriage.

Since infidelity, including digital cheating, “tends to thrive on secrecy,” Dr. Harris suggests:

The good news is that with all the attention on digital media these days, “couples are getting better equipped with techniques and strategies for guarding their relationships.” But whether the issue is online behavior or real-life activities that could threaten a marriage, “Intentionality is key,” Dr. Harris emphasizes. “Intentional couples will put rules and guidelines in place to help guard against slipping into extramarital affairs.”

Alysse ElHage is editor of the Institute for Family Studies blog.