Infidelity: What They Don’t Know Won’t Hurt Them?

A fascinating new study digs deep into how “extradyadic sex” (EDS)—also known as “infidelity,” at least for those not in open relationships—affects married and cohabiting partnerships. Its results are surprising: A breakup is more likely if you are faithful to your partner but know they are not faithful to you. But “mutual” cheating doesn’t make unions measurably less stable, and neither does one’s own cheating.

I’m not entirely convinced, for reasons I’ll explain in a second. But this should inspire—and greatly inform—much more work on the topic.

The research takes advantage of the National Longitudinal Study of Adolescent to Adult Health (“Add Health”), which is tracking thousands of Americans over time. Wave IV of the survey, conducted in 2007-2008 when the respondents were 24-32 years old, asked them if they and their partners had been faithful in their current or most recent relationships.

This allows the new study to separately analyze three different experiences with infidelity: cheating oneself while a partner is faithful; knowing that a partner has cheated while being faithful oneself; and “mutual” cheating. Here’s how the basic numbers shake out: 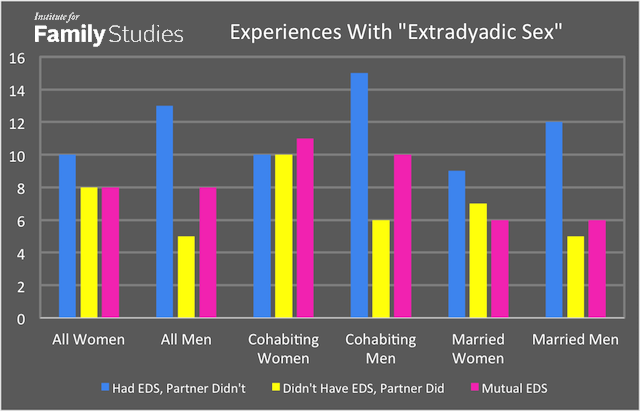 From there, the authors build statistical models that take into account a wide variety of factors, including whether the relationship was a cohabitation or a marriage; demographics like age and race; and a slew of other variables like alcohol and drug use, whether the individual lived with both parents in adolescence, and sex partners in adolescence and early adulthood.

Quite consistently—across both genders, and across both marriages and cohabiting relationships—they find that what really hurts is when a partner cheats, which more than doubles the risk of a breakup in the most comprehensive model. However, cheating oneself is not associated with union dissolution, and neither is mutual cheating; those findings are always statistically insignificant, usually tiny, and sometimes even negative.

There are two reasons I’m skeptical. One is simply that I have a strong prior belief1 that cheating and breakups go together, even in cases where the partner doesn’t find out. The list of reasons is long: cheating can be a sign of a bad relationship; successfully hidden cheating may cause feelings of guilt that poison the relationship; some cheaters leave their partners for the people they cheated with (a phenomenon known as “mate poaching” by the outside party). It will take more than one study, even a good one, to dislodge this belief.

But the second reason is that the results don’t quite add up. I don’t mean the authors did anything wrong, just that there’s a paradox here that future research should seek to resolve.

Consider two numbers from the chart above (setting aside the mutual-cheating scenario): 13 percent of men report cheating in their relationship, while 8 percent of women report that their partner cheated. As the authors note, the obvious explanation for the gap is that many men successfully conceal their infidelity.

But most don’t. Eight is roughly 60 percent of 13—suggesting that, in most relationships where the man cheats, the woman finds out about it. How, then, can they have such different breakup hazards, with cheated-on women at more than double the risk (relative to relationships with no cheating) but cheating men unaffected? A similar point applies if you reverse the genders.

I ran my thinking by the study’s lead author, Michelle Frisco of Pennsylvania State’s Department of Sociology and Criminology, via email. She responded:

Everyone who reports partners’ EDS (men and women) has an increased risk of union dissolution. We don’t have couple-level data so the men and women in the study are not in the same relationships. We suspect—but have no way of testing given data limitations—that those reporting EDS have been able to conceal it, and thus, since it is not known, the respondents reporting EDS have no reason to leave, nor do their partners. Conversely, we suspect that those reporting partner EDS did discover it, and this increased their odds of leaving. I think that future research with couple-level data could test our explanation and I'd be quite interested in the results. Unfortunately, the data on EDS are really limited.

As I mulled Frisco’s response, two limitations of the Add Health data struck me as particularly important. First, as she implied, there can be delays between 1) cheating, 2) getting caught, and 3) getting dumped—so cheaters interviewed before the final step may have reported doomed relationships as “intact,” whereas the study’s cheated-on respondents by definition had reached at least Step 2.

Second, cheaters interviewed after Step 3 may also have reported intact relationships, and may not have identified themselves as cheaters at all, so long as they promptly took up with someone else when the relationship ended—recall, the questions pertain only to respondents’ current or most recent union. In other words, if the cheated-on take longer to start new relationships than cheaters do, as intuitively seems likely, the study will be more likely to capture a dissolved relationship through an interview with the cheated-on party than with the cheating party. It will take much more fine-grained data to sort this out.

Finally, though they were not the focus of the study, several other results stand out:

Infidelity isn’t merely a salacious and inherently interesting topic; it affects some of the most important relationships in our lives, with ramifications for our children and our own happiness. This study makes inroads toward understanding the consequences.

1. I put it that way to make myself sound Bayesian rather than biased.

2. In their tables, the authors present the results as changes in “log-odds,” in this case about 2.5. As the authors do when discussing their results in the text of the paper, I have exponentiated the values and presented them as multiplicative effects to ease interpretation.