The share of immigrants in the U.S. population is near a historic high. About one-in-seven people (14%) in the U.S. today, or 45 million, are foreign born. While many studies have highlighted the cultural diversity of immigrants, fewer point to the strength of immigrant families. As a group, immigrant families tend to be more stable than families of native-born Americans. Specifically, 72% of immigrants with children are still in their first marriage, whereas the share among native-born Americans is just 60%, according to a new Institute of Family Studies (IFS) analysis of census data.

Behind these numbers are the relatively higher marriage rates and lower divorce rates of immigrants in general. For every 1,000 unmarried immigrants ages 18 to 64 in 2019, 59 got married. The corresponding number for native-born Americans was 39. Likewise, only 13 out of 1000 married immigrants ages 18-64 got a divorce in 2019, compared with 20 out of 1000 among native-born Americans of same age. 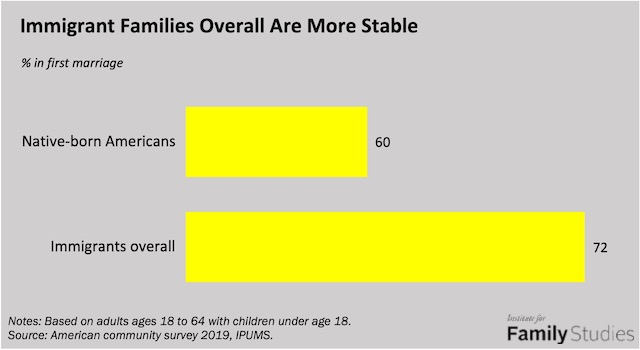 Family stability is also higher among immigrants from other parts of Asia, such as Bangladesh, Pakistan, Taiwan, Korea, China, and Japan. More than 80% of immigrant families from these countries comprise two stably married adults with their children.

Meanwhile, immigrants from the Middle East (e.g., Iran) and those from South America, such as Brazil and Venezuela, also enjoy a relatively higher level of family stability. So, too, do immigrants from Nigeria: 71% of Nigerian immigrants with children are married and in their first marriage.

On the other hand, the share of intact families is relatively lower among immigrants from Mexico (68%), the largest immigrant group. Immigrants from the Caribbean countries, such as Jamaica, Cuba and the Dominican Republic, also tend to have lower family stability—just about half of these immigrants with children are stably married (see Appendix Table 2 for more info). 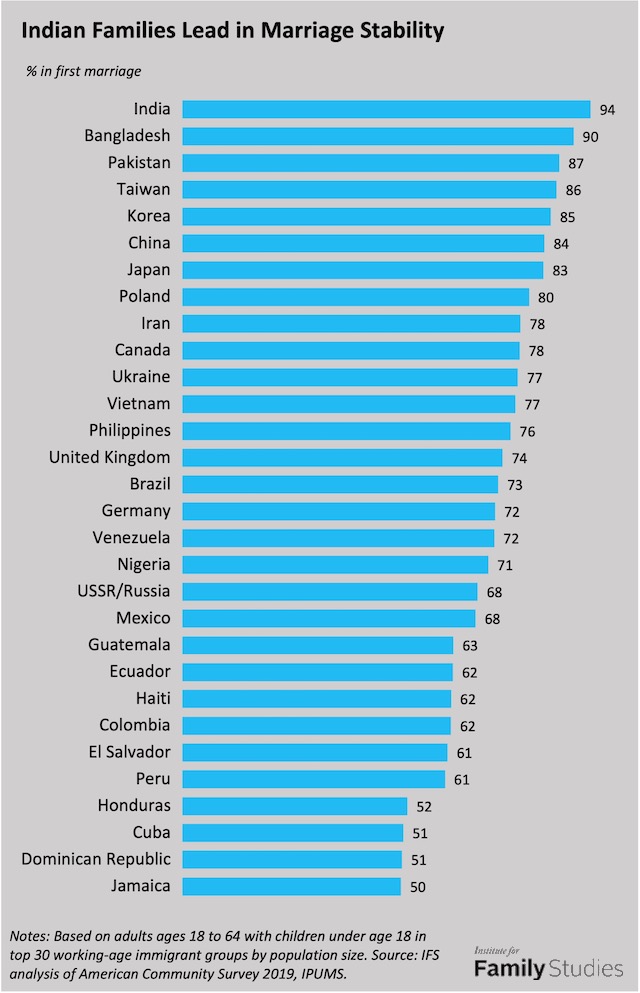 This is also true when comparing first-generation immigrants and those who were born in the U.S. For instance, Hispanic immigrants are less educated than native-born Hispanics and their household income is lower, yet they are more likely than native-born Hispanics to be stably married (64% vs.53%). A similar pattern applies to Asian immigrants. Native-born Asian Americans with children are less likely to be in a stable marriage than first-generation Asian immigrants (78% vs. 85%), even though their income is higher.

Obviously, education and income alone cannot explain this family advantage of first-generation immigrants. So what is it that makes immigrants stand out? In a word: culture.

The individualism in American culture has its virtues but is at odds with stable marriage and families. As we know, marriage is not only about personal happiness and fulfillment but also family solidarity. In the same IFS California survey, we found that couples who said they believe that “marriage is mostly about an intense emotional/romantic connection between two adults” are at a higher risk of divorce than those who believe that marriage is about romance but also “the kids, money, and raising a family together.” Moreover, married adults with a romantic view of marriage are less satisfied with their relationships: 74% say that they are satisfied with their relationship with their spouse, compared with 81% of those who believe marriage is about family.

The familism that immigrants embrace not only provides them a safe harbor when facing the challenges as newcomers, it also helps to provide a better environment for their children to advance in life. According to a recent analysis by IFS senior fellow Nicholas Zill, children of immigrants are doing surprisingly well in school: they are more likely to get “As” and are less likely to have behavior problems. The reason for their academic success is not because these children are from better-off families (in fact, the majority of them are not), it is partly because they are more likely to live in intact families with two married parents.

America is a country of immigrants. Many waves of immigrants have built up this great country in the past 200 plus years. While they represent a diverse array of cultures and traditions, what many new immigrants have in common is a dedication to family that translates into better performance in school and a stronger shot at realizing the American Dream.

1. See a list of 30 largest working-age immigrant groups in Appendix Table 1 below. 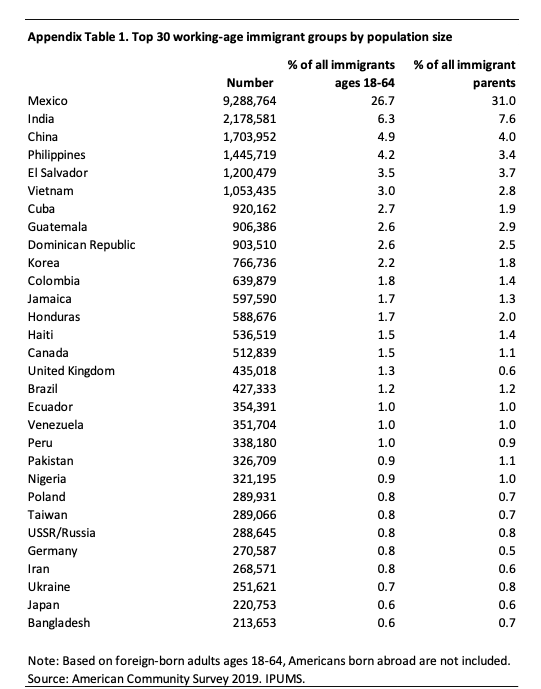 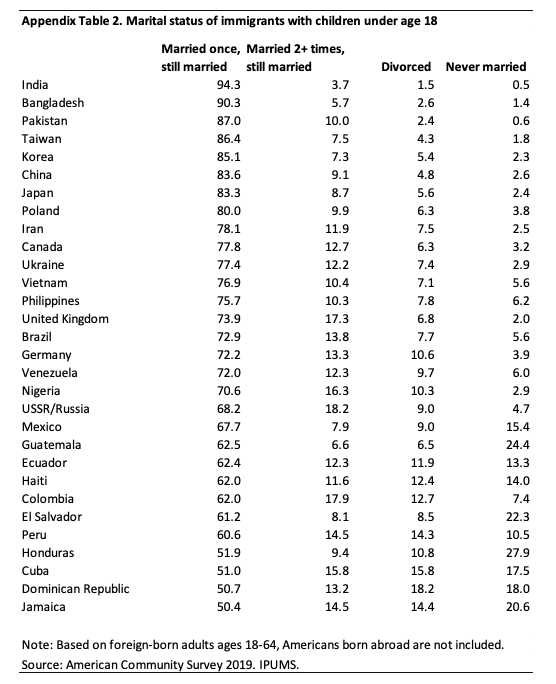