How Your Marital Status Affects Your Taxes

Preparing for Tax Day, which was yesterday, brings up a lot of questions in any household: Where did I leave my W-2? Should we itemize our deductions? Why didn't we hire someone to take care of this, anyway?

Presumably fewer people contemplate a more personal question: What if I were married? (Or single?) Yet marital status can have a major impact on the taxes you pay, as the New York Times blog The Upshot illustrated yesterday using data from the Center on Budget and Policy Priorities and the Tax Foundation. Whether being married means higher or lower taxes depends on your household's total earnings, how the earnings are split between partners, and how many kids you have, as the two below charts show. 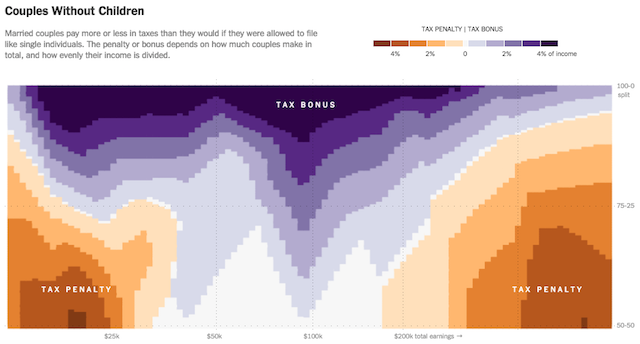 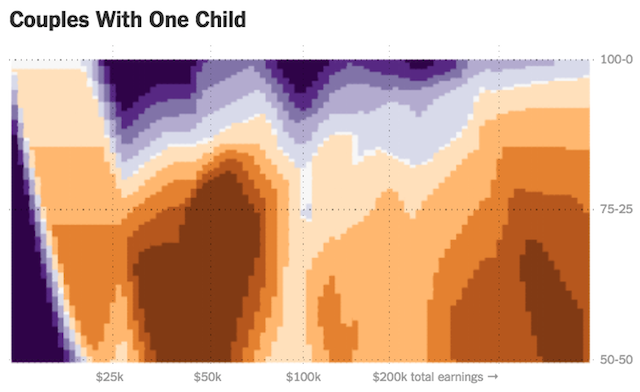 Single-earner married couples and dual-earner ones with very unequal incomes tend to benefit from being married, while dual-earner couples with comparable incomes can pay a penalty of more than 7 percent of their income. Is that fair? It depends on what you want to prioritize. Upshot's Amanda Cox explains:

When countries design their tax systems, they have to make some choices. Here are three possible goals:

It’s not possible to achieve all three goals at the same time. Most wealthy countries give up on the second goal, favoring couples with two earners over couples with only one. The United States gives up on the third.

Few people will pity the dual-earner couples earning more than $100,000 and paying a penalty for being married. But at a time when lower-earning couples are struggling to get by and less likely than ever to be reaping the benefits of marriage for themselves and their children, more should be done to ensure that the tax and welfare system doesn't punish them for tying the knot.

The Bourgeois Equality of a Universal Child Allowance

A 'Working-Class Party'? Child Tax Credit Debate Is a Test For the GOP