How to Revive the American Dream In Blue-Collar America

by W. Bradford Wilcox, @BradWilcoxIFS Robert I. Lerman, @boblerman
Back to Blog

When it comes to marriage, the nation is increasingly divided. Among college-educated Americans the news about marriage is surprisingly good: divorce is down, nonmarital childbearing is rare, and the vast majority of children are raised in stable, married homes. But for Americans without college degrees, the news is sobering: divorce is high, nonmarital childbearing has never been higher, and about half of children will see their parents' marriage or relationship break down and spend a portion of their lives in a home headed by a single parent.

This growing marriage divide poses obvious problems for children being raised outside of an intact family in poor and working-class communities. It's now well known that children raised in an unstable or single-parent family are much less likely to acquire the human capital, and to avoid detours like a teenage pregnancy or a spell in prison, they need to flourish in today's increasingly competitive marketplace. A recent Brookings study found that 67 percent of adolescents with mothers married throughout their childhood managed to graduate from high school with a GPA of at least 2.5, no criminal record, and no baby as a teen, compared to 42 percent of those whose mothers divorced and just 28 percent of those whose mothers never married. Thus, one big reason that children from poor and working-class homes have more difficulty realizing the American Dream today is that they are much less likely to have had the benefit of being raised in a stable home with two parents devoting time, attention, and money to their future. 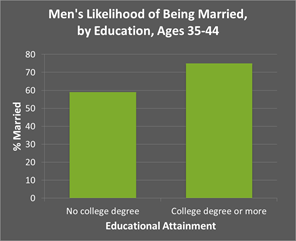 But another, largely unheralded problem with the marriage divide is that it has left millions of men in poor and working-class communities disconnected from the routines, responsibilities, and rewards of ordinary family life. The marriage divide means that only 59 percent of 35-44-year-old men without college degrees are married, compared to 75 percent of men with college degrees, according to the 2013 Current Population Survey. That's important because, as Nobel Laureate George Akerlof has observed, marriage tends to make men work harder, more strategically, and make more money.