How Some Couples Weather Financial Storms

by Jeffrey Dew
Back to Blog

During the Great Recession, millions of Americans lost their homes to foreclosure, and millions more lost their jobs. The resulting economic turmoil put a strain on many marriages.1 That the recession took a toll on relationships is not surprising; multiple social science studies have demonstrated a link between financial stress and marital difficulties.2 Whether or not the recent stock market upheaval signals the beginning of a wider economic crisis, most married couples will face some type of financial strain at some point in their marriage. Consequently, identifying how couples can prepare to face financial challenges while retaining a high-quality marriage is important.

For this reason, Mark Jackson and I recently examined3 whether financial preparation, pro-marriage attitudes, and positive marital behaviors would help spouses maintain their marital quality amid financial strain. We used data from a national sample of married couples who were randomly selected to participate in the study. We asked them how much they worried about meeting their financial needs every month, and to assess their financial preparation, we also asked them about their savings and their consumer debt (e.g., credit card debt). We measured pro-marriage attitudes by asking participants about the commitment they felt toward their spouse and marriage. Participants’ reports of how often they showed respect, affection, and forgiveness toward their spouse, as well as how often they engaged in small acts of kindness toward their spouse, formed our measure of positive marital behaviors. Finally, we asked couples how happy they were in different dimensions of their marriage, and how likely they felt that their marriage was to end in divorce.

Having a rainy day fund in place and having lower levels of consumer debt helped somewhat—couples with more savings and less debt were less likely to experience financial stress, for example—but they didn’t protect the marriages of those who reported financial strain. That is, couples who felt financially strained but who had more savings and/or less debt did not report happier or more stable marriages than financially strained participants who were highly indebted or lacked savings.

By way of contrast, commitment to one’s spouse protected marriages during financial strain, when it was the husbands who were committed. Husbands with high commitment to their marriage reported low levels of divorce likelihood regardless of their level of financial stress, as Figure 1 illustrates. Even at the highest levels of financial stress, highly committed husbands reported the same level of divorce likelihood as highly committed husbands with low economic stress. 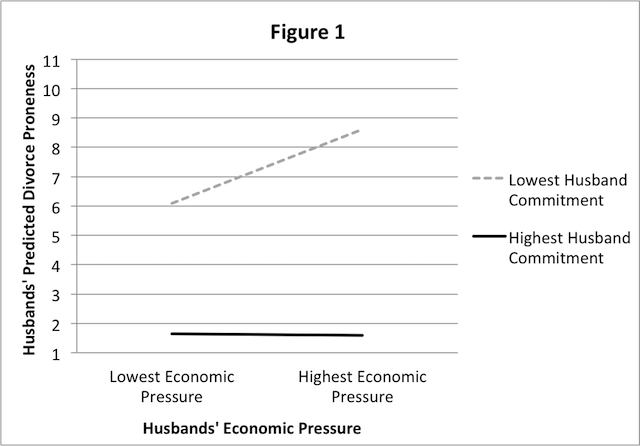 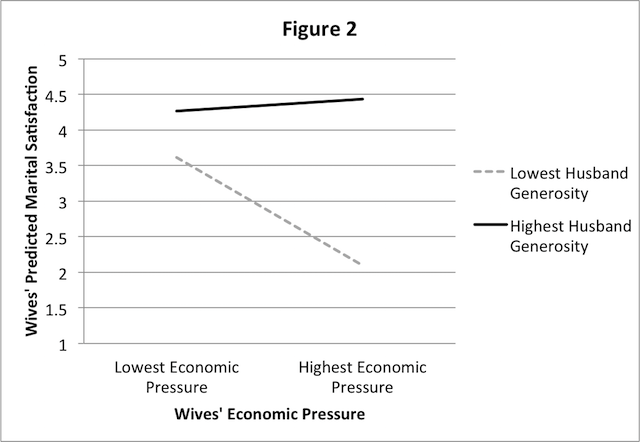 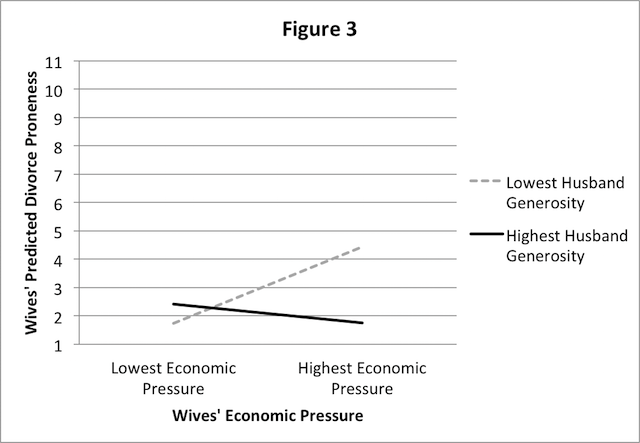 Why might the commitment and positive relationship behaviors of only husbands, rather than wives, be especially protective during financial strain? It may be because men typically exhibit lower commitment and positive relationship behaviors than women.4 In other words, because it is not as normative for men to exhibit these traits, when men do exhibit them, their wives take notice and feel more satisfied with their marriage. These behaviors and responses may then play a protective role during financial stress. This is only speculation, however. This finding needs additional research before we can definitively know the reason for the gender differences.

In summary, although sound financial management might help couples perceive less financial strain, if couples are actively in the middle of financial difficulties it is preparation in the realm of marriage that matters most for their relationship. The actions of both spouses affect a couple’s marital quality, but when finances are poor, husbands’ commitment and positive relationship behaviors seem particularly important to weathering the storm.

Jeffrey Dew is an Associate Professor at Utah State University. He studies the association between families’ resources and their relationship quality.