How Our Education System Fails Most Students

by Oren Cass, @oren_cass
Back to Blog

Watching students move through it, America’s education system can seem to be functioning passably well. Most students complete high school on time. Most high school graduates go on to college. Most college enrollees will complete a degree. Most college graduates find their degrees useful in the labor market.

But gazing back along the pipeline’s length yields a starkly different, distressing picture. The share of students falling by the wayside accumulates higher at each juncture. As I show in a new report published by the Manhattan Institute, How the Other Half Learns, fewer than one-in-five manage to smoothly travel the high school-to-college-to-career pipeline that we take to be the system’s goal. 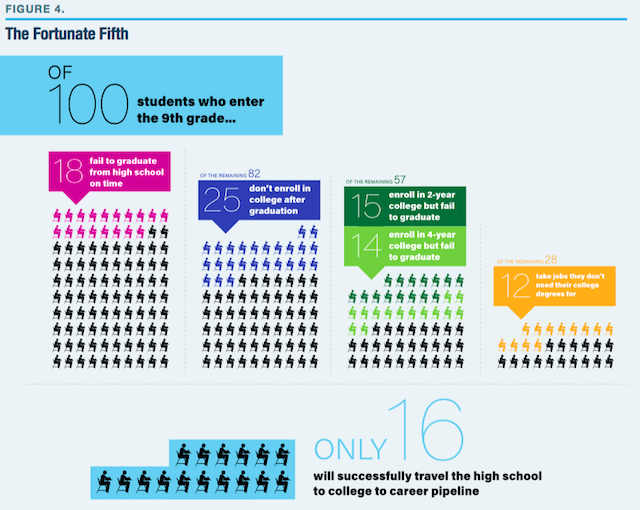 Nor, despite a generation of intensive reform efforts and spending increases, is the situation getting much better. In 1970, 79% of public school students were graduating from high school within four years. In 2010, that figure was 78%. The past several years have seen increases in the rate, but also troubling evidence that those increases are driven by declining standards, data manipulation, and outright fraud. Standardized test scores have not improved since the 1970s, and SAT scores have declined.

High school graduates enroll in college at higher rates than they used to, but that has not translated to a surge in college graduates. The vast majority of community college enrollees drop out. Four-year schools perform better, but still fewer than 60% of students complete degrees within even six years at the schools where they first enroll. As Harvard University’s David Deming observed in a 2017 report for the Brooking Institution’s Hamilton Project, “Although college attendance rates have risen steadily, bachelor’s degree attainment by age 25 has been relatively flat for the past two decades.”

Finally, even for college completers, the Federal Reserve Bank of New York reports a consistent trend of labor market frustration going back decades. Every month since 1990, between 37 and 47% of recent graduates report working in jobs that do not require a college degree.

At some point, we have to stop faulting the system for its failure to produce more graduates, and stop expecting the next policy intervention or funding increase to solve the “problem.” The reality is that most students are not going to complete the college pathway as we have defined it, and the actual problem we need to solve is that the education system provides few attractive pathways for the non-college student to travel.

High schools oriented entirely toward college preparation, for instance, fail to engage students lacking the aptitude or interest to pursue that course. Those who continue through graduation find themselves ill-equipped to enter and succeed in the labor market, or in life in general. They watch society lavish resources on their peers headed for college but find no support available to them. The largest segment of the population—those who start college but don’t finish—are perhaps the worst served of all. They have little to show for their efforts except for lost years and enormous debts. An attitude of college-or-bust is producing too few college graduates and too many busts.

If college were truly the necessary and sufficient “ticket to the middle class,” then perhaps we might justify a system that pushes as hard as possible in that direction, even at the expense of those who fall short. But the reality of our labor market is quite different. Yes, the most successful college graduates are the economy’s top earners. But the bottom half of the earnings distribution for college grads—not just enrollees, but graduates—sits lower than the top half of the earnings distribution for those with only a high school education. And that’s before we even invest in helping to set that high school graduate on a successful path.

Good vocational programs exist in the United States that use the teenage years to prepare students for productive work and then launch them into careers after high school graduation. In other developed economies, such programs are the norm. But here, they are few and far between, underfunded and deprioritized, and too many Americans consider such pathways to be only “for other people’s kids.” Those kids are most people’s kids, including some of your kids, and it is long past time to design our education system for serving them too.

Oren Cass is a senior fellow at the Manhattan Institute and author of the forthcoming book, The Once and Future Worker (Encounter Books, November 2018).