How Many Families Would Be Left Out by Obama’s Tax Plan?

President Obama took flack from me and others last week for floating a middle-class tax plan that left families with a stay-at-home parent out of the picture. His plan—which would offer dual-earner families with an income of less than $120,000 up to $3,000 per child in a childcare tax credit and a $500 credit for having a second earner—was designed to offset the costs associated with having a second worker in the labor force. But in targeting dual-earner couples, the president offered nothing to middle-class families with a stay-at-home parent. How many families are we talking about? 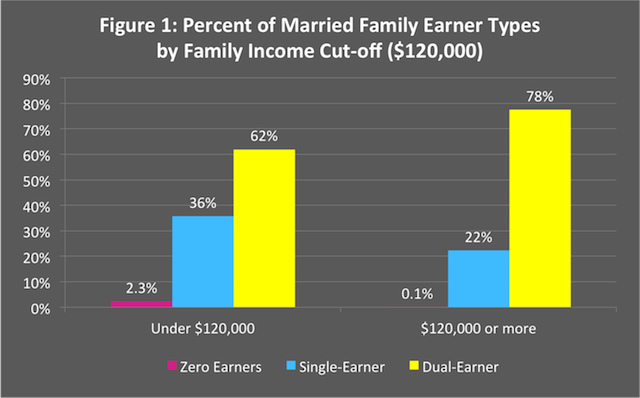 Source: American Community Survey. Notes: This data includes all married couples with at least one child under age 18 in the household using the ACS. (Married teen-parent subfamilies, of whom there were nine, were dropped from the sample.) Family income is the sum of wage/salary incomes of the household head and his or her spouse.

What gives here? Why did the president overlook or deliberately exclude families with stay-at-home parents—usually moms? The White House plan was designed both to make it easier for double-earner families to make ends meet and to draw more women into the labor force. The former concern is especially important, since a fair number of mothers would like to be in the labor force but cannot afford to work given the costs of quality childcare. This is particularly an issue for lower-income families who often would have to spend more on childcare, commuting costs, and other work-related expenses than a second earner would get in wages. So mom often stays home in these situations, as economists Melissa Kearney and Lesley Turner have noted. This is one reason why stay-at-home parents are much more common among lower-income married families (see figure below). 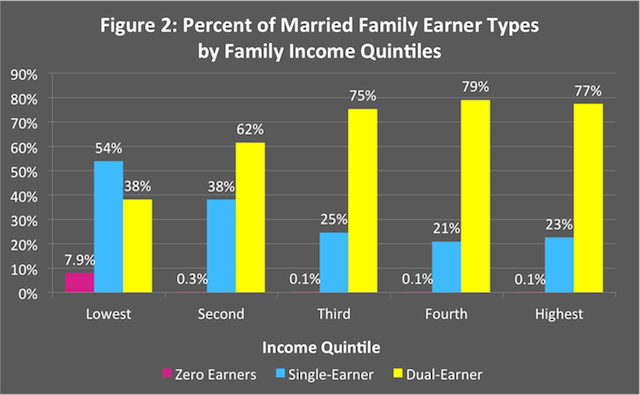 Source: American Community Survey. Notes: This data includes all married couples with at least one child under age 18 in the household using the ACS. (Married teen-parent subfamilies, of whom there were nine, were dropped from the sample.) Family income is the sum of wage/salary incomes of the household head and his or her spouse.

So, is the solution to just support families with two earners in the labor force, or those who would like to have both parents in the labor force but feel like they cannot afford to do so? No. The problem with Obama’s plan is that it overlooks not only families who currently have a stay-at-home parent and would like to keep it that way but also the substantial share of dual-earner families who would like to have a parent at home but feel they cannot afford to do so. In addition, it discounts the important caregiving, domestic work, and civic contributions that these stay-at-home parents make, benefitting the economy as well as the commonweal. The Obama plan would be particularly unfair to parents who are staying home to give children with physical or emotional problems the extra parental care they need. 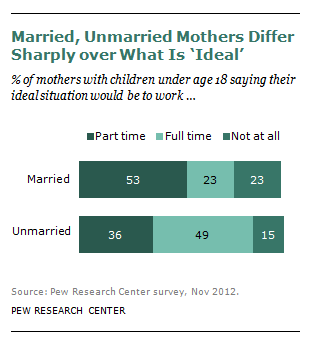 Today, we live in a world where no one model of work and family captures the hearts and minds of married men and women trying to do right by their families. Some couples want dad at home, some want mom at home, and some want both parents in the labor force. The most popular work-family ideal for married mothers is somewhere between the extremes of working full-time and staying home: it is working work part-time, as a recent survey from the Pew Research Center indicates. (Working full-time and being at home full-time are the next most popular options for married mothers.)

If the president wishes to deliver tax relief that honors the ideals of all lower- and middle-income couples struggling to raise families today, there are some better policy options out there—from Senators Lee and Rubio's tax reform plan to Robert VerBruggen’s proposal for a refundable child tax credit, which would “ease some of the financial hardships of parenthood without putting a thumb on the scale for parents facing hard choices about work and child care.” Let’s hope that President Obama and the Republican Congress can find common ground in 2015 to deliver middle-class tax relief that honors the work-and-family choices of all families.

W. Bradford Wilcox is a senior fellow at the Institute for Family Studies and a visiting scholar at the American Enterprise Institute.