How Ideology and Religion Relate to Marriage

Editor's Note: The following article is excerpted from the new IFS research brief by Wendy Wang, "More Than One-Third of Prime-Age Americans Have Never Married."

Culture and belief also play a role in family formation in America. For example, Americans who hold conservative views are more likely than liberals to support marriage and less likely to be single.

Despite the fact that Americans of all ideologies have experienced a drop in marriage rates, the marriage gap between conservatives and liberals has actually become somewhat larger since the 1970s. In 2018, 36% of liberals had never been married, which is 11 percentage points higher than the share among conservatives (25%). In 1974, the gap between the two groups was 5 percentage points, according to an IFS analysis of the General Social Survey. 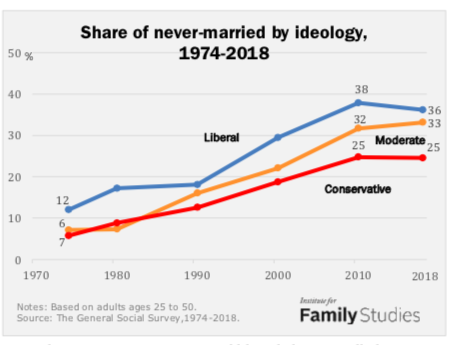 Meanwhile, Americans who regularly attend church or religious services are less likely than those who are secular or occasional churchgoers to have never married. According to the General Social Survey, one-quarter of frequent church goers ages 25 to 50 are single today, compared with 36% of secular Americans, and 34% of those who only occasionally attend religious services. This marriage gap by religious attendance was small in the 1970s and 80s but grew significantly in the 1990s and remain largely unchanged today. 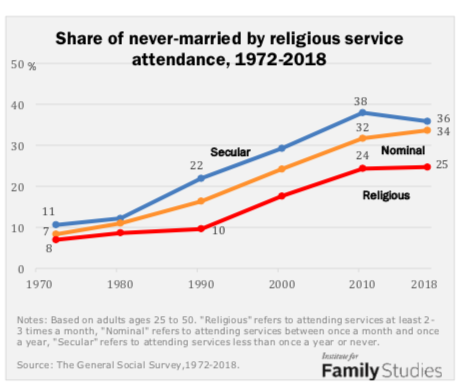 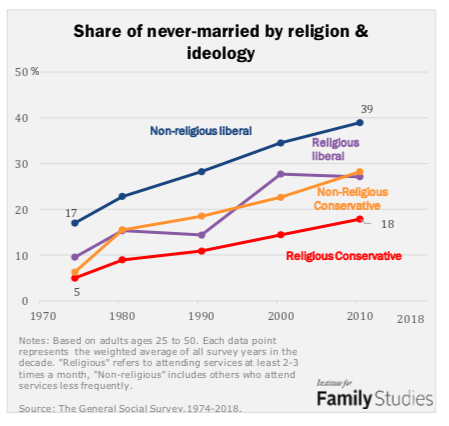