Among journalists who write about education, the stock explanation for student underachievement and school discipline problems is poverty. Yet there are examples in every school system of students from impoverished family circumstances who do well academically, as well as instances of students from affluent families who get D’s and F’s or wreak havoc in class. When poverty is overemphasized as a cause of instructional ills, other aspects of family life—such as conflict between parents or changes in student living arrangements due to divorce or remarriage—are typically ignored or underemphasized.

Indeed, it is not generally appreciated how much burden has been placed on our public schools by the revolutionary increases in divorce, cohabitation, and unmarried childbearing that took place over the last half century. We expect schools not only to cope with these changes, but also to solve any student achievement or behavior problems that might arise from dysfunctional family dynamics. And we expect them to do this without any power over the parents or guardians who care for the children most of the time.

To illustrate the importance of family transitions for student performance and behavior, and show that they are not reducible to differences in family resources, I analyzed data from a large longitudinal study of 19,000 kindergarten students that was conducted by the National Center for Education Statistics beginning in 1998.1 This study, known as the ECLS-K, followed more than 9,000 of the students through to the eighth grade. It collected information from parents, teachers, and school administrators, and directly assessed the achievement of children themselves. Because the study contains a rich array of data on family composition, family transitions, and characteristics of both resident and absent parents, it has served as the basis for several published papers on divorce and other family transitions and their relationship to student achievement and wellbeing.2 Most of these studies have not included data from the final, eighth-grade wave of the ECLS-K, which the present analysis does.

During kindergarten, the three groups of children were similar in terms of the economic and educational resources of their parents.6 Their financial circumstances diverged following parental divorce, and then changed again for those whose divorced parents remarried. By the time they were in the eighth grade, children in the Divorced Single Parent group had significantly lower family incomes than those in the other two groups, and a larger minority of them were living below the official poverty level. Children in the Remarried Parent group had family incomes that were higher than in the Single Parent group, and not significantly different from the Parents Stay Married group.7

During kindergarten, the three groups of children were similar with respect to their conduct in school. According to their teachers, they exhibited an above-average approach to learning tasks, paying attention well, showing eagerness to learn, and persisting in the face of challenges. Children in all three groups were less likely than the average child to be argumentative or to get into fights with other students. They were also less apt than average to appear unhappy or worried, or to withdraw from group activities. The three groups did not differ significantly from one another on these positive or negative aspects of classroom behavior.

Differences in classroom behavior emerged as the children experienced family transitions. By the time they were in fifth grade, students in the Divorced Single Parent and Remarried Parent groups exhibited less positive approaches to learning tasks than students whose parents stayed married. The Single Parent children were now at the 44th percentile in teacher behavior ratings, while the Remarried Parent students scored at the 43rd percentile. As Figure 1 shows, both were significantly lower than the Stay Married group, which remained above average at the 55th percentile. The comparisons are statistically adjusted for differences across groups in student age and gender, family income and poverty status, parent education level, and racial and ethnic composition. 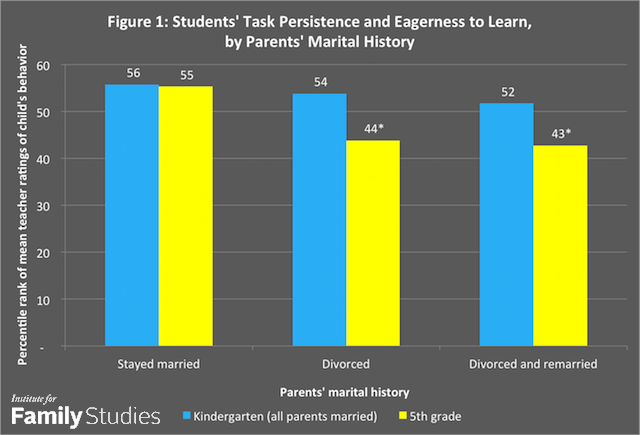 The fifth-graders from the divorced groups also showed more sad, worried, and withdrawn behavior in class than did students whose parents remained married. Figure 2 indicates that children in the Single Parent group scored at the 54th percentile in teacher ratings of these kinds of emotional distress, while children in the Remarried Parent group were at the 61st percentile. Both groups showed significantly more negative feelings than students in the Stay Married group, who were at the 47th percentile. (In this case, higher percentile ranks indicate more troubled behavior, with the 50th percentile being average across all students, including those whose parents were not married while the child was in kindergarten.) These comparisons are also adjusted for demographic and socioeconomic disparities across groups. 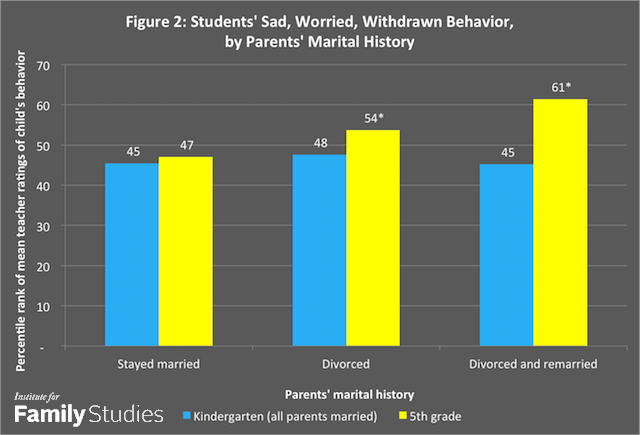 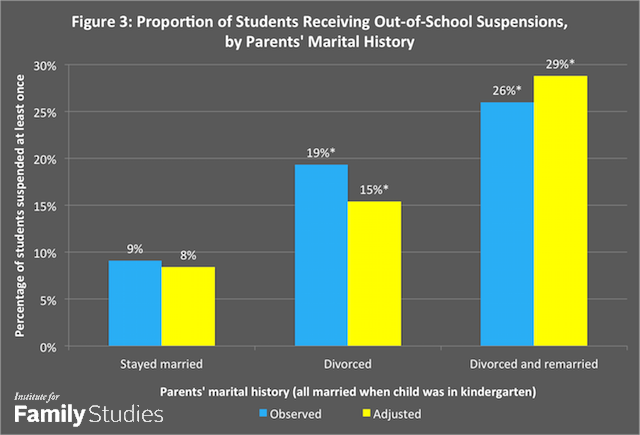 Compared to teenagers in the Parents Stay Married group, adolescents in the Remarried and Single Parent groups were more apt to seem unhappy and be bothered by fears and worries, according to their parents. Teens in the Remarried group scored at the 61st percentile on these symptoms of anxiety and depression, whereas teens in the Single Parent group scored at the 54th percentile. (Higher percentile scores indicate more negative symptoms. The 50th percentile is average.) Teens in the Stay Married group, at the 43rd percentile, were less troubled than average, as the left side of Figure 4 illustrates. These comparisons are adjusted for the same socioeconomic and demographic factors listed above. 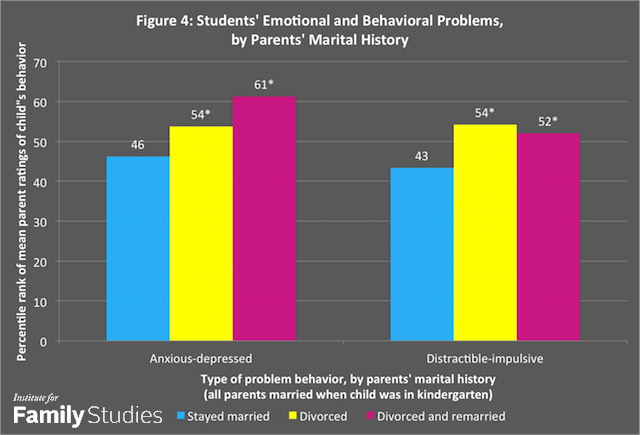 Is a Stable Single-Parent Family Better for Children?

In sum, both children in stable single-parent families and those in stable stepfamilies evidenced more emotional, behavior, and learning problems following the divorce, or the divorce and remarriage, of their parents. They did not evidence such problems in kindergarten, prior to the divorce. The single-parent families clearly experienced a decline in their financial circumstances following divorce. Yet this decline did not prevent children from getting good grades in eighth grade, comparable to those of students from stable married-parent families. On the other hand, the teens from single-parent families showed more symptoms of anxiety and depression at home, as well as more distractible and impulsive behavior. They were twice as likely to have been suspended from school as teens whose parents stayed married. Their problem behavior levels remained elevated after statistical controls for family income and poverty.

The teens in remarried families were better off financially than those in single-parent families, and their family resources were comparable to those of teens in stably married families. Yet they had worse grades and were three times as likely to have been suspended as the students whose parents stayed married. They also showed more symptoms of anxiety and depression at home, and more distractible and impulsive behavior. Of course, these children had experienced two major upheavals between kindergarten and eighth grade: the divorce of their birth parents and the remarriage of the birth parent with whom they were living. The children in the single-parent group went through only one upheaval: divorce.

As previous studies have shown, the financial benefits that usually accompany remarriage after divorce, and the companionship and supervision that a stepparent can provide, do not immunize children against the negative psychological effects of the stress and divided loyalties that they suffer following the divorce of their birth parents.8 In fact, the new spouse’s attempts to assume a parental role and his or her claims on the biological parent’s affection may actually exacerbate the internal conflicts that children experience.

On the face of it, the findings suggest that remaining in a stable single-parent family during the elementary-school years is better for adolescent behavior and achievement than having the custodial birth parent remarry. However, the apparent behavioral differences between the single-parent and remarried groups were not statistically reliable. The lack of statistical significance is probably due to the relatively small number of children in the single-parent and remarried-parent groups and the consequently large sizes of the standard errors around the group means. The emotional wellbeing and behavior of teens in both groups were reliably worse than those of adolescents whose parents remained married throughout their childhoods.

Family transitions like divorce and remarriage are complex processes. Not surprisingly, there is much scholarly debate about what causes what and which aspects of family life are most significant for the wellbeing of children and adults involved in these major life changes. Disentangling the complex causal web is beyond the limited scope of the present analysis. Several published papers have used sophisticated statistical methodology and the ECLS-K data to try to clarify causal questions.9 I urge the interested reader to examine them. What I hope is clear from the present analysis is that, even in relatively advantaged families, family disruption and reconstitution have effects on children that show up in school. And these effects are not simply attributable to poverty. Discussions about school discipline and educational policy would do well to recognize this reality.

Nicholas Zill is a psychologist and survey researcher who helped design the questionnaires and data collection and tabulation procedures used in the ECLS-K when he was a Vice President at the survey firm Westat.

4. There were 330 children in the Divorced Single Parent group, 288 of whom lived with their divorced mothers, while 42 lived with divorced fathers.