How Do the Children of Immigrant Parents Perform in School?

As of 2016, there were some 11.5 million elementary- and secondary-school students in the U.S. whose parents were born in a foreign country, such as Mexico, China, India, the Philippines, or El Salvador. They represented 22% of the total student population.1 According to notions about educational success that are prevalent among sociologists, education researchers, and journalists, these students should be struggling in school. The predominant view is that academic success is tied to a student’s family income and wealth, social class, ability to go to schools with good teachers and abundant resources, and “white privilege.”

From this perspective, immigrant children have a lot going against them. The average family income of immigrant students is well below that of students whose parents were born in the U.S.2 The educational attainment of their parents is also lower, on average, than those of native-born parents. Only a small portion are white; most are Hispanic or Asian. Many come from homes where a language other than English is spoken. They are likely to live in big cities like New York, Los Angeles, and Miami, or in large suburbs, and many live in neighborhoods that have relatively high concentrations of childhood poverty. Furthermore, their parents are less involved in school activities like parent-teacher conferences or fundraising drives.

Yet most children of immigrant parents are doing well in school. They are just as likely to be getting good grades as children of native-born parents. They are better behaved in class and more likely to enjoy school. They are less apt to have been diagnosed with a learning disability or emotional disorder. And their parents are as satisfied with the schools their children attend as non-immigrant mothers and fathers.

Parental Satisfaction. In 2016, 83% of immigrant students were enrolled in public schools, as were 84% of native students. The proportion enrolled in charter schools was twice as large among students of immigrant parents as among those with native parents: 12% versus 6%. On the other hand, the proportion enrolled in private schools was only about half as large: 6% versus 10%. Sixty-four percent of immigrant parents were very satisfied with the schools their children attended, not significantly different from the 61% of native parents who were similarly satisfied.

Student Grades. As shown in Figure 1, the proportion of students earning “mostly A” grades was 51% among students with immigrant parents and 48% among those with native-born parents.3 The proportion of parents contacted by their child’s school, due to a learning problem the child was having, was 16% in the immigrant group. This was significantly less than the 22% of U.S.-born parents who had been similarly contacted. The proportion of students diagnosed with a psychological or physical disability was 14% in the immigrant parent group, significantly less than 24% so diagnosed in the native-born parent group. 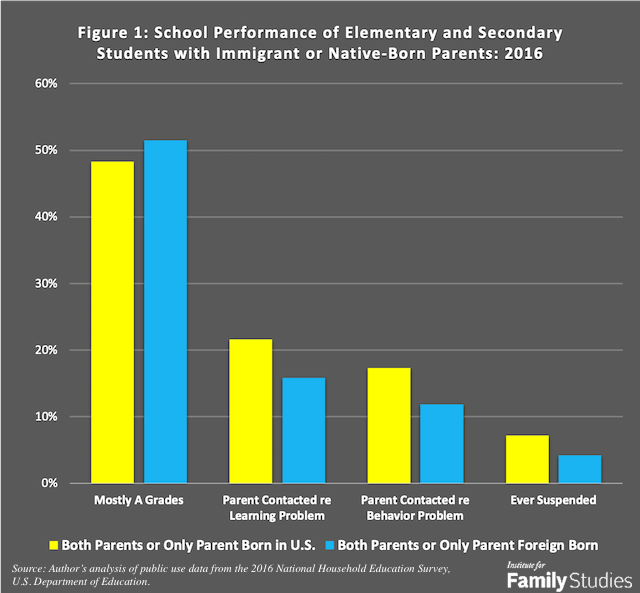 Behavior. The proportion of foreign-born parents who strongly agreed that their child enjoyed school was 95%. This was significantly greater than the 91% of native parents who said the same thing. The proportion of parents contacted by their child’s school, due to a conduct or disciplinary problem the child was creating, was 12% in the immigrant group. This was significantly lower than the 17% of U.S.-born parents who had been similarly contacted. The proportion of students who had ever been suspended or expelled from school was only about half as large in the immigrant group as in the native group: 4% versus 7%.

Family Structure and Parental Employment. What might account for the surprisingly good academic performance of immigrant students? How are they able to overcome the odds supposedly stacked against them? Part of the answer may lie in the fact that a substantial majority live in intact families with both married birth parents present in the home. And those parents are more likely than native parents to adhere to a “breadwinner-homemaker” division of labor.

Nearly two-thirds of students of immigrant parents lived with their married birth parents, whereas the same was true of little over half of students of U.S.-born parents. Smaller portions of immigrant students lived in stepfamilies (6% versus 11%) or with never-married mothers (4% versus 7%). Similar proportions lived with separated or divorced mothers (15% versus 13%) or with their biological fathers only (5% versus 4%).

Fewer students with immigrant parents were in families where both parents worked all year (37%), whereas the same was true of nearly half (49%) of students with native-born parents. Immigrant families were also less likely to have both father and mother working full-time throughout the year (19% versus 27%) and more likely to have one parent working full-time, while the other was a homemaker (24% versus 15.5%).

Students of immigrant parents who lived with both married parents were doing better in school than those who lived with single parents, in stepfamilies, or in other family situations. As shown in Figure 2, those in intact families were more likely to get mostly A grades and less likely to have their parents contacted because of their learning problems or misbehavior. Students in intact families were only about half as likely to have been diagnosed with a psychological or physical disability.4 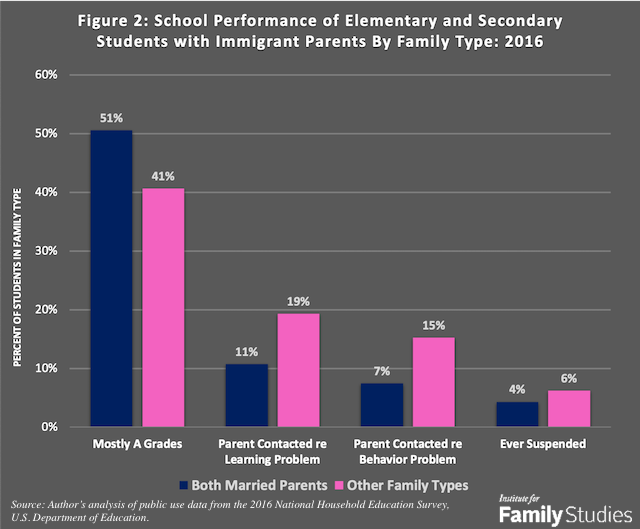 Expectations of Immigrant Parents. Another factor that contributes to the success of students with immigrant parents is that their mothers and fathers have extremely high expectations about how far their offspring will go in school. Most came to this country because they believed there were better opportunities here than in their countries of origin. They are motivated to take advantage of those opportunities through hard work and enterprise, and to have their children do so as well.

Ninety-one percent of immigrant parents expected their children to get a college degree, which was significantly higher than the 72% of native parents who expected the same. A 57-percent majority of the immigrant parents expected their children to get graduate or professional degrees, whereas a 36%-minority of native parents had similar expectations. Students with immigrant parents who expected them to get graduate or professional degrees were more likely to get A’s in school than those whose parents had lower expectations (57% versus 34%). This was the case even after adjusting for the parents’ education level and family income, the student’s grade level and sex, and whether the student lived with two married birth parents.

Performance Varies, But the Overall News is Good

There is, to be sure, variation within the immigrant community in student performance and adjustment, variation that relates to factors like the parents’ education and family income levels and the racial and ethnic origins of the family. In turn, those factors relate to educational opportunities in their countries of origin, the reasons why they came to the U.S., and the criteria by which they were admitted to this country.

Asian and other immigrants who came here because they qualified for high tech jobs are more likely to have college educations and high incomes than Hispanic and other immigrants who came seeking work in agriculture, construction, or service industries. Children of the former group are more likely to be earning A’s than children in the latter group. But parents in both groups have high expectations of their children and are reasonably satisfied with the schools they are attending. The children in both groups are also happy with their schools and less likely than children of native-born parents to be posing instructional challenges or behavior problems for their teachers. At a time when most commentary about public education focuses on deficiencies and failures, this seems like good news that is worth being known more broadly.

1. The estimates in this research brief are based on my analysis of data from the 2016 National Household Education Survey (NHES) conducted by the Census Bureau for the U.S. Department of Education. The estimated population numbers and percentages are for students, both of whose parents were born abroad, or, if there was a single parent in the household, that parent was born in another country. There were an additional 4.3 million children living with two parents, one of whom who was born abroad while the other was born in the U.S. The latter represented an additional 8 percent of the total student population.

3. Estimates adjusted by means of multiple logistic regression analysis for differences across groups in family structure, parent education and family income levels, and student sex, grade level, and race and ethnicity. Estimates for students with one foreign-born and one native-born parent are shown in Tables 1 and 2 (below), but not discussed in the text.

4. All of these estimates are adjusted by means of multiple logistic analysis for disparities between family types in parent education and income levels, and student sex, grade level, and race and Hispanic origin. 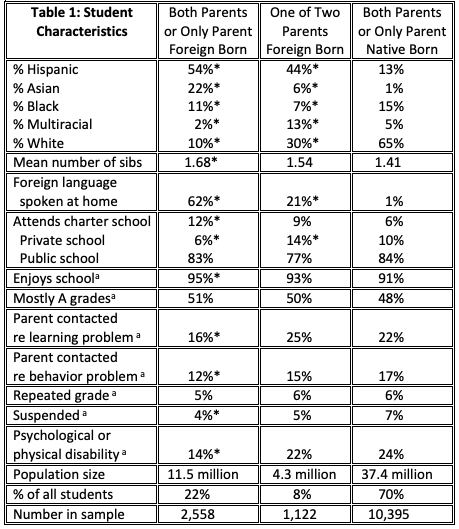 Notes: Demographic characteristics and school performance indicators
of elementary and secondary school students living with foreign-born vs.
native-born parents: U.S., 2016. Source: Author’s analysis of public use
data from the 2016 National Household Education Survey, U.S. Department
of Education. Legend: * Estimate is significantly different from that
for students with both native-born parents. a Estimate adjusted for
demographic and socioeconomic differences across migration groups. 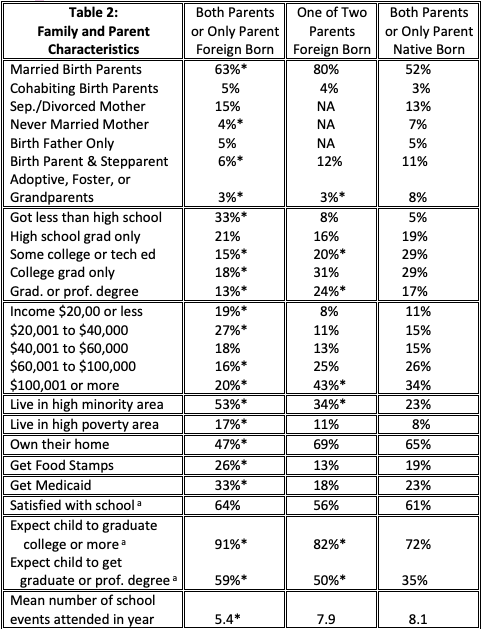 Notes: Family characteristics of elementary and secondary school students
living with foreign-born vs. native-born parents: U.S., 2016. Source: Author’s
analysis of public use data from the 2016 National Household Education Survey,
National Center for Health Statistics, U.S. Department of Education. Legend:
* Estimate is significantly different from that for students with both native-born
parents. a Estimate adjusted for demographic and socioeconomic differences
across migration groups.