Homeschooling—the practice of parents teaching their 5- to 17-year-old children at home rather than sending them to public or private schools, has seen a big increase due to the COVID-19 pandemic. Across the U.S., as the Census Bureau recently reported, the proportion of households with school-aged children practicing homeschooling doubled between the Spring and Fall of 2020, growing from 5.5% to 11.1 percent. The states of Massachusetts and New York both saw seven-fold increases in homeschooling, while Florida showed a near tripling, and Texas, a near doubling. On the other hand, the state of California, where homeschooling was already relatively common, saw no increase.

Prior to 2020, only about 3% of elementary and secondary school students in the U.S. were homeschooled. Although homeschooling rates went up gradually between 1999 and 2019, the jump during the pandemic year was unprecedented (note: remote learning, where the public or private school provides the instruction via the Internet, was not counted as homeschooling in the studies cited here).1 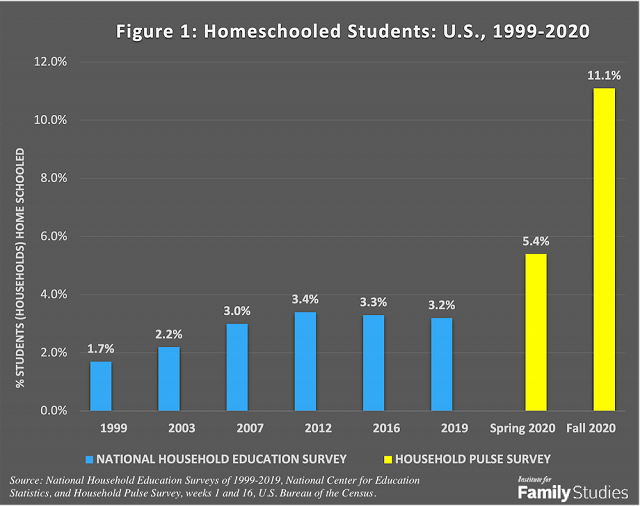 The increase in homeschooling is perhaps not surprising, what with more parents spending lots of time at home after being laid off or ordered to work remotely during the pandemic. Data from the 2019 National Household Education Survey show a strong relationship between parental employment arrangements and the likelihood of children being homeschooled. Families in which both parents—or a single parent—worked full-time, full-year were, understandably, very unlikely to practice homeschooling.2 The number of such families dropped precipitously thanks to COVID restrictions. In addition, many local school systems vacillated between suspending and resuming in-person classes and struggled to provide effective instruction via the Internet.3

What is surprising are large increases in homeschooling among Black, Hispanic, and Asian families, groups who were less likely to practice homeschooling prior to the pandemic. Before 2020, most homeschooled students were white (59%) and nonpoor (79%). As shown in Figure 2, there was a nearly four-fold increase in homeschooling among Black households with school-aged children. Their homeschooling rate in the Fall of 2020 (16%) was significantly higher than that of white (10%), Hispanic (12%), and Asian (9%) households. A possible explanation for this change is that many of the public schools that Black students attended were particularly ill-equipped to administer remote instruction. 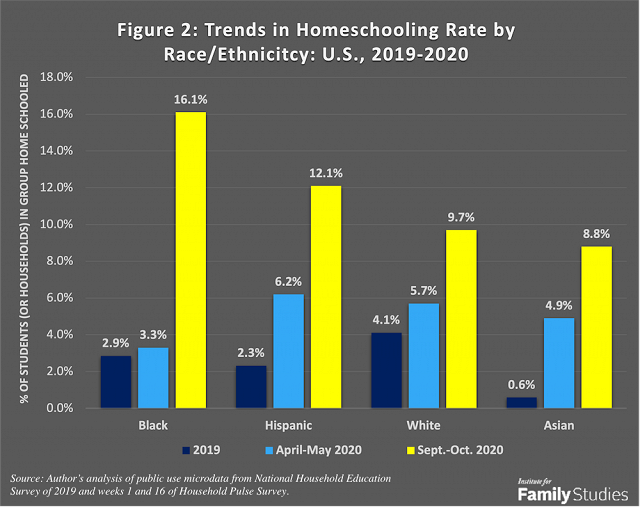 As schools reopen this coming Fall, it remains to be seen whether families that converted to homeschooling will return their children to the care of neighborhood institutions or continue to instruct them at home. The fact that many mothers with school-aged children have yet to return to the paid labor force suggests that homeschooling rates may stay elevated for a while at least, if not indefinitely.

At the height of the pandemic, newspapers were full of articles describing parents obliged to school their children at home being newly appreciative of the hard job that teachers do each day managing classrooms full of less-than-eager learners. But other parents reacted with irritation as schools bungled on-line instruction and could not decide whether or not to resume in-person instruction. Teachers unions also received criticism for putting the well-being of their members ahead of the instructional needs of children and the child care requirements of families. These negative perceptions may lead to a continued parental reluctance to return their children to traditional school-based instruction.

But what reasons did parents who homeschooled before the pandemic give for doing so? Looking at their rationales may provide insight as to whether homeschooling will continue to be more popular in the future. The leading reason given by homeschooling parents in 2019 was concern about the school environment: fears that their children might not be safe at school; worries over the availability of cigarettes, alcohol and drugs; and anxiety about negative peer pressures. As shown in Figure 3, this reason was cited by the parents of 75% of homeschooled students in 2019. Nearly a quarter chose it as the most important reason for homeschooling. This basis for keeping children at home remains salient for many parents. 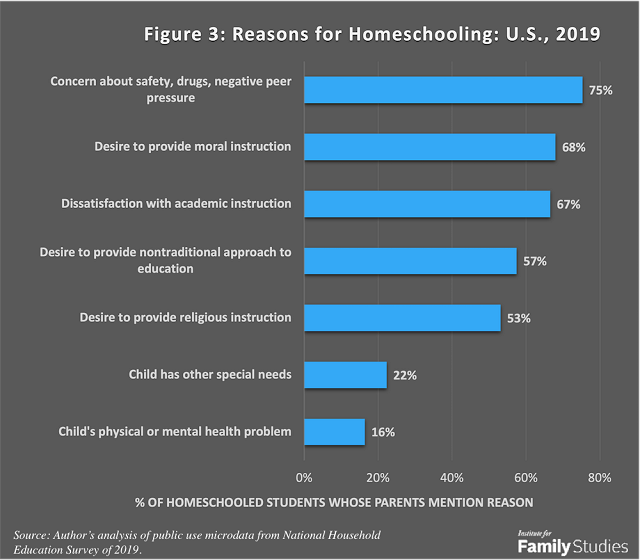 Another frequent rationale was dissatisfaction with the academic instruction at the locally available schools. Two-thirds of homeschooled students had parents who gave this explanation for their decision, and 13% chose it as the most important reason. This basis for home tutelage also remains salient. It may be becoming even more so, given the movement to adopt “anti-racist” instructional programs in urban public schools.

Even as the Biden Administration plans to shower torrents of additional money on the nation’s schools, education administrators would do well to consider why growing numbers of parents have chosen to forsake their services for better alternatives.

1. The observation that homeschooling increased dramatically in 2020 is based on data from the Census Bureau’s new and experimental Household Pulse Survey program, whereas earlier readings come from the Department of Education’s longstanding National Household Education Survey. Thus, the apparent increase may be at least partly due to differences in question wordings, respondent understandings, and other survey practices.

3. Remote learning, where the public or private school provides the instruction via the Internet, was not counted as homeschooling in the studies cited here.