by Charles E. Stokes
Back to Blog

Conservative Protestants are not only failing to live up to their own pro-family standards, now they are making it harder for everyone else to stay married, too. At least that’s the story likely to be reported based on findings in a new article, “Red States, Blue States, and Divorce: Understanding the Impact of Conservative Protestantism on Regional Variation in Divorce Rates,” published this week in the American Journal of Sociology.

Early-marrying couples face a double dilemma of learning to live together and  raise children together while also struggling to get by.

Glass and Levchak have carefully crafted an important study using some of the best available data, and their findings and conclusions should not be dismissed by conservative Protestants or their pro-family allies. But there is more to the story. Below I suggest a few additional considerations that are in order before rushing to declare conservative Protestants unwitting enemies of marriage.

First, there are a few things missing from the article that shouldn’t be ignored. What’s most surprisingly absent from an article purportedly about red states and blue states is any measurement of political affiliation. The units of analysis are counties and individuals, not states, and of all the county- and individual-level variables used in the study not a single one measures whether a county or person is Republican or Democrat. Instead, the title of the article, along with a few subtle references in the text, suggests such a close correspondence between Republican politics and conservative Protestant beliefs that we shouldn’t be bothered that the supposed linkage isn’t actually measured. Similarly, though less of a jump, conservative Protestant affiliation is treated as synonymous with conservative Protestant beliefs, though no actual religious or family-related beliefs are measured. And, most importantly, as I’ll elaborate below, there is no measurement of actual involvement in conservative Protestant churches.

Second, a few intriguing findings in the article are likely to get buried in mass media coverage of the main storyline. Early in the article, Glass and Levchak point out that “the average county would double its divorce rate as its proportion conservative Protestant moved from 0 to 100%,” but then they note “this effect is much smaller than the unaffiliated effect which is almost three times larger [emphasis mine].” The evidence from this article does not suggest that marriages would be better off in non-religious contexts but actually points in the opposite direction. Additionally, the authors find that higher concentrations of conservative Protestants are associated with lower levels of cohabitation, which reduces divorce rates. Glass and Levchak’s later analyses show that these pro-marriage effects are offset by the aforementioned divorce risks of early marriage and lower educational attainment, but this finding nonetheless uncovers some anti-divorce factors in conservative Protestant counties. And most intriguing among these less-touted findings is that counties with the highest proportion of conservative Protestants (the top quartile) actually showed no elevated risk of divorce.

Counties with the highest proportion of conservative Protestants actually show no elevated risk of divorce.

Finally, “Red States, Blue States, and Divorce” leaves out a very important element to the story. While religious affiliation tells us something important about how religious groups impact divorce, it doesn’t tell us everything. Headlines featuring this article are likely to conjure images of active conservative Protestants, the ones who actually occupy pews on Sunday mornings and who, presumably, take to heart the pro-marriage messages of the movement. According to the logic of the article, it is the regularly involved conservative Protestants who should be most invested in promoting the “pro-marriage” norms that are paradoxically putting their marriages (and others’) at risk. But new data discussed below suggest just the opposite.

Figure 1 shows the proportion of ever-divorced young adults by religious affiliation and participation. These data are taken from the National Longitudinal Study of Adolescent Health (Add Health), a nationally representative study of young Americans who were first surveyed as teens in 1994 and most recently surveyed again as young adults in 2008. The young adults represented in Figure 1 got married between Waves III (2001-2002) and Wave IV (2007-2008), and they are grouped by their religious affiliation and participation at Wave III, before they were married. These young adults were all married at age 25 or younger, statistically early marriages for their generation. Thus, those who subsequently divorced represent relatively short marriages and early divorces. 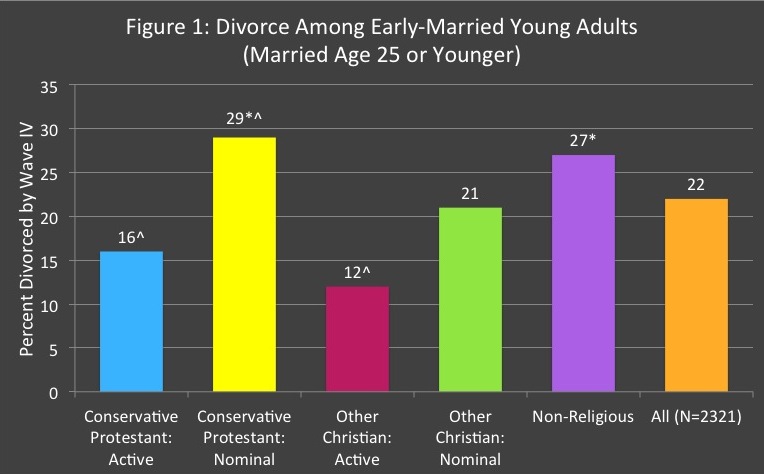 Young Christians who attend church frequently are significantly less likely to have divorced early in marriage than their non-religious peers.

Taken together, the additional considerations mentioned above along with the supplementary data, significantly qualify the main story of “Red States, Blue States, and Divorce.” While the article presents some provocative findings, worthy of attention and prompting further investigation, it shouldn’t be used to portray conservative Protestants as the unwitting enemies of marital stability. Instead, “Red States, Blue States, and Divorce” gives further evidence of the difficulty of sustaining marriages in contemporary America, and illustrates how religious communities traditionally associated with promoting lasting marriages can become ineffective, or even counterproductive, especially for those adherents who become unmoored from regular religious practice.