Family structure is widely known to be associated with children's chances of growing up in poverty, struggling or succeeding academically, and more. Relatively less attention is paid to to children's health outcomes—but those, too, are related to family structure, according to a large body of data from the CDC.

Controlling for a range of background factors—child's sex, age, race/ethnicity; parents' education level; and the household's income, poverty status, and health insurance coverage—researchers found that children from nuclear families were most likely to have healthy outcomes on most measures. Kids living with two married parents were more likely than those from other types of families to be in excellent or very good health, and less likely to suffer from chronic health problems, poor behavior, and severe emotional difficulties.

Before jumping into more detailed findings, the family structure categories require some explanation. Families were categorized into one of seven groups:

Note that the presence of any non-parental adult relative was enough to categorize a family as extended, meaning that category includes some families who would otherwise fall under nuclear, single-parent, etc. All figures use 2001–2007 data; a range of years was used in order to expand the sample size.

Here's a figure showing the prevalence of each type of family structure, for the sake of background: 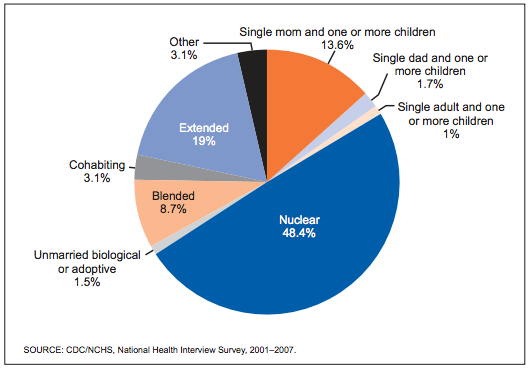 As the chart below shows, children in nuclear families are less likely than those in other types of families to be in only good, fair, or poor health (as opposed to excellent or very good health), according to the report of a parent or other knowledgeable adult in their family.

Percentages of Children in Good, Fair, or Poor Health by Family Structure 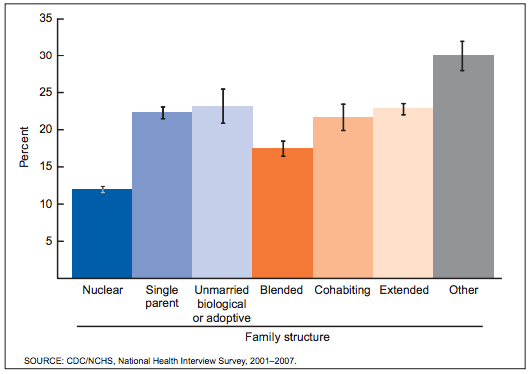 A similar pattern shows up on a measure of children's likelihood of having at least one chronic condition.

Percentages of Children with One or More Selected Chronic Conditions, by Family Structure 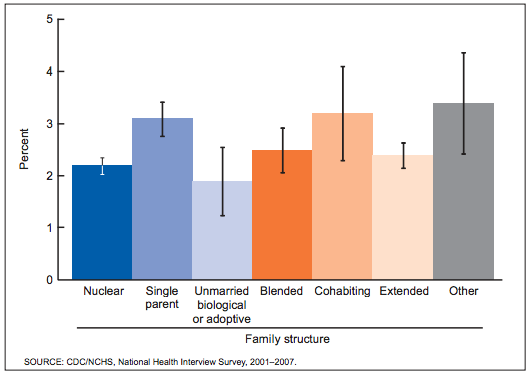 The findings on behavioral/emotional difficulties were also striking.

Percentages of Children Aged 4–17 Who Had Definite or Severe Emotional or Behavioral Difficulties, by Family Structure 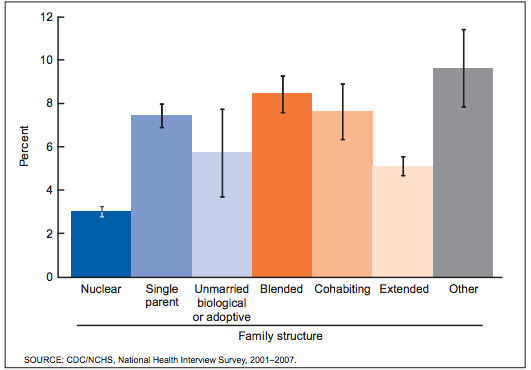 For many more charts and full details about data collection and methods, see the full report.

Interestingly, children living with unmarried biological/adoptive parents had outcomes very close to children in nuclear families on certain measures—occasionally they did even better (those with unmarried parents were less likely to suffer from hay fever and respiratory allergies, for instance)—but on others, they more closely resembled children from single-parent families. The relative rarity of such families in the U.S. makes it difficult for researchers to draw confident,  precise conclusions about their children's outcomes.

And obviously, family structure is one among many factors that matter for children's health. In the CDC data, lower socioeconomic status (conditions of poverty or near-poverty, or parental educational attainment of no more than a high school diploma) was associated with worse health outcomes for children in every type of family, and sometimes it essentially drowned out the association between family structure and health. On the other hand, family structure and stability are associated with children's health in many parts of the developing world, where access to health care is limited and where single-parent families are actually less likely than nuclear families to be socioeconomically disadvantaged. Teasing out all the determinants of children's health will take more research than is currently available, but at this stage, family background seems in many cases to be one significant factor.