Family Policy Should Not Ignore One-Third of American Families

by W. Bradford Wilcox, @BradWilcoxIFS Tanner Eastmond
Back to Blog

Presidential hopeful Hillary Clinton added an important detail to her family agenda this week, outlining a plan to double the child tax credit for families with children 4 and under from $1,000 to $2,000. This new offering comes on the heels of an earlier campaign rollout of a plan to make childcare more affordable by capping families’ expenditures on childcare at 10 percent of their income, with no commitment to extending similar support to families with a stay-at-home parent.

Clinton’s latest family policy proposal extends a helping hand to nearly all families with young children bearing the financial burden of raising the next generation. In contrast, her childcare plan leaves a substantial share of American families and children out in the cold. Indeed, her plan to spend billions subsidizing childcare for dual-earner families, but not for families with one parent at home, raises important questions about the division of paid and unpaid work in American families today:

In looking at both the real-world strategies and ideals of contemporary parents, it becomes apparent that no one model of handling work-family responsibilities describes the majority of American families. In fact, a large minority of families have a parent at home. What’s more: a majority of American parents believe having an at-home parent is ideal for kids. 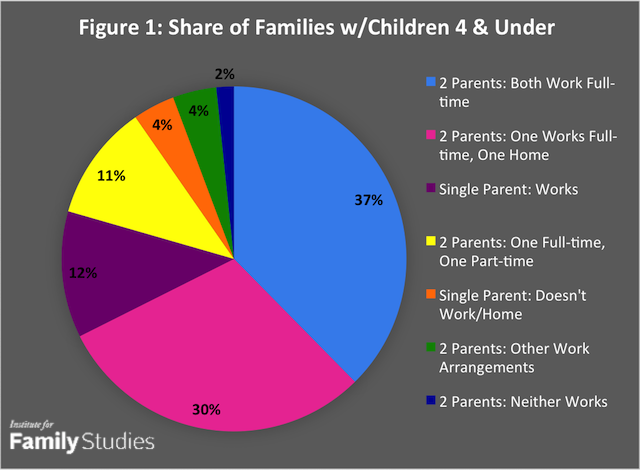 Figure 1 also indicates that no one model of dividing paid work describes the majority of America’s families with younger children. The biggest group—where both parents work full-time—only account for 37 percent of American families with children 4 and under. Even focusing on two-parent families alone, only 44 percent of these families have parents who both work 35 hours or more per week. 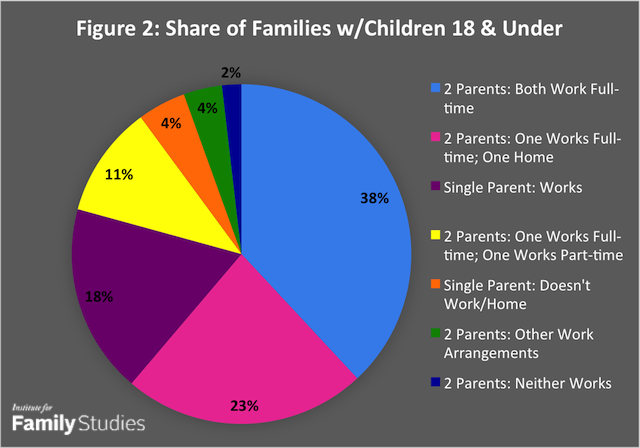 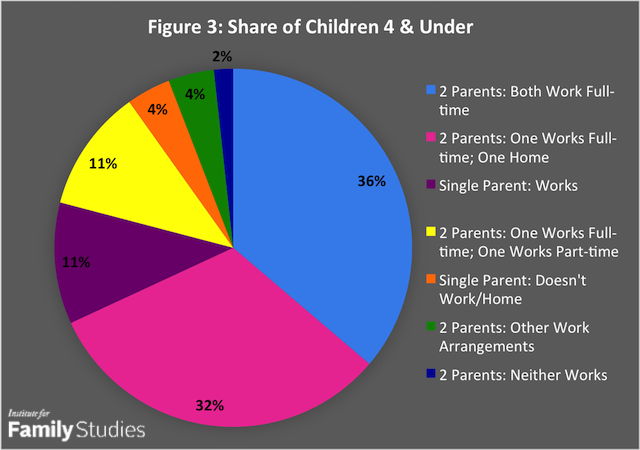 No One Best Way

When we turn to examining the ideal work-family arrangement for parents, no one best way emerges as the option chosen by a majority of mothers. The most popular choice for mothers is to work part-time, with 49 percent selecting this option, according to a recent New York Times/CBS News poll (see below). Still, what is striking about the poll is that no single approach captures the hearts and minds of a majority of American mothers. On the other hand, a slim majority of fathers—52 percent—prefer full-time work. But as the figure below indicates, even here we see considerable diversity in father’s preferences when it comes to paid work. In general, then, there is no clear consensus about work preferences among the majority of today’s parents. 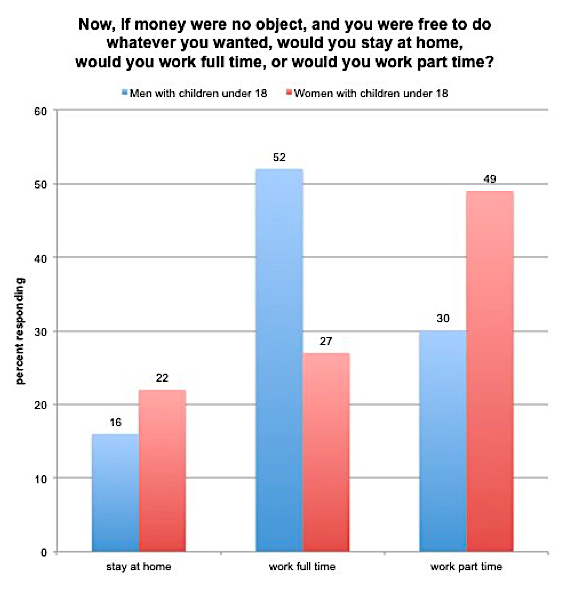 When it comes to directly considering the care of children, parents’ ideals about stay-at-home parenthood are somewhat different than their ideals about work. That is, both mothers and fathers are more likely to say that having one parent at home is ideal for children, even if that is not the majority preference for fathers or mothers themselves. Among parents with children younger than 18, 56 percent of mothers and 69 percent of fathers say it is better for children to have a parent at home, according to a 2014 Pew Research survey.

Taken together, these findings suggest a measure of ambivalence about juggling paid work, parenting, and family life among many American parents, with the ideal work schedule diverging somewhat from the ideal parenting schedule. As the survey data indicate, parents often value flexible work options and arrangements as they raise children, including the option of having one parent at home full-time for some or all of their children’s lives.

In crafting family policies, including those involving the care of children, policymakers should not lose sight of three social facts: 1) a large minority of families and young children are cared for by at-home parents, 2) most parents think having a stay-at-home parent is ideal for children, and 3), most fundamentally, no one model for dividing work and family responsibilities captures the contemporary reality of American family life.

Policymakers should keep this diversity in mind as they put forward tax and childcare policies intended to help all families juggle the demands of work and family life. Most importantly, they should avoid advancing family policies that leave one-third of families with young children out of the picture.

Bradford Wilcox is Director of the National Marriage Project at the University of Virginia and a senior fellow at the Institute for Family Studies. Tanner Eastmond is an undergraduate student studying Economics and Mathematics at Brigham Young University.