Faith and Family, Better Together? Religion and Family Around the Globe

All the attention devoted to the first Roman Catholic Synod on the Family, which wraps up this week at the Vatican, is but one sign that the ties binding hearth and altar to one another can still be the subject of considerable concern. That’s in part because the fortunes of the family in the West have largely ebbed and flowed with the fortunes of religious faith over the centuries, as scholars like Peter Berger, Robert Wuthnow, and Mary Eberstadt have noted.

Here in the United States, the increasingly secular caste of American society has gone hand in hand with a retreat from a family-focused way of life that prioritizes marriage and parenthood. As Americans have become less likely to defer to religious authorities—from the Pope to the pastor—and less likely to darken the door of a church on any given Sunday, they have also become less likely to tie the knot and have that third or fourth child. The figure below is indicative of how closely marriage trends in the U.S. track trends in church attendance. 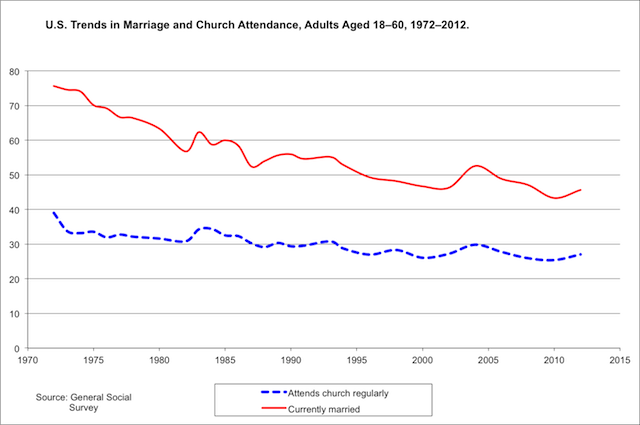 What accounts for the close relationship between hearth and altar in the West? As I noted in First Things:

Churches and synagogues give symbolic and practical support to family life. In such rites as a baptism and a bris, congregations erect a sacred canopy of meaning over the great chapters of family life: birth, childrearing, and marriage. Rabbis, pastors, and priests. . . offer concrete advice about marriage and parenthood. Congregations also have disproportionately high numbers of families who put family-centered living high on their list of priorities. These families offer moral and practical support to adults adjusting to the joys and challenges of married life and starting families.

Religious traditions also supply family-specific norms, like the importance of marital fidelity, as well as more generic norms, such as the Golden Rule. And they tend to endow these norms with transcendent significance. More generally, Berger has argued that, given their shared concern with meaning, solidarity, and the transmission of culture from one generation to the next, and their social proximity to one another in the private sphere, religion and family in the West have been inclined to work together, and reinforce one another. This is why religion is often a force for family in the modern world.

But does the close connection between religion and family life long observed in the West apply around the globe? I set out to answer this question by looking at 52 countries—from Armenia and Azerbaijan to Sweden and Singapore—around the globe, using data from the World Values Survey and the Population Reference Bureau.

When it comes to fertility, the answer is yes. The scatter plot below indicates that countries who have more citizens indicating that religion is important to them (from “not at all important” to “very important”) also tend to have higher fertility rates. Moreover, statistical analyses indicate that the link between religious salience, at the country level, and the total fertility rate (TFR), at the country level, is positive (p<.05), even after controlling for region, urbanicity, gross national income per capita, and income inequality in these countries. (Note, of course, that correlation does not necessarily equal causation here, and higher fertility might also predict greater religiosity.) 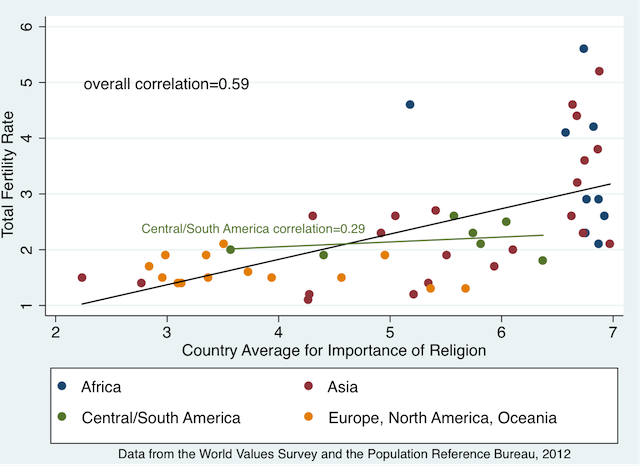 Indeed, the countries with the highest levels of religious salience in the sample—Nigeria and Yemen—also have the highest fertility rates: respectively, 5.6 and 5.2 children per woman in 2012. Certainly other factors are at play here, from low levels of education to strong kinship systems, but it’s likely that Christian and Muslim teachings celebrating the generation of life and customs and rituals honoring the sacrifices of fathers and mothers play a role in accounting for the close connection between fertility and faith around the globe.

When it comes to marriage, the connection between religion and family life is also positive. In most regions of the world, countries that are more religious typically have more adults aged 18–49 who are married. Indeed, there is a statistically significant (p<.05) association between religious salience, at the country level, and the percent of adults who are married, at the country level, even after controlling for region, urbanicity, gross national income per capita, and income inequality in these countries. The premium placed on marriage as the ideal site for lifelong love and childbearing by most of the world’s major religious traditions, the social value attached to the wedding rite, and the support accorded a wide range of marriage-friendly norms by most religious traditions all probably help to explain the religion-marriage connection found across much of the globe. (Again, the correlation shown here does not necessarily indicate the link between religiosity and marriage is causal, and it’s also likely that higher marriage rates predict greater religiosity in a country.) 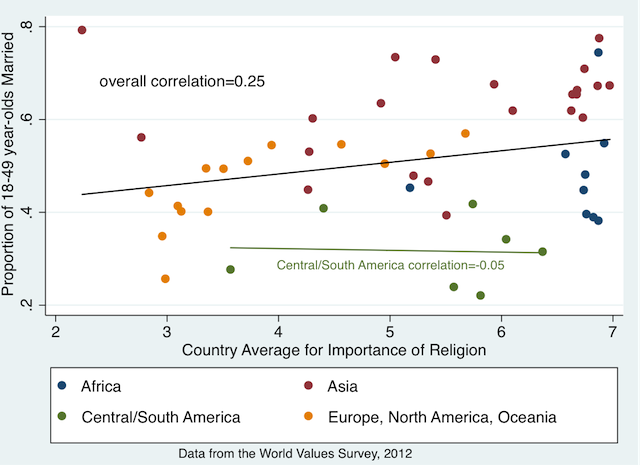 One exception to the generally positive religion-marriage link is Latin America, as the figure above indicates. In many countries in this region, cohabitation, single parenthood, and family instability are high, according to data from the World Family Map. And, yet, so too are forms of the Catholic and Protestant faith. Marriage is comparatively weak, and religion is comparatively strong, in countries like Colombia, Peru, and Ecuador. In these countries, religious faith may be a lifeline for women, children, and families in communities where the family is weak and poverty is common, places where—as political scientists Pippa Norris and Ronald Inglehart have argued—“existential insecurity” is high.

So, perhaps it’s no accident that Pope Francis has been making waves with his untraditional approach to tackling the issue of marriage. He may be less likely to associate strong families with strong faith, and more likely to see the ways in which religious faith can be a balm for fragile families. After all, in Francis’ native Latin America, the ties between hearth and altar are attenuated at best.

Still, the data tell us that the Latin American experience is exceptional, at least when it comes to marriage. In general, the fortunes of faith and family seem to operate in synchronicity. This is a lesson that the church leaders now meeting in Rome would do well to keep in mind.

W. Bradford Wilcox directs the National Marriage Project at the University of Virginia and is a senior fellow at the Institute for Family Studies. This article is co-published with Cornerstone and First Things.

The Institution of Marriage and the Virtuous Society