Even For Rich Kids, Marriage Matters

It is hard to count the ways in which Matthew Yglesias’ snarky attack in Slate on New York Times columnist David Brooks and Brooks’ reflections on the family is wrong, but two rejoinders are especially worth making.

1) Even privileged kids suffer when their family breaks down.

After noting that Brooks is getting a divorce, Yglesias wonders if Brooks will rethink his oft-expressed concern about family breakdown in America “in light of the breakdown of his own marriage.” Based on his “anecdotal experience growing up in affluent circles in Manhattan,” Yglesias thinks that divorce is ultimately of little consequence for the children of privilege, and that Brooks will come to realize this as he watches his own kids navigate life as children of divorce.

Sure, divorce can be “sad” for the children of privilege, but in the end it is no obstacle “to [these] kids going to college and maintaining a high socioeconomic status.” According to Yglesias, Brooks is likely to see that his children will “get along fine in life, possessing all the various [material and social] advantages that come from being David Brooks’ children.”

Sorry, Yglesias, your anecdotal experience doesn’t cut it on this topic. Not only do privileged children often get “sad” when their families break down, they are also markedly more likely to fail to graduate from college, to have a child outside of wedlock, and to lose the socioeconomic status of their childhood than their peers raised in an intact, married family. As I documented in a recent Atlantic article, for instance, the Add Health dataset shows that young adults from college-educated but non-intact families are about 31 percent less likely to graduate from college than their peers whose parents are married and college-educated (see below). 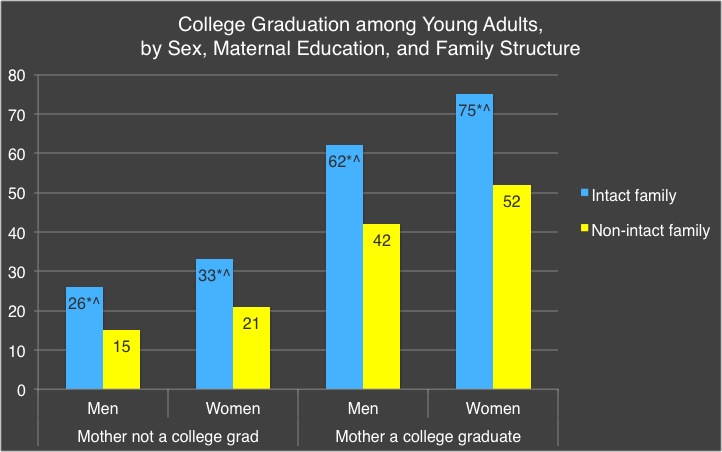 Analyses use data from Add Health Waves I and IV. Wave I was collected in 1995 when respondents were in middle and high school. Wave IV was collected in 2007 and 2008 when the participants were 24 to 32 years old. An asterisk (*) indicates a statistically-significant difference (p < 0.05) between respondents who lived with both, married biological parents at Wave I compared with respondents from other family structures, controlling for respondent’s age and race/ethnicity. A hat (^) indicates that there was still a statistically-significant difference when Wave I household income was added as an additional control.

And a recent report from Pew’s Economic Mobility Project finds that children from the top third of the income distribution are markedly less likely to maintain their station in life as adults if their parents divorce: specifically, “fewer children of divorced mothers whose incomes were at the top of the parental income distribution remain at the top compared with children of continuously married mothers (37 percent vs. 54 percent)” (see figure below). 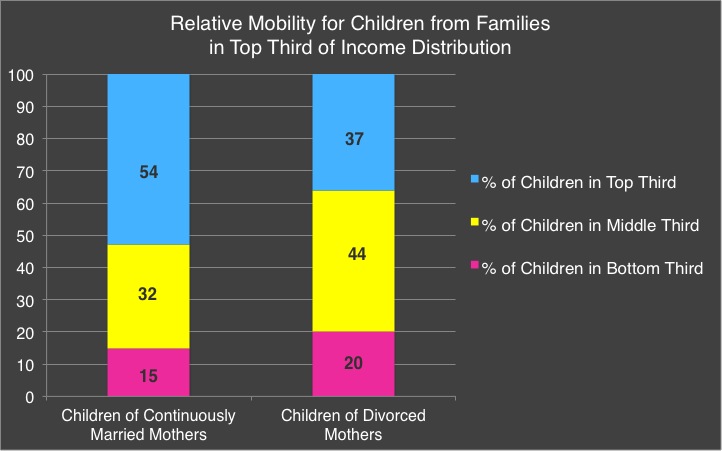 Evidently, Yglesias’ anecdotal experience in affluent Manhattan circles isn’t the best guide for assessing the impact of family stability on the lives of privileged children.

2) Money is not easily separable from marriage.

Yglesias also seems to think the problems facing poor and working-class Americans are separable from the breakdown of marriage that has swept their communities in the last four decades. He slams Brooks for writing about the decline of the family instead of analyzing “the drastically inegalitarian distribution of capital in the United States,” as though family breakdown has nothing to do with poverty and economic inequality.

Yet family breakdown not only is caused by material hardship, it also causes material hardship. People who get divorced are more likely to lose their homes, to stop pooling income, and to fall into poverty. So when divorce strikes, or families fail to form in the first place, there is less money for the necessities of life, not to mention the problems facing all too many poor and working-class kids, from bad schools to dangerous neighborhoods. This is why one study found that about 40 percent of the growth in household income inequality between 1976 and 2000 can be attributed to the breakdown of marriage in the less privileged precincts of America. Safety net programs can mitigate some of these problems to a limited extent, but as described above, family breakdown takes a toll even on rich kids.

The bottom line here is that money is not separable from marriage when it comes to family life. As Urban Institute economist Robert Lerman noted here and here, a substantial body of research suggests that on average, at every socioeconomic level, families headed by a continuously married couple will earn more money and accumulate more wealth than other types of families with similar educational and personal backgrounds. So even if you operate from a largely materialist framework, as does Yglesias, you should be concerned about the impact that family breakdown has upon children in less-privileged and privileged precincts in America.