Early Marriage Has Fallen, Especially Among Those Without a College Degree

With men and women increasingly delaying tying the knot these days, marriage among those in their early 20s is less common. In 2016, only 12% of young adults ages 22 to 24 have ever been married, according to my new analysis of the most recent Census data. Just over a decade ago in 2000, the share was 27%. 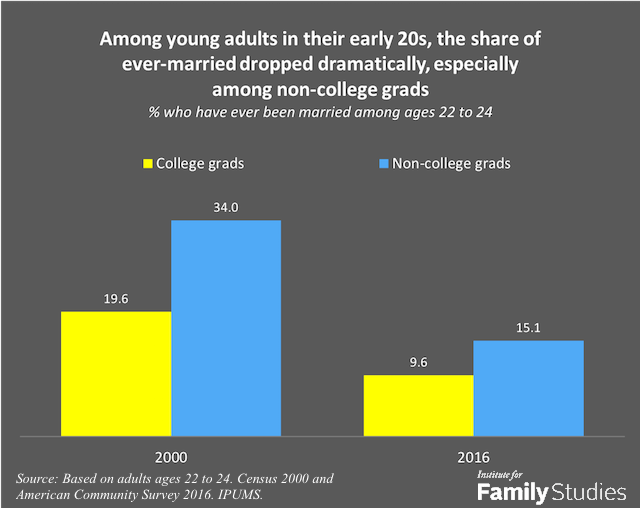 The pattern is similar when we look at the share of ever-married adults at age 25, a conventional age when the measure of educational achievement is more stable. In 2016, only 23.5% of 25-year-olds have been married, a drastic drop from 2000, when 45.4% of adults of the same age had ever been married. Again, the decline is more dramatic among adults without a college degree. By age 25, only about a quarter of adults without a college degree today have ever been married (25.8%), compared with almost half of non-college grads at this age in 2000 (49.5%). The share of ever-married adults among college grads at age 25 has also dropped, from 33.7% in 2000 to 18.6% in 2016.

College graduates overall are still getting married later than their peers who didn’t go to college. As of 2010, the median age of first marriage for college-educated adults is a couple years older than it is for adults without college degrees. However, this gap is shrinking.

Recent data on newlyweds suggests that adults without a college degree are quickly narrowing the gap in their age at first marriage with college graduates. Since 2008, the average age of first-time newlyweds among adults with a high school degree or less has gone up by nearly 2 years. In contrast, the average age for college-educated newlyweds has only increased by 1 year during the same period. In 2016, newlyweds among high school graduates were about 30 years old on average, only about 1 year younger than college-educated newlyweds. 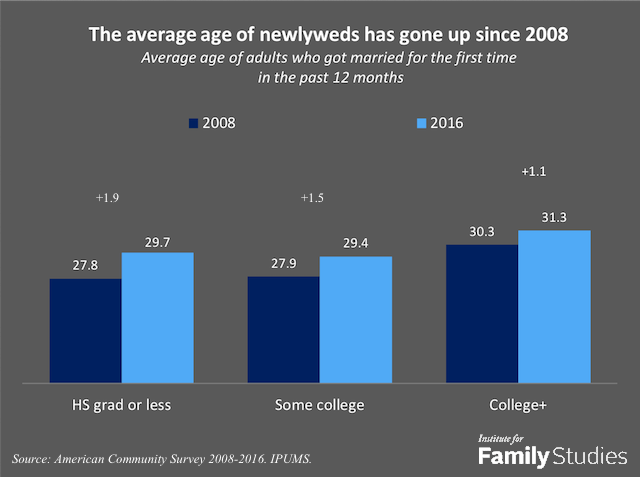 The most dramatic increase in the age at first marriage is among women with a high school degree or less. Between 2008 and 2016, the average age of first-time newlyweds for this group rose more than 2 years, from 26.7 to 28.9. Men of similar education levels delayed marriage by 1.8 years (from 28.6 to 30.4). The average age of newlyweds among women with some college education is also rising faster than it is among men of the same educational backgrounds.

It's long been believed that early marriages are associated with a higher risk of divorce. The odds of a lasting marriage (at least 15 years) are generally lower among adults who get married in their early 20s than among those who wed later. But recent research suggests that waiting longer to get married may not necessarily reduce the risk of divorce, either. In fact, the odds of divorce within five years of a first marriage are about the same for those who married in their early 20s and those who wed in their late 30s.

At the same time, college-educated men and women also have a lower risk of divorce than their peers without a college degree. Moreover, pre-marital cohabitation happens less often among young newlyweds than those who wed at age 25 or later. Finally, young adults under age 25 who attend religious services regularly are much more likely to be married than those who rarely or never attend religious services (13% vs. 4%), according to my analysis of recent General Social Survey data. These are generally protective factors for a stable marriage.

Few people calculate their risk of divorce before tying the knot. And the marriages of today’s young adults may or may not necessarily follow the pattern of older generations. So, if you happen to meet the right person in your early 20s and decide to get married, by all means, congratulations!

Wendy Wang is director of research for the Institute for Family Studies. Previously, she served as a senior researcher at the Pew Research Center.

Editor’s Note: This post is an update of a post published on March 14, 2018. The original post looked at marriage trends by education among all adults under age 25. It gave the misimpression that college graduates were more likely to be married young nowadays, compared to non-college graduates.