Editor’s note: We were saddened to learn last week that the Dutch sociologist Jaap Dronkers has passed away at the age of 71. He was known among his colleagues not only as an influential and prolific scholar but as an independent thinker unafraid to cause controversy. His work primarily revolved around education; we summarized some of his most recent studies on the subject late last year. Yet he took an interest in family issues as well. Below, we reprint one of his contributions to our blog on the factors linked to relationship (in)stability in Europe and the United States.

There has always been a fierce debate about the relationship between cohabitation and divorce risks. Some argue that cohabitation lessens people’s commitment to partnership and thus increases their risk of divorce, while others believe that a cohabitation phase before marriage (as a trial marriage) would strengthen marital stability. In the United States, data suggest that the effect of cohabitation on marriage is at best neutral; however, in European countries, the effect of cohabitation on marital stability varies markedly, according to a study covering the last decade of the twentieth century (Liefbroer and Dourleijn, 2006).

I replicate some of Liefbroer and Dourleijn’s analyses with data from the first decade of the twenty-first century: the Gender and Generations Programme (GGP), a longitudinal survey of 18- to 79-year-olds in 19 European countries. I use the available harmonized data of the first wave of GGP. The harmonized data are purposely recoded and cleaned in order to ensure the highest level of cross-national comparability of union formation, childbearing, and union dissolution. Data from the American National Survey of Family Growth and the British Household Panel Study were included by GGP in the harmonized data, allowing me to test whether the USA is an outlier in family formation and union instability. I used the same data in my blog post about the optimal age to marry in Europe. 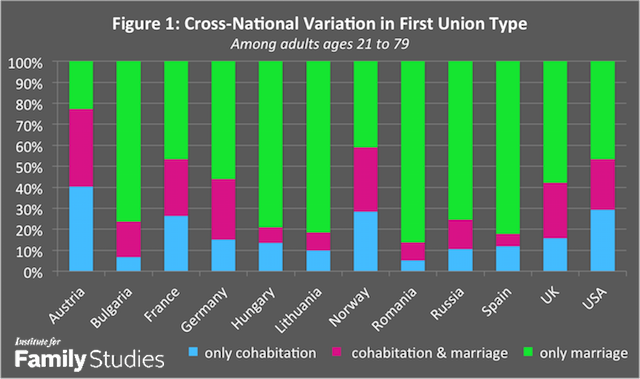 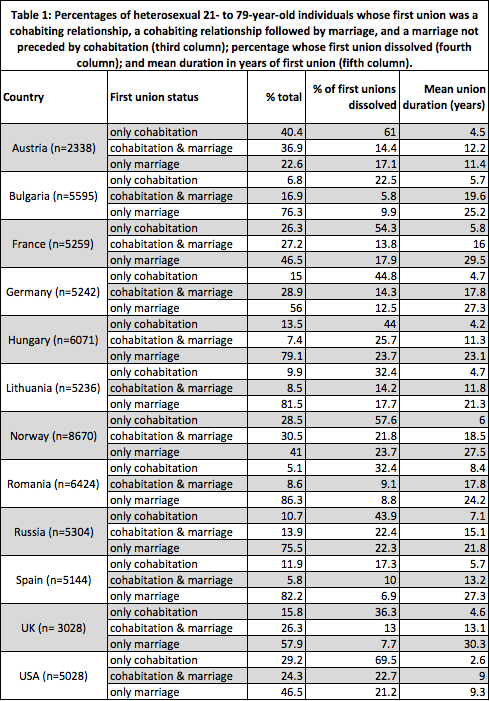 Notes: Table shows only EU member-states plus Russia and the U.S., and only countries with valid information on religious affiliation. Only first unions that started after the age of 20 are included. Unions ending in the death of a partner are excluded. Weighted with a variable constructed by GGP to make the results nationally representative and account for non-response and research design.

Why such variation in union formation and stability? The legal foundations of cohabitation and marriage differ from one European country to another. In some countries, like the Netherlands, simply living together for a few years provides a legal basis to the cohabitation and allows the couple to act together (for instance, to obtain a home mortgage based on both partners’ incomes). In other countries, establishing a legal basis for cohabitation may require a contract drawn up by a notary, or a registration at the town hall (France). Further, in some countries, dissolving a legalized cohabitation has to be done in court, especially if there are children involved.

In most European countries (especially those that have used the Napoleonic Code Civile for their own laws), getting married is not a religious act, but a secular one that must take place before any religious marriage ceremony. This is the case in the Netherlands, for example. And even in places like Italy where one can become legally married within a religious ceremony, only civil laws, not the laws of the religion, are relevant for the ceremony’s consequences (for instance, divorce). Therefore, in some nations, the differences between a legalized cohabitation and a marriage are slim. When couples can enjoy some of the legal and financial benefits of partnerships without marrying, they may be more likely to simply cohabit.

Of course, many other factors relevant to union status and relationship stability also vary from country to country, such as religion. Bradley Wright recently showed that in the United States, Catholics, Jews, and mainline Protestants have lower divorce rates than Americans of other religious backgrounds. European countries’ levels of public non-religiousness and religious composition deviate strongly from those of the USA, however, so the story may be different in Europe (Bruce, 2002; Davie, 2002). I also investigate this question below.

Figure 2 and the fourth column in Table 1 show the prevalence of union disruption by union type and country for 21- to 79-year-old individuals who were interviewed at the beginning of the twenty-first century. For example, in the United States, 70 percent of individuals whose first union was a cohabiting relationship not leading to marriage have dissolved their union, versus only 23 percent of the individuals who cohabited then married and 21 percent of those whose first union was a marriage not preceded by cohabitation. There is a large variation in union disruption across union type and country, but France, Norway, Russia, and the USA have the highest disruption risks across the three union types. However, this might be explained by differences in background variables (like union duration, education, and religion). 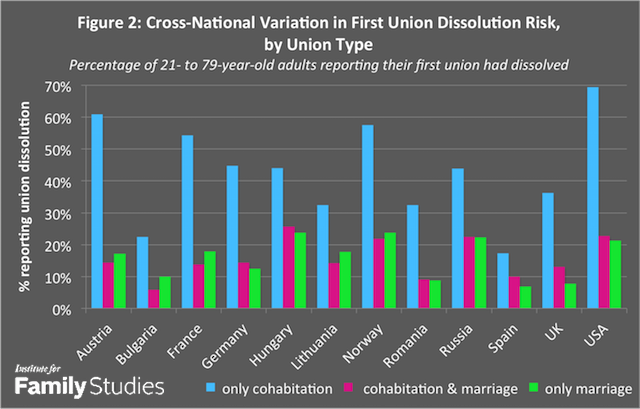 The last column of Table 1 shows the mean union duration by union type and country for the same group of individuals. In most countries, cohabiting relationships had the shortest duration, and marriage-only unions the longest duration, with cohabiting-then-married unions in between. Austria and the USA are exceptions: cohabiting-then-married and marriage-only unions have the same average duration. Cross-national variation in duration of union type can be explained by a combination of three possible processes: 1) Cohabitation lasts less long, while marriage has a lower dissolution risk; 2) Any union has a higher overall disruption risk the longer it lasts; 3) The older respondents could only choose marriage, while the younger respondents could also choose cohabitation. Therefore, it is important to control for variation in union duration.

Table 2 shows the risk that each type of marriage will end in divorce, relative to the likelihood that a cohabiting relationship will dissolve, controlling for union duration. However, the results of the first column of Table 2 (with the duration control) more or less correspond to the percentages in the fourth column of Table 1 (without controlling for duration). The cohabiting-then-married and marriage-only unions are much less likely to end in a split than cohabiting relationships, even if one takes duration into account. (The disruption risks for both types of married individuals in all countries are far lower than 1.00, the number that would indicate a break-up rate identical to that of cohabiting individuals in the country.) 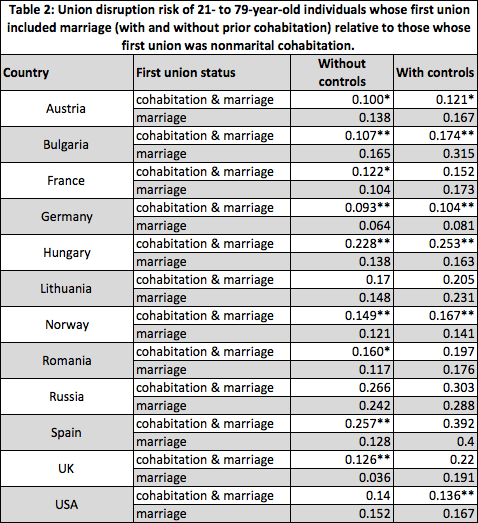 Notes: Lower than 1.00 means lower disruption risk. Cox regression with union duration. Controls: year of birth, religious affiliation, age at union, square age at union, educational level, partner divorced previously, parental divorce, and children of the first union. Stars refer to the significance of the difference between the disruption risk of the two types of married individuals. All differences between “only cohabitation” and “cohabitation & marriage” or “marriage” are significant at p <.001. * = difference between “cohabitation & marriage” and “marriage” significant at p <.05; ** idem at p <.001.

The divorce risk of married individuals who cohabited first and those who did not are similar in most countries. In some countries, individuals whose first union was a marriage following cohabitation faced a slightly lower divorce risk than those who married without cohabitation (Austria, Bulgaria, U.S.), while in other countries the reverse was true (France, Germany, Hungary, Norway, Romania, Spain, UK).

These outcomes might be misleading, because union type might be related to variables that also influence dissolution risks. One example is age at first union: Young couples might prefer cohabitation, but being young also increases the risk of disruption. Another example is the commitment of the partners to their union. Making children is one symbol of commitment (family planning is very common in European countries, including Catholic ones). Therefore, in Figure 3 and the fourth column of Table 2, I control for a number of variables, including age and the presence of children, that might bias the results. Controlling for these variables does not change the overall outcome, though it makes the differences in disruption risks between cohabiting unions and marriages smaller. In France, Lithuania, Romania, Russia, Spain, and the UK, the controls make the differences statistically insignificant. 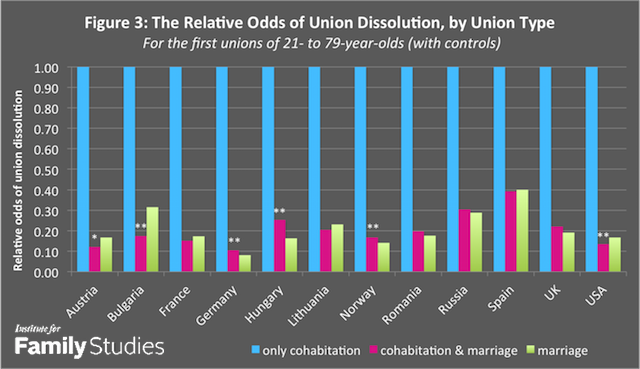 Simple explanations of the elevated disruption risk of cohabitation are not available. First, all unions starting before the age of 21 were excluded and union duration is controlled for, so young age at union formation cannot explain the results. Second, since I controlled for religious affiliation, age at marriage, educational level, and children, it is unlikely that cohabitants’ elevated risk of breaking up can be entirely attributed to a low level of commitment to their union. Third, cohabiting couples in France and Norway, nations with generous public welfare systems, face the same high disruption risk as cohabiting couples in the United States, meaning the weaker social safety net in the U.S. cannot explain American couples’ disruption risk. But it also means that the economic reasons behind cohabitation instability in the USA do not apply as much in countries like France and Norway, while the disruption risk in these countries is as high as that of the USA. The only explanation might be negative selection of cohabiting individuals who did not marry: Brien, Lillard, and Stern (2006) show that a significant cause of cohabitation is partners’ desire to learn about potential partners and to hedge against future surprises. These dynamics lead to a negative selection into “only cohabitation” and a positive selection into “cohabitation and marriage”: only the strongest, most committed cohabiting couples get married. The more structural control variables do not sufficiently cover this unmeasured selection. 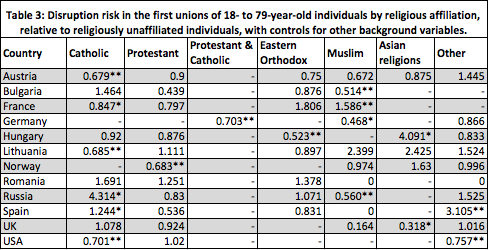 These simple analyses suggest that cohabitation itself does not increase disruption risks in an individual’s first union, but that those who cohabit without strong commitment (commitment symbolized, for instance, by later marrying) face a high dissolution risk. There is no systematic difference in divorce risk between individuals whose first union was only marriage and individuals who cohabited with their eventual spouse prior to marrying. These results hold true for many countries, and thus cross-national differences in social welfare policies, legal arrangements, and cultural and social characteristics cannot explain them away. Religious affiliation seems to give no automatic protection against union dissolution: in some cases, it can even lead to higher disruption risks than unaffiliated individuals face. Much depends on the historical background of the various religions in the different countries.