Change and Stability in How Couples Think About Divorce

by Alan J. Hawkins
Back to Blog

“Well...on a day-to-day basis, that does change because, you know, something might happen and it makes me feel like, okay, I can do this...Then there are days when, its just like, okay, this is just not going to work or we are right back where we started, and I thought we solved this, but then we didn’t,”—a 31-year-old woman, who has been married for 8 years, explaining her frequent thoughts about divorce in an interview with researchers.

Last year in a Family Studies blog post, we summarized findings from a national survey of 3,000 married individuals (ages 25-50) that focused on thoughts about divorce. The survey, part of the National Divorce Decision-Making Project,1 asked a set of questions about what we labeled “divorce ideation,” which is what people are thinking about and doing when they have thoughts about divorce. We also conducted in-depth interviews with a small sub-sample of 30 respondents to get a more fine-grained perspective, and our team has posted a number of Family Studies blog posts recently based on what we are learning from these in-depth interviews about divorce ideation and decision-making.

Soft Thinkers. About half of these recent thinkers (11 percent) were soft thinkers (see Chart 1), which means their thoughts about divorce were infrequent. They had fewer problems and not often the most serious kind. And most wanted to work hard to improve the marriage and avoid divorce. They were more hopeful about the future and had more clarity about which direction they were headed —their occasional thoughts about divorce didn’t seem to be an indication of a doomed marriage and an impending divorce.

Serious Thinkers. We labeled a second group as serious thinkers (12 percent). They thought about divorce more frequently and reported more problems. Still, basic “connection issues” dominated—feeling like the relationship had lost its sizzle. There was less hope for the future and less commitment to the marriage, but even among the serious thinkers, only a small percentage were throwing in the marital towel. This group was struggling for clarity about which direction to go.

Conflicted Thinkers. A third, small group (2 percent) included conflicted thinkers,2 who reported the highest level of problems, including intense problems. And they reported the highest levels of conflict and, by far, mental health problems affecting the marriage. About a third said they were done with the marriage, which was the highest endorsement of this attitude. But curiously, this small group also had the highest scores on relationship hope, and the highest scores on struggling for clarity and feeling like a failure if their marriage ended. This was the most religiously devout group of thinkers, which may help explain some of these conflicted thoughts. 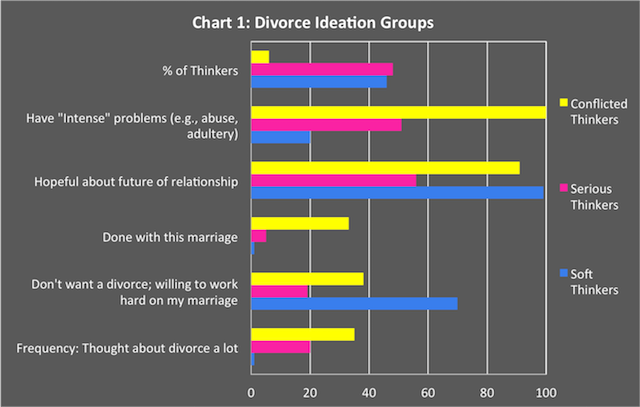 Changes in Divorce Ideation Over Time

But we wanted to go beyond this snapshot to see how divorce ideation changed or stayed the same over time. So, we surveyed this same group of individuals one year later; 75 percent of Time1 survey participants responded to our Time2 survey, which is a good response rate for this kind of survey.3 From this follow-up survey and our in-depth interviews with a small subsample of thinkers, we found that divorce ideation is not only common but also dynamic; that is, there’s a lot of change over a year. These findings are summarized in Table 1. 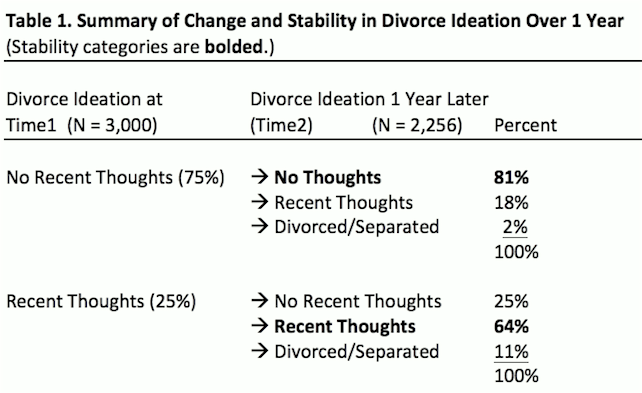 Ninety-six percent of respondents were still married to the same person one-year later, but 4 percent were separated or divorced. Of those who were divorced or separated at the Time2 survey, 3 percent had been thinking about divorce at Time1, and 1 percent had not thought about divorce earlier, indicating that, occasionally, divorce is unanticipated and fast.

Among the participants who were not thinking about divorce during our first survey (75 percent), stability was dominant. For example, most of them (81 percent) were still not thinking about divorce at the Time2 survey. However, 1-in-6 of these non-thinker respondents became thinkers by Time2. And a few (two percent) had even separated or divorced, indicating again that, occasionally, marital dissolution comes unexpectedly and quickly.

Also, we saw a good deal of change among participants in our soft, serious, and conflicted thinkers groups. About half of soft thinkers at Time1 remained soft thinkers at Time2, with about 1-in-7 becoming serious thinkers. Only 1 percent had divorced or separated by Time2. But almost a third had transitioned to non-thinkers.

Only one-third of those who had been thinking about divorce in our first survey reported the same personal attitude about divorce a year later.

In addition, instability in divorce ideation was prominent when looking at personal attitudes about getting a divorce. Only one-third of those who had been thinking about divorce in our first survey reported the same personal attitude about divorce a year later. For instance, among the small number of thinkers who said at Time1 that they were done with the marriage, just 36 percent reported the same attitude one year later, while 41 percent reported different attitudes that suggested more openness to staying married, including 23 percent who reported not having recent thoughts about divorce. (Note 18 percent of this group had divorced by the second survey, or one year later.) Among the thinkers who said at Time1 they wanted to work hard on the marriage, 37 percent had that same attitude one year later, while 44 percent reported no recent thoughts about divorce.

What Can We Learn?

We believe that marriage therapists and educators (and even divorce mediators/lawyers) can use our findings to help individuals and couples thinking about divorce better understand what they are experiencing. Divorce ideation is common. In a culture with widespread experiences with and concerns about the fragility of marriage, it may be unavoidable that thoughts about divorce intrude on people’s consciousness when marital problems arise. Moreover, the idea that marriage is foremost a romantic union further focuses attention on emotional fulfillment as a primary barometer of marital health, setting high expectations for marriage. When these expectations are not fully met, some disillusionment will result and thoughts about divorce will surface.

But divorce ideation does not imply divorce action. Thoughts about divorce are just that—thoughts, not decisions. It means ruminating on the marriage and its prospects, and whether a divorce should be considered. Many people think about divorce, but these thoughts dissipate, or they don’t lead to a decision point quickly.

Of course, for some, divorce is needed to end a dangerous or demeaning relationship, and therapists and educators can help clients clarify this for themselves. But for many others, perhaps thoughts about divorce can be the motivation needed to take some action to repair a relationship. In fact, many of the thinkers in our study reported they were taking various actions to try to strengthen their relationship and reported that they were helpful.

Finally, knowing what someone is thinking or not thinking about divorce at one time is useful, but it does not give a clear picture of the future because divorce ideation is a dynamic phenomenon, ebbing and flowing over short and longer periods of time, as illustrated in the quotation at the beginning of this blog from a woman in our study whom we interviewed in depth. Over a year, thoughts about divorce dissipate or disappear for many. Normalizing this may help individuals who are thinking about divorce realize that there doesn’t need to be a rush to premature decision-making about the future of the marriage.

2. In our earlier analyses, we identified only soft and serious thinkers. But more refined analyses recently identified this small and unique third group of conflicted thinkers.

3. The response rate was 80 percent of all respondents who could be contacted. We found very few differences between those who responded to the Time2 survey and those who did not respond.