It’s risky to generalize about American families, and doubly perilous to do so about families all around the globe. One of the few observations that obtains just about worldwide is this: Marriage is on the decline. In some countries, it’s been partly replaced by nonmarital cohabitation—which, despite resembling marriage in the eyes of many adults, reduces children’s chances of growing up with two parents. 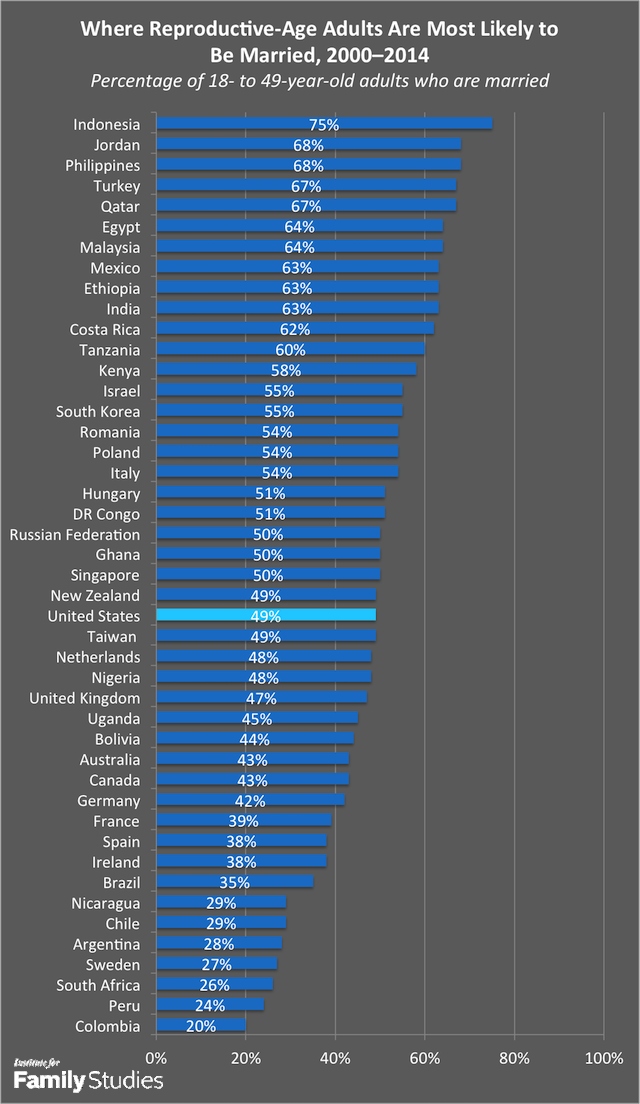 Source: World Family Map Report, 2015. See here for full information on the source for each country.

Between 47 percent (Singapore) and 77 percent (India) of the adult population in the Asian countries included in the World Family Map are married, and marriage is even more common in the Middle East, where a clear majority of adults (from 55 percent in Israel to 80 percent in Egypt) are married.

By contrast, marriage patterns fall in the middle range, or are less consistent, in the Americas, Europe, and sub-Saharan Africa. In North America and Oceania, about half of 18- to 49-year old adults are married. Notably, the percentage of adults married in the United States fell from 52 percent in 2005 to 45 percent in 2010. In the sub-Saharan African countries studied, marriage patterns show a great deal of variation: anywhere from 30 percent (South Africa) to 66 percent (Nigeria) of adults aged 18-49 are married.

Among the European countries in the World Family Map, between 37 (Sweden) and 60 percent (Romania) of adults aged 18-49 are married, with marriage clearly being more common in Eastern Europe. In most Central/South American nations, less than half of adults are married; in Colombia, the proportion of married adults is a worldwide low of 20 percent.

Even more so than marriage, nonmarital cohabitation means different things in different places and is far more mainstream in some countries than others. 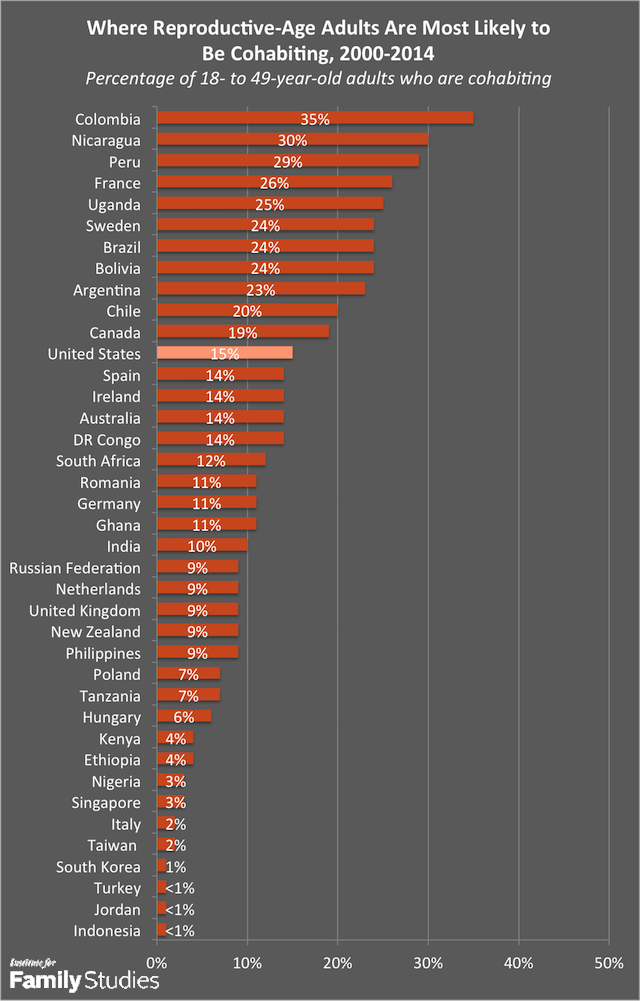 Source: World Family Map Report, 2015.  See here for full information on the source for each country.

Cohabitation is rare in Asia and the Middle East, two regions where relatively traditional mores still dominate family life. In fact, cohabitation is such a sensitive topic in these regions that some surveys do not ask about it. North America and Oceania exhibit moderate to high levels of cohabitation: Between 9 percent (New Zealand) and 19 percent (Canada) of adults aged 18 to 49 are in cohabiting relationships in these regions. Levels of cohabitation in sub-Saharan Africa vary considerably; they are relatively high in Uganda (25 percent) and low in Ethiopia (4 percent), Kenya (4 percent), and Nigeria (3 percent).

Levels of cohabitation are elevated in much of Western Europe. For example, about one-quarter of Swedish and French adults aged 18 to 49 are living in cohabiting relationships. Cohabitation is most common, however, in South America, where consensual unions—long-term cohabiting relationships, often involving childbearing, that may or may not ever lead to legal marriage—have played a longstanding role in society. Between 20 percent (Chile) and 35 percent (Colombia) of reproductive-age adults are part of cohabiting unions in South America.

For adults, marriage and cohabitation offer many of the same benefits. In the words of scholar Paul Amato, who has found that the two arrangements offer similar mental health benefits to young Americans, “one doesn’t need to be legally married to a residential partner to enjoy companionship, intimacy and everyday assistance. Moreover, living together and marriage provide the same economies of scale, which can reduce people’s feelings of economic stress.”

Yet nonmarital cohabiting relationships are far less stable than marriage, and largely for that reason, the two partnership forms do not provide equally favorable environments for raising children. The figures below, based on data from dozens of countries included in the World Family Map, illustrate that the greater the prevalence of marriage among reproductive-age adults, the more likely children are to live with two parents. 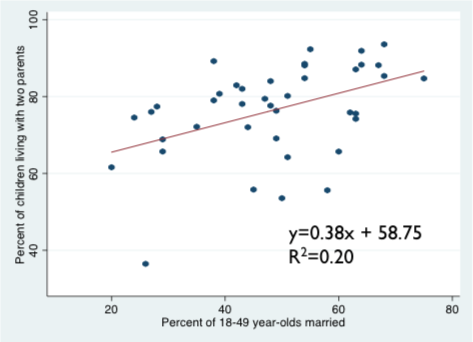 The greater the prevalence of cohabitation, in contrast, the more likely children are to live with one parent or no parents. 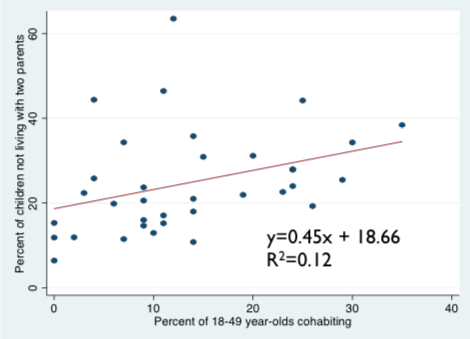 There are outliers and exceptions to these trends at the national and local levels; plenty of children born to married parents see their parents divorce, while some unmarried couples with children provide a stable, two-parent home. In general, however, and in spite of the ways families are changing around the globe, marriage continues to offer the most stable context for bearing and rearing children.

This suggests that the global retreat from marriage will leave more children landing in homes headed by a single parent or no parent. In other words, when marriage disappears, so too does the two-parent family.

This post includes text adapted from the 2015 World Family Map Report, which was sponsored by Child Trends and the Social Trends Institute and cosponsored by the Institute for Family Studies.

Is Cohabitation Still Linked to Greater Odds of Divorce?

Number 8 in 2020: The Collapse of International Adoption is a Tragedy