For a long time, the prevailing assumption in the social sciences has been that married people, husbands and wives alike, are happier than their unmarried peers. Nearly 25 years ago, sociologist Linda Waite made this point in her presidential address to the Population Association of America. More recently, Brad Wilcox and I presented data to this effect in our 2016 book Soul Mates.

How strong is the relationship? Data from the General Social Survey (GSS) collected between 2010 and 2018 are representative: 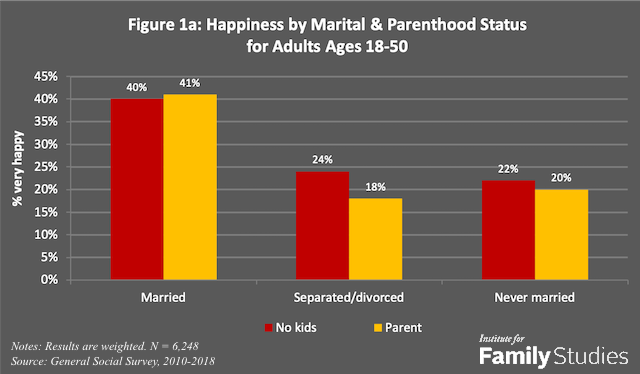 The story is straightforward: married respondents are much happier. And consistent with prior research, parents are a little less happy than non-parents, provided they are unmarried. In addition, the results don’t look that different when limited to female survey respondents (as shown below). 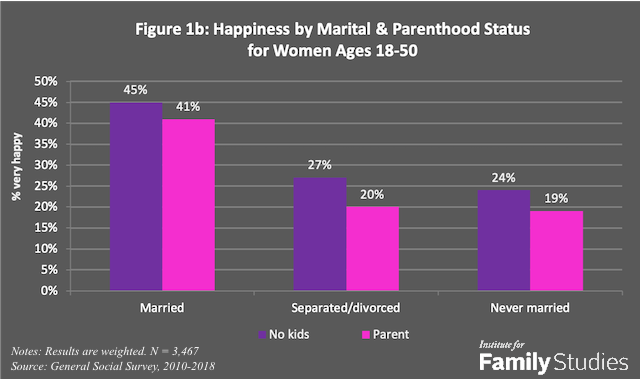 Here are the mirror image results for adults, looking at unhappiness rather than happiness. The same pattern holds. 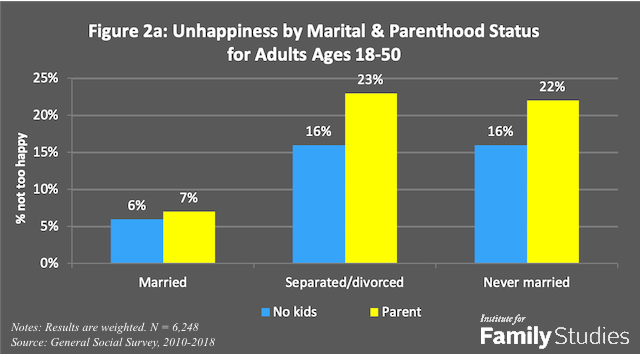 We can observe a similar pattern when the sample is limited just to women. Children increase unhappiness a little more for separated/divorced and never-married women, likely in response to the challenges of being a single mother. 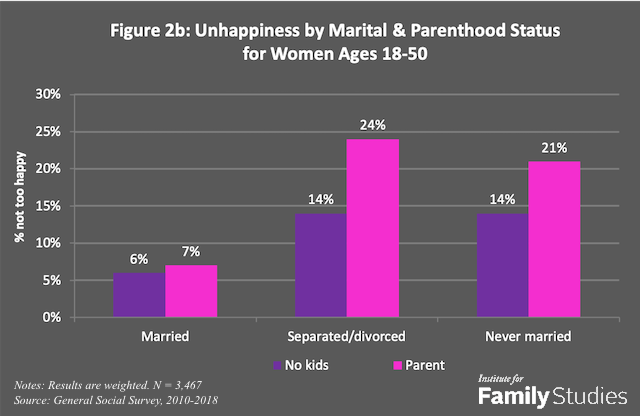 It was therefore surprising to me to read an interview with London School of Economics professor Paul Dolan in the Guardian, in which he offered this pointed assessment:

Married people are happier than other population subgroups, but only when their spouse is in the room when they’re asked how happy they are. When the spouse is not present: f***ing miserable.**

Dolan was promoting his recent book, Happy Ever After. The basis of his claim was data from the American Time Use Survey (ATUS) analyzed by his doctoral student, Laura Kudrna. ATUS is different from many national surveys in that respondents track their quotidian activities on an hour-by-hour basis. Dolan uses these data and other sources to write a lucid and probing account of the things that make people happy, and unhappy. In particular, I second his call for hedonic measures as well as the traditional economic indices when measuring national well-being in the developed world.

But does ATUS really support claims about the misery of marriage? Dolan’s data suggest otherwise.

His contention about the misery of marriage appears to be based on Figure 10 of Happy Ever After. Unfortunately, I wasn’t able to reach Dolan before this article went to press, so I was unable to secure permission to reprint his figure. Further complicating matters, the figure lacked numerical labels that established precise levels of misery by marital status.

My solution is, in effect, to anonymise Dolan’s figure by reverse-engineering it:

The figure is measuring unhappiness by marital status on a scale from 0 (not unhappy) to 6 (very unhappy). Each bar corresponds to a different marital status, with married respondents broken out into “spouse present” and “spouse absent” categories. Contrary to what Dolan implies in the Guardian, the figure covers both wives and husbands. It isn’t clear whether it includes same-sex unions.

With average scores ranging from approximately 1.2 to 1.4, it’s pretty apparent that few ATUS respondents are very unhappy. Of greater importance is the fact that the .2 difference between bars represents the entirety of the difference between “happy” and “f***ing unhappy” as represented by Dolan in the Guardian interview.

No matter what the answers are, the bottom line is that the differences shown in Dolan’s Figure 10 are all pretty trivial in substantive terms. The Guardian assessment would, therefore, appear to be hyperbole. That having been said, I know from long personal experience that the media sometimes gets the story wrong when reporting on scholarly research, so it’s possible that Sian Cain, the author of the Guardian article, or her editors botched the finding.

The most interesting part of Dolan’s findings is the suggestion that people say they feel better about their lives when their spouses are in the room. This represents a new contribution to the scholarly literature, even if the magnitude of the effect is weak.

The story becomes clearer after looking at the ATUS questionnaire. First, it’s important to note that general happiness is being measured, not happiness within one’s marriage. The two are related to be sure, but far from perfectly. The GSS has separate measures of marital happiness and overall happiness, and the correlation coefficient between the two is .39.

Second, ATUS isn’t exactly measuring who’s in the room. Instead, respondents are asked this question, "Were you interacting with anyone during this time, including over the phone? (Yes/No)".

Presumably, a spouse in the room is the most likely reason for an affirmative answer to this question, but there are many other possibilities: children, friends, a telemarketer from Xfinity Comcast, and so on. It should also be noted that ATUS data are collected by a combination of time-use diaries and telephone surveys, not in-person interviews.

But let’s put all these concerns aside and take Dolan’s finding at face value. How can his finding be explained? Here’s what he has to say about it on page 69 of his book:

It appears that people are more likely to say they feel happy if their spouse can hear what they are saying. Or it could simply be that their spouses put them in a better mood, which influences how they recall their experiences yesterday. (My money is on the former.)

I’d like to think he’s wrong here, and his data do little to convince me one way or another.

*Editor's Note: It is the policy of the Institute for Family Studies not to print profanity out of respect for our readers.

**As of May 31, 2019, Dolan has privately retracted his results about the presence of a spouse affecting marital happiness. As a result, the assessment of marriage as “f***ing miserable” has been stricken from the Guardian article.