An Optimal Age to Marry? Age at Marriage and Divorce Risk in Europe and the US

For years, one of the standard findings in divorce research was that marrying later is related to lower odds of divorce (Wolfinger, 2003). A recent analysis of American data has called that conclusion into question. It appears that these days, Americans who marry in their late twenties or early thirties face the lowest odds of divorce. Can the same be said of people in European countries? My analysis of data from many European countries, detailed below, suggests the answer is yes, if they live in a country with a high level of divorce.

In a recent blog post, Nicholas Wolfinger revisited the linear relationship between age at marriage and divorce using data from the American National Survey of Family Growth (NSFG 2006-2010). The NSFG respondents were married between 1976 and 2009. He found that the linear relationship no longer existed in the USA, but had been replaced by a quadratic relationship. That is, divorce odds don’t consistently fall as age at marriage increases; rather, the lowest divorce odds are for those who marry around the age of 28. 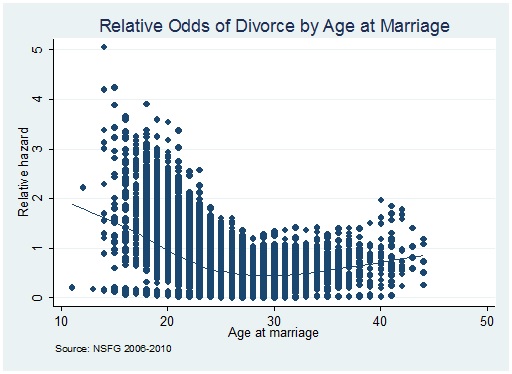 Responding to Wolfinger’s conclusions, Philip Cohen showed a comparable finding from the American Community Survey in his blog post. His figure below gives divorce probabilities per combination of age at marriage and years of marriage, controlling for education, race/ethnicity and nativity. Given this table, Cohen stresses the importance of the linear relation (the way divorce odds fall sharply as marriage is delayed from the late teens to the late twenties, and rise only modestly, if at all, after that) in comparison with the curvilinear one.

My first aim of the current blog post is to replicate these findings from the USA for a number of European countries. Divorce and marriage patterns are different between the U.S. and Europe in that there is more divorce in the U.S. and more cohabitation in Europe. Also, patterns vary within Europe (Catholic versus protestant countries; egalitarian welfare states versus market-oriented).  My second aim is to see whether unions (with or without a marriage or civil contract) produce different outcomes compared to only marriage.

I use data from the Gender and Generations Programme (GGP), a longitudinal survey of 18- to 79-year-olds in 19 European countries from the first decade of the twenty-first century.  I use the available harmonized data of the first wave of GGP in order to ensure the highest level of cross-national comparability. (The data from the American NSFG and the British Household Panel Study are included in these harmonized data.)  I restrict the analyses to respondents who were born after 1940 and started their first union/marriage after the age of 14 and before the age of 50. I analyze first union or marriage only and whether they ended in union dissolution or divorce. I use both male and female respondents and I do not control for any background characteristics.

Table 1 shows the relationships between age at first marriage and divorce risk in the USA and Europe. Note that this is a conservative estimation of the validity of a curvilinear relation between age at marriage and divorce risk, because the quadratic parameter is added to an equation that already contains a linear parameter. This means that the curvilinear relation must be prominent to be accepted. The background variables are educational level and whether the partner had already children from an earlier union. For some countries the quadratic parameter of age at marriage is highly significant in the two equations: Estonia, Russia, UK, and USA. 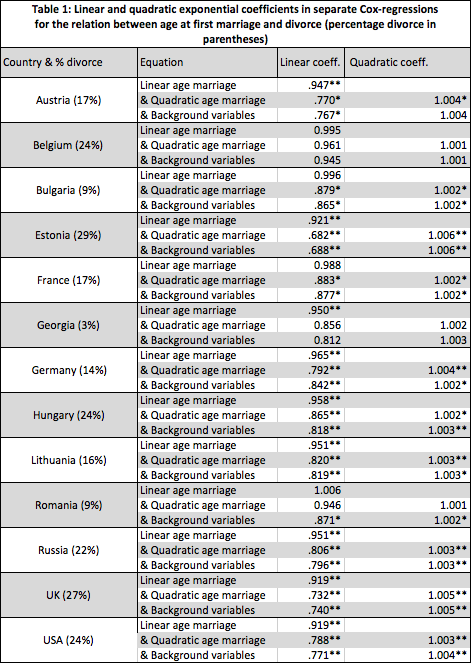 Table 2 shows the percentage of marriages that end in divorce each year for each combination of age at marriage and years married in the UK (so-called life table estimates). This table is comparable to that of Cohen for the USA. The UK is, of course, an Anglo-Saxon country, and it has a high divorce level and a strong market orientation. British individuals who marry for the first time between the ages of 35 and 39 have a higher divorce risk after five years of marriage than individuals who married for the first time between the ages 30 to 34. But those individuals who marry after 30 have a lower divorce risk compared to individuals marrying earlier.

Table 3 shows the same for Germany, a mixed Protestant and Catholic country with a strong family-centered tradition. Individuals who marry when they are older than 34 tend to face a slightly higher risk of divorce in their first five years of marriage than individuals marrying in their early thirties. Moreover, the divorce risk is clearly higher for individuals when they marry at age 40 or later, versus marrying at age 30 to 34.

Many European unions do not begin with marriage. Often they are preceded by a period of cohabitation, with or without a civil contract. In most European countries cohabitation is also common among the higher classes and a question of lifestyle, while in the U.S. individuals from lower classes tend to postpone their formal marriage due to a lack of resources. The successful cohabitations in Europe, as in the U.S., might end in a formal marriage, but that is no longer necessarily the case in a number of northwestern European countries. If we exclude cohabitations from our analysis of the relation between age at first union (marriage or not) and union dissolution risk, we might have flawed results. Therefore I also compute the relation between age at first union and union dissolution risk. Note that first union also can include marriage at some point of the relationship, and union dissolution can also include divorce. The percentage of unions that dissolve in each country therefore will be higher than the percentage of marriages that end in divorce. 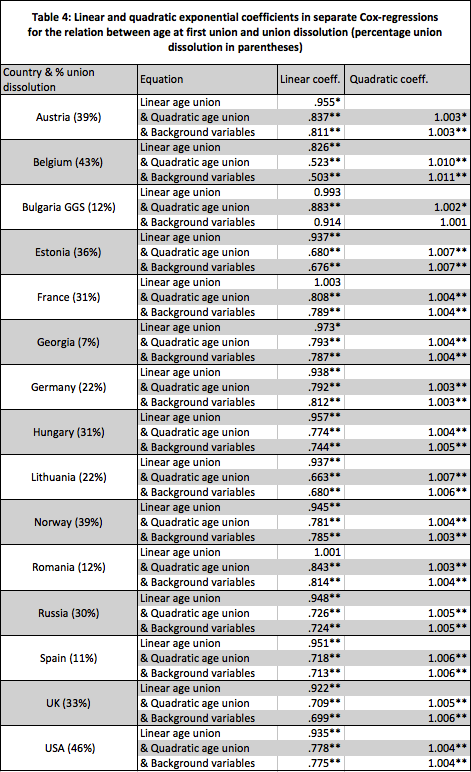 Table 5 shows the percentages of unions that dissolve each year per combination of age at union and years of union for Norway (a Protestant and equalitarian country with a high rate of union dissolution). Individuals who started their first union between 35 and 39 years of age face a lower risk of union dissolution than all younger individuals during their first four years together, but five to nine years after entering a union, they face a higher dissolution risk than those individuals who started a union between ages 30 and 34.

Table 6 shows the same data for France (a Catholic country with a strong family tradition but also a long divorce history). Individuals who started their first union after the age of 35 have a higher union dissolution rate, especially during the first nine years of their union, than those individuals who entered a union when they were between ages 30 and 34. 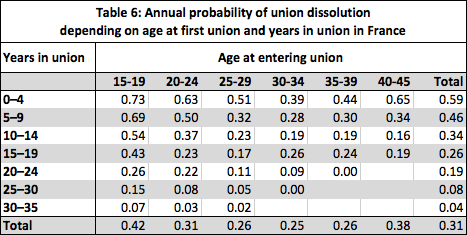 The relation between age at first union/marriage and union dissolution is curvilinear, not only for the USA, as Wolfinger found, but also for many European countries. The optimal time to start a lasting first union or marriage is around age 30. Marrying before one reaches the age of 25 seems unwise, given the higher divorce rates.

Why age 30 is optimal is less clear. It is not hard to explain the instability of an early marriage or union: those who enter a union at a young age may not have looked around enough for the right partner, or they may experience non-convergent development through young adulthood.

The problem is the higher union dissolution rate for those individuals who entered their first union/marriage after their early thirties. A possible explanation is that these late starters were negatively selected: they are the partners with the lowest socioeconomic resources or with more inflexible habits. But our cross-national analyses suggest that the higher union dissolution rate for older individuals exists only in societies with higher rates of union dissolution across the board. For instance, I did not find a significant quadratic parameter for Georgia and Romania, the countries with the lowest divorce rates in the GGP data, while the selection explanation should also work people entering unions later in these societies.

A first explanation for this trend is that older first-time partners in societies with high divorce/dissolution rates have a higher risk of getting a partner who is not a first starter but who has experienced an earlier union dissolution. This higher risk is due to a growing shortage of first-time partners for older singles, because most of their contemporaries have already started their first union. Couples in which at least one partner has a previous union dissolution have a higher union dissolution risk (on average) no matter when they enter a union. Late starters’ higher risk of pairing up with an already divorced partner is not a statistical artifact, but reflects the restrictions of the partner market for older singles. However, adding to the equations a crude indicator of having a union/marriage with a divorced partner does not change the importance of the curvilinear relation between age at union/marriage and union dissolution risk.

A second explanation comes back to negative selection, but in a way specific to societies with high dissolution/divorce rates. In these societies, individuals need more cognitive and emotional resources (education, intelligence) to maintain their relationships (Härkönen & Dronkers, 2006; Dronkers, 2002). When people enter unions in their late thirties or beyond, it might indicate that they have less of the necessary cognitive and emotional resources to maintain their relationships than those who start around the age of 30. However, accounting for partners’ educational level likewise did not change the importance of the curvilinear relation between age at union/marriage and union dissolution risk.

In short, we know that delaying a first marriage or cohabiting union beyond the early thirties is linked with a higher risk of divorce relative to marrying around the age of 30, both in the U.S. and in these European countries. But at this point, we do not know why that’s the case.

Who has no house now, will never build one.
Whoever is alone now, will long remain so,
Will watch, read, write long letters
and will wander in the streets, here and there
restlessly, when the leaves blow.
—Rainer Maria Rilke, “Fall day”