Many who had never heard of Minnesota Vikings star Adrian Peterson before last week learned his name for a tragic reason: his two-year-old son died in a South Dakota hospital Friday after reportedly being abused by his mother’s boyfriend, 27-year-old Joseph Robert Patterson. According to police, Patterson had only recently begun dating the boy’s mother, and the fatal abuse took place in his apartment, where the boy and his mother had recently moved. It wasn’t the first time he reportedly committed abuse: he pleaded guilty to a charge of simple assault involving a different woman and her three-year-old son in 2012.

Sadly, Adrian Peterson’s son is one of an estimated 1,570 children who will die of abuse or neglect this year. While no child can be entirely protected from the risk of being abused, he was living in a particularly dangerous situation: with his single mother and her boyfriend. As the figure below illustrates, children are safest when they’re living with their married biological parents—but if they’re instead living with just one parent and that parent’s partner (typically a mother and her boyfriend), they’re more than six times as likely to be neglected and more than eleven times as likely to suffer abuse. Other living arrangements—with other married parents, unmarried parents, neither parent, or a single parent with no partner—fall somewhere between those two extremes. “Children do best with a mother and a father” may be a tired cliché, but it also appears to be true. 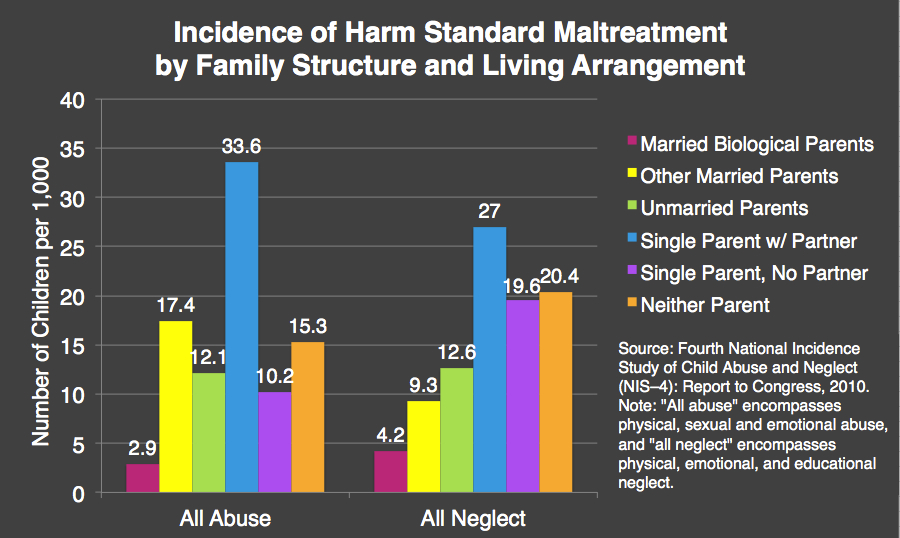 Of course, that’s not to say that every single mother should immediately marry her child’s father. As accounts of domestic violence in books like Promises I Can Keep show, for a woman to stay with her child’s father could mean exposing not only herself but also her child to a greater risk of abuse. (Studies show that perpetrators of domestic violence often also commit child abuse.)

The lesson for unmarried parents, rather, is to slow down in relationships and exercise caution in choosing partners and entrusting them with your children. Be aware of warning signs of abusive partners, and of signs that a child is being abused. As Andrew Cherlin documents in The Marriage-Go-Round, Americans “partner, unpartner, and repartner faster than do people in any other Western nation”:

They form cohabiting relationships easily, but they end them after a shorter time than people in other nations. They tend to marry at younger ages. After a divorce, they tend to find a new partner more quickly. In other words, having several partnerships is more common in the United States not just because people exit intimate partnerships faster but also because they enter them faster and after a breakup reenter them faster.

The reasons for this pattern are many, but we know that children struggle when their living situation changes every few years, and that parents’ romantic partners present a greater risk to kids than family members do. Cherlin’s advice, then, is simply for Americans to slow down and make romantic decisions carefully, without rushing from one relationship to the next. Heeding that advice could help adults and kids to thrive.

Why Do Intelligent Women Join Cults?