A Red Family Advantage? Marriage and Family Stability in Red and Blue America

Today, the conventional wisdom is that “red families” are weaker than “blue families,” a view that was cemented by the publication of Naomi Cahn and June Carbone’s groundbreaking 2010 book on family life and political culture, Red Families v. Blue Families. Red America, the argument goes, is more likely to embrace outmoded views about sex, gender, and marriage that are ill suited to the new economy and the more egalitarian world that we now live in. By contrast, blue America emphasizes education, delayed parenthood, and gender egalitarianism, all values that are supposed to equip its citizens to build comparatively stronger and more stable families in twenty-first-century America.

In an interview with Cahn and Carbone, Neal Conan at NPR summarized the conventional wisdom this way:

The most stable families, the homes with two parents to nurture their kids, are found in the liberal strongholds along the East and West Coasts. [By contrast]… the red states, the heartland states, if you will, the states that tout family values or celebrate family values, there are religious and traditional [values there] that you [Cahn and Carbone] say increase the likelihood of having less stable families.

There is only one problem with the conventional wisdom about family life in red and blue America. It’s mostly wrong. While it’s true that some of the bluest states in the country—such as Massachusetts and Minnesota—have some of the most stable families, some of the reddest states—such as Utah and Nebraska—do, too. In fact, at the state level, as Nicholas Zill and I recently showed at Family Studies, the relationship between voting Republican and stable family life is curvilinear: that is, the bluest states and the reddest states are most likely to enjoy high levels of family stability for the children living within them. In other words, at the state level, there is no straightforward, linear relationship between voting Democratic and children enjoying a more stable family life.

But the state-level focus of this discussion misses the connection between family stability and political culture at the local level. After all, there are plenty of blue states with lots of red counties (think Pennsylvania), and vice versa (think Texas). Up until now, we have not known about the connection between local political culture and stable family life. As this research brief shows, it turns out, at the local level, red counties typically enjoy somewhat stronger families than do blue counties on at least three measures worth considering: marriage, nonmarital childbearing, and family stability.1 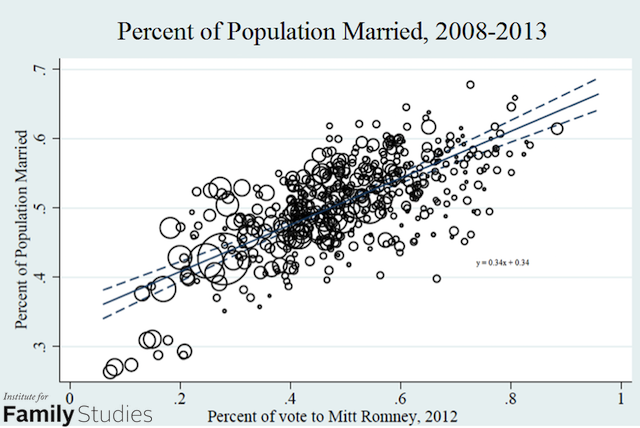 Note: Data from the American Community Survey (ACS). Size of circle indicates county population. The relationship between voting Republican and percent married is statistically significant using a population weight to adjust for differences in the size of counties, both with and without controls for education, race, South, and age. The relationship also holds in and outside of the South. N=468 largest counties available in the public use ACS data for this outcome (covering about two-thirds of the nation’s population).

Figure 1 shows that counties that gave a larger share of their vote to the Republican presidential candidate (Mitt Romney) in 2012 have a higher share of their population that is married. This is true with and without controls for region, education, race, and age at the county level (and weighting for population size). The data suggest that marriage is more likely to ground and guide adult lives, including the entry into parenthood, in red America. The red advantage in marriage, in all likelihood, flows in part from higher levels of religious participation and normative support for marriage found in more politically conservative counties. 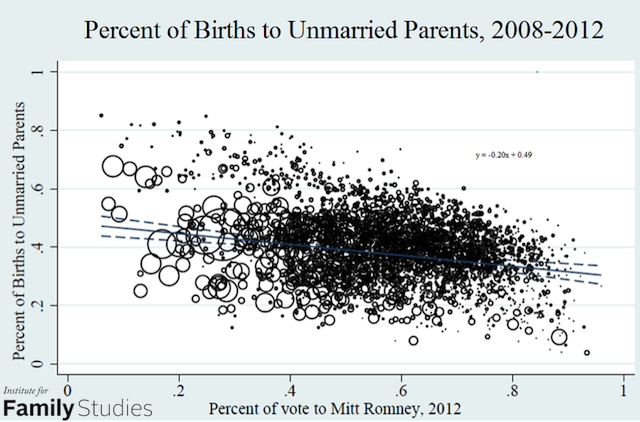 Note: Data from the US Vital Statistics Natality Birth Data. Size of circle indicates number of births in the county. The relationship between voting Republican and the percent of births to unmarried mothers is statistically significant using a population weight to adjust for differences in the size of counties, both with and without controls for education, race, South, and age.  The relationship also holds in and outside of the South. N=3,104 counties available in the natality data for this outcome (includes almost the entire population of the nation).

Indeed, as Figure 2 shows, red counties also have somewhat lower levels of nonmarital childbearing. Again, this relationship holds up with and without county-level socio-demographic controls. Being born within marriage matters because children who are born into a married home are much more likely to experience stable family lives than children born to unmarried couples or single parents. 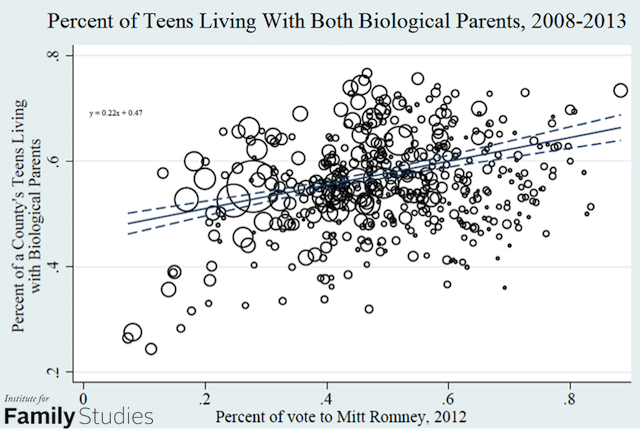 Note: Data from the American Community Survey. Teens were ages 15 to 17 at the time of the survey. Size of circle indicates county population. The relationship between voting Republican and the percent of teens living with both biological parents is statistically significant using a population weight to adjust for differences in the size of counties, both with and without controls for education, race, South, and age. The relationship also holds in and outside of the South. N=468 largest counties available in the public use ACS data for this outcome (covering about two-thirds of the nation’s population).

Now, it is true that divorce is more common in the South, a region that tilts red. As I have noted, “the legacy of slavery, low levels of education, a history of underinvesting in public institutions, and a Scotch-Irish culture marked by higher levels of family instability” all seem to have combined to make family life more fragile in the South. If the South did a better job of fostering marital stability, the red family advantage would be stronger than it is.

But this divorce disadvantage does not translate into higher levels of family instability in red America as a whole. That’s probably because nonmarital childbearing, not divorce, is now the biggest engine of family instability in the United States. Here, red America’s stronger religious and normative support for marriage—manifested in higher rates of marriage and lower rates of nonmarital childbearing—means that the divorce disadvantage in red America is outweighed by the fact that children are more likely to be born to a married family in more conservative counties. The bottom line: the marriage advantage in red America helps explain why children in red counties are somewhat more likely to enjoy stable families than are children in blue counties.

These analyses don’t mean that other factors, such as education and race, are unimportant. As Cahn and Carbone would predict, the American Community Survey indicates that a higher level of education is also linked to more marriage, less nonmarital childbearing, and more family stability at the county level (see Appendix below). Teenagers in counties with lots of college-educated adults are more likely to be raised by their own married parents, because better-educated Americans are now more likely to get and stay married. And education is higher in blue counties. So, education would seem to play a particularly important role in stabilizing family life in blue America.

These analyses also tell us that red counties do not have an overwhelming advantage when it comes to family life. Unfortunately, only about one in two teens is part of a two-parent, biological family in most red and blue counties across America.

But this research brief makes it very clear that the conventional wisdom about red families vs. blue families is wrong. In contemporary America, red families have a modest comparative advantage when it comes to family stability for children. That’s in part, it would seem, because red America endows marriage with comparatively greater significance and power than does blue America.

1. Earlier research and journalistic coverage have highlighted the elective affinity between high rates of marriage and voting Republican for president at the local levels. In fact, in 2012, the share married was one of the best correlates of red voting at the county level. This also means that the share unmarried in a county was one of the best correlates of voting blue. To put this another way: The arrow of causality between the (political) culture of red counties and marriage is likely to point both ways, with more conservative regions valuing marriage more, and with more married counties more likely to favor limited government, conservative values, and the Republican Party.

The association between county partisanship and family stability holds in the South and the North, as the scatterplots below indicate. (Southern states include Texas, Oklahoma, Arkansas, Louisiana, Alabama, Mississippi, Tennessee, Kentucky, West Virginia, Maryland, Delaware, Virginia, North Carolina, South Carolina, Georgia, and Florida.) Also below are the regression equations for the three outcomes covered in this research brief: the share of adults married, percent of births to unmarried parents, and family stability. In each of these models, variables tapping county-level trends in education, age, race, and region (South vs. North) are controlled for, and the data are weighted by county population size. 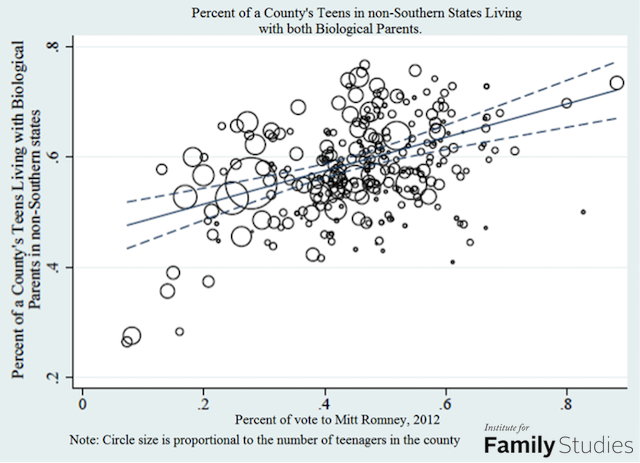 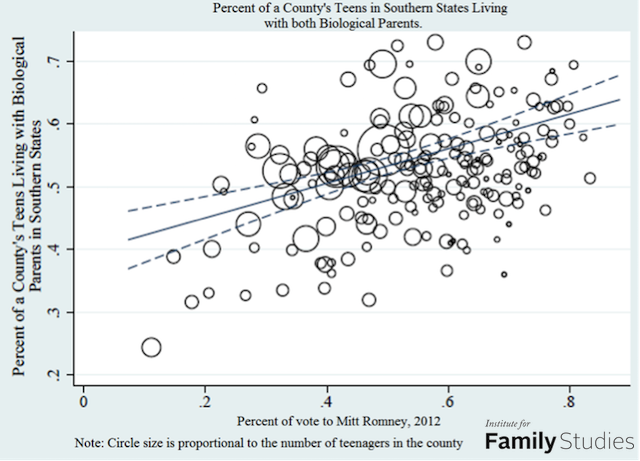