by Peter Jon Mitchell
Back to Blog

It’s no secret that marriage has been on the decline in Canada for decades. Young adults are increasingly cohabiting or living unpartnered, and they view marriage as nice but unnecessary for a fulfilling family life. So why do many Canadian young adults still choose to marry? Conversely, why are some resolutely against getting married? In a new Cardus report, we examined Statistics Canada’s 2017 General Social Survey to answer these questions. 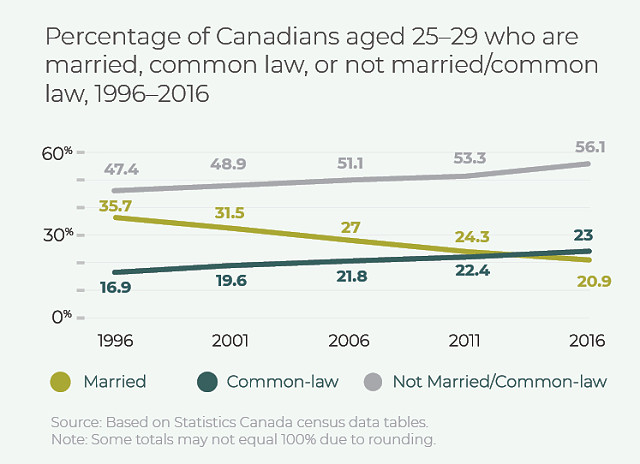 Three questions from Statistics Canada’s 2017 General Social Survey help to clarify the main reasons that partnered young adults choose to marry or forego marriage. One question was posed to each cohort: married, intending to marry current partner, and not intending to marry current partner. Each cohort received a selection of possible answers. Our analysis examined the frequency of selected responses by age and sex. We focused our attention on respondents ages 25 to 34, as the average age of first marriage in Canada is approximately 30 years old.

Our most intriguing finding was among partnered young adults choosing to forego marriage. Half of partnered men and two out of five women selected “don’t believe in the institution of marriage” as the main reason for their decision not to get married. 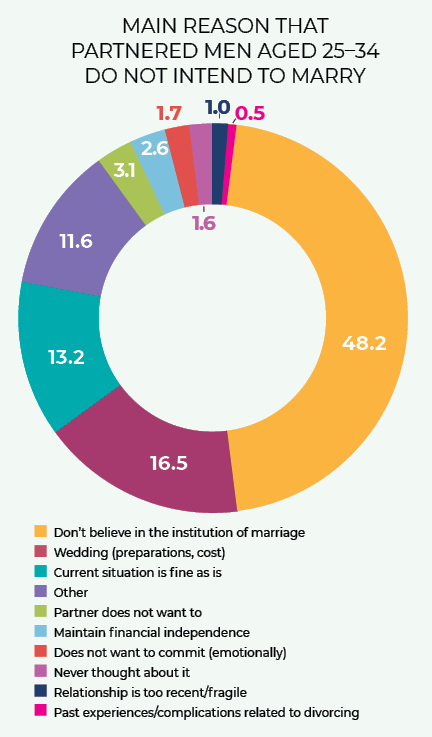 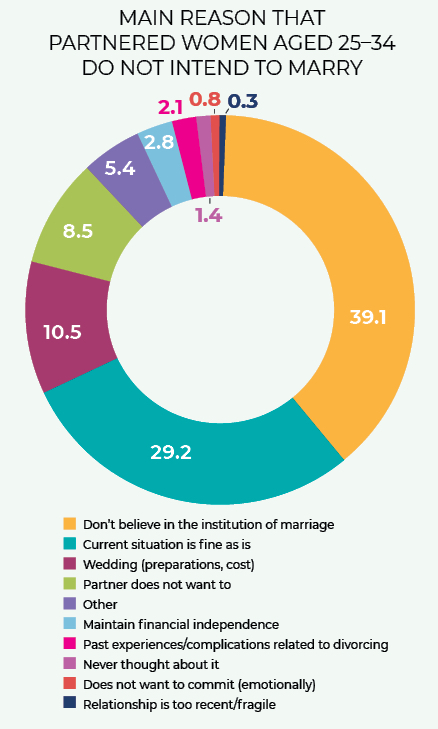 Given how many young adults in Canada do not believe in the institution of marriage, it’s worth unpacking how respondents understand the institutional nature of marriage and what precisely they reject. In a 2016 survey by Cardus, we asked Canadians, “Is marriage an outdated institution?” and then compared responses to survey data from 2002. While we observed a small increase in the portion of those who agreed, the share of those answering “neither agree or disagree” tripled between 2002 and 2016. How Canadian young adults think about the purpose and function of marriage certainly requires further investigation.

Perhaps respondents selecting “the current situation is fine” see little difference between their relationship status and marriage, or maybe there are specific aspects of marriage they perceive as unappealing.

Wedding costs and preparations are a main factor for choosing not to marry for some couples. This finding is consistent with Canadian data noted in previous Cardus work. Our investigation is limited to age and sex, but further exploration of socioeconomic variables could provide further insight.

The least selected main reason among married respondents was “legal protections and financial security,” and this answer was near the bottom of the list for partnered young adults intending to marry their current partner. 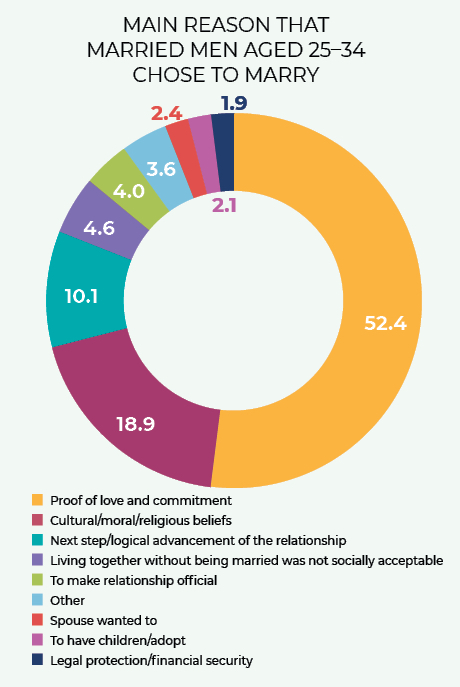 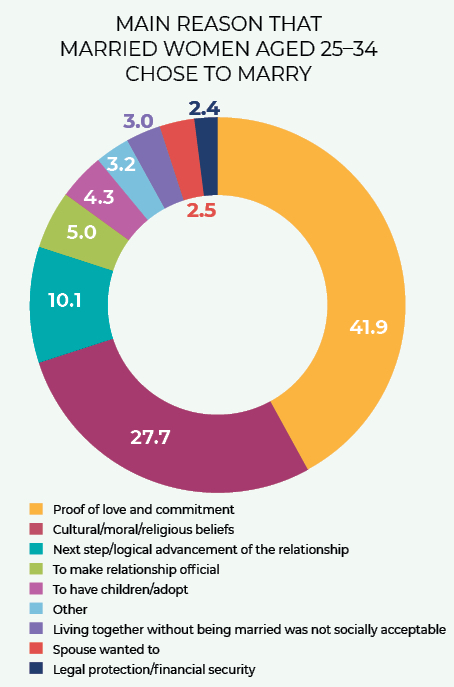 Examining the most frequently selected response among young married and marriage-minded Canadians, we note at least three ways respondents could have interpreted “proof of love and commitment.” First, respondents may have understood proof of love and commitment as prerequisite for moving into marriage, somewhat similar to understanding marriage as the “next logical step.” Another explanation is that respondents may view the decision to marry as the proof of their love and commitment to their partner. To put it another way, marriage serves as a mutual communication about the state of the relationship. Finally, respondents may view the decision to marry as a declaration of the state of the relationship to friends, family, and the wider community. Our analysis does not illuminate how respondents interpreted the response, but we speculate in our report that personal aspirations and cultural influences play a role in marital decision making among those who selected this response.

While “legal protections and financial security” might factor into the decision to marry, they don’t serve as the main reason for many young couples today, as our analysis showed. Interestingly, our analysis found this response option was more frequently selected by older unmarried adults who intended to marry their partner. We speculate that younger adults may have fewer assets to protect or may have a lower level of financial literacy, which could contribute to the lower ranking of this reason. Also common-law couples in Canada share many of the same legal rights and obligations as married couples, with the exception of Quebec where, in spite of a much lower marriage rate as contrasted with the rest of Canada, the civil code has greater legal distinctions between married and cohabiting couples.

In Canada, there are few public conversations about the benefits associated with marriage for adults, children, and communities. This contrasts sharply with the United States where it is not unusual for progressive and conservative leaning scholars to acknowledge the socioeconomic divides within family structure. There is far less discussion or even acknowledgement of the role of healthy marriage in Canadian public discourse. We are left to ask: what sources of information and influence contribute to marital decision making among Canadian young adults? For those of us who understand the importance of marriage for human and societal flourishing, there is a big task ahead of us: figuring out new ways for civil society to support those who aspire to healthy marriages.

Peter Jon Mitchel is the Family Program Director at Cardus and co-author with Lita L. Day of the new report, For Love or Money? Why Canadian Young Adults Marry…or Don’t.