Shrinking American Motherhood: 1-in-6 Women in Their 40s Have Never Given Birth

More U.S. women are skipping motherhood today. In 2020, 1-in-6 women reaching the end of their childbearing years had never given birth, according to a new Institute for Family Studies analysis of Census data. This share was lower in 2016, when 14% of women ages 40 to 44 had never given birth. At the same time, the share of women who have had two or more children declined from 32% in 2016 to 30% in 2020. 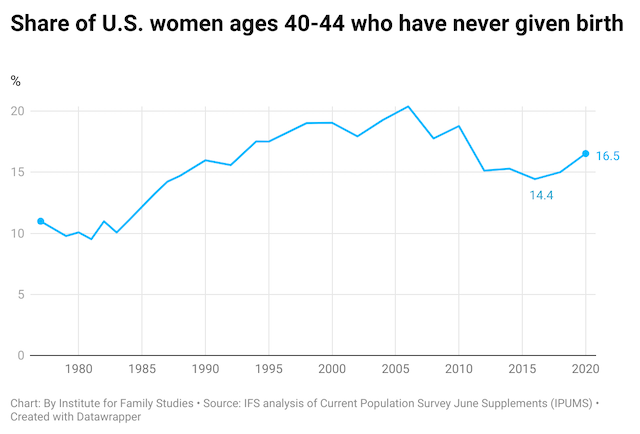 The rise of childless women is in line with the downward trend in U.S. fertility in recent years. In 2020, amid the Covid-19 pandemic, the U.S. birth rate fell to a record low of 1.6 children per woman. Even though the rate rebounded slightly in 2021 to 1.7 children per woman, it is still well below the population replacement level (2.1 children per woman).

A further analysis shows that the share of childless women is higher in some demographic groups than others. Nearly half of never-married women ages 40-44 have never had children, compared with only 9% of married women. College- educated women and native-born women are also more likely to be childless than others. And among the major racial and ethnic groups, the share of being childless is highest among white women (19%) and lowest among Hispanic women (9%). 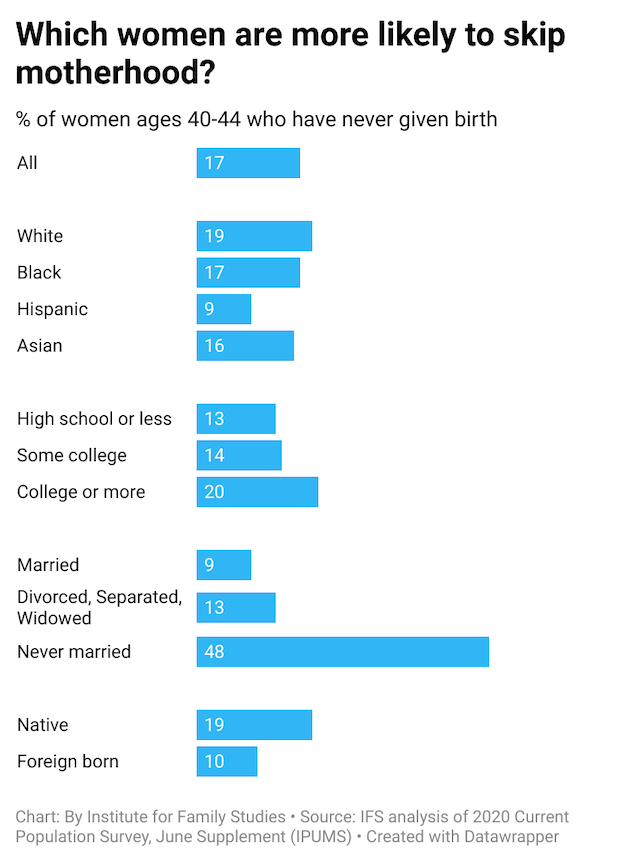 Children bring enormous joy to their parents, but also more responsibilities and less me-time. The relationship between parenthood and happiness is indeed complicated. Earlier research has shown that parents tend to be less happy than non-parents and parenthood is linked to a lower quality of life. But recent data points to a different direction. Moreover, parents were happier than non-parents during the Covid-19 pandemic and their lives were less lonely and more meaningful.

A closer look at the new 2021 General Social Survey (GSS) data reveals that even though mothers are generally happier with their lives than non-mothers, their happiness also depends on marital status and life stages. In fact, the link between marriage and happiness is much stronger than it is between motherhood and happiness. In other words, it is marriage—not parenthood—that is more closely associated with mothers’ happiness. 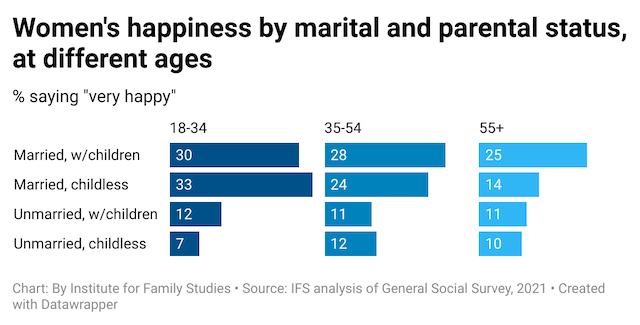 Life With Kids Can Be Exciting, Depending on Your Marital Status

Many women believe that their lives will become less exciting once they become mothers. The data shows that, once again, it depends more on their marital status.

The Covid-19 pandemic limited people’s social circles and traveling opportunities, and the social life of unmarried adults was more affected given that their network includes more friends. The GSS data from pre-Covid years show that unmarried, childless women reported a similar level of excitement in life as married mothers, but they were more likely to report that their lives were dull. And unmarried mothers reported the lowest level of excitement.1

Recent research suggests that single, childless women have more family wealth than single mothers or single, childless men. Bloomberg and other media even suggested that foregoing marriage and parenthood will pay off. However, using a national longitudinal survey data that tracks the lives of men and women born in the late 1950s and early 1960s (the youngest Baby Boomer generation), this study finds that unmarried and childless women are less wealthy than their married peers.

At ages 51 to 60, married women with children have a median family wealth of about $322,000, and married, childless women have accumulated around $435,000 in family wealth.2 In comparison, unmarried and childfree women’s family wealth is significantly smaller ($100,000). And unmarried mothers have the smallest net wealth when reaching an older age ($16,000).

In summary, this IFS research brief finds a rise of women who are childless at the end of their reproductive years. It is unclear how much of this childfree life is by choice, but one thing is clear: Marriage matters more to quality of life than parenthood. Unmarried childless women are not happier, nor are their lives more exciting or richer, when compared to their married peers. Instead, married women are happier than unmarried women at all life stages, regardless of whether or not they have children. Married women also live more exciting lives than their unmarried peers in their prime years and accumulate much more wealth than unmarried women as they age.

1. Results based on GSS2014-2018 survey data. The 2021 GSS is not comparable to previous GSS, as it is a web-based survey and different from the traditional in-person interviews in the previous GSS.

2. Based on National Longitudinal Survey of Youth, 1979 cohort. Family net wealth was measured in 2016 when respondents were ages 50-51 and adjusted for inflation (2020 dollars).

3. The wealth gap between mothers vs. non-mothers remain large after controlling for women’s education and race.