Over the past several decades, America has undergone a marijuana revolution. In 2003, just 1 in 3 Americans supported legalization, and recreational pot was illegal nationwide. Today, 2 in 3 support legalization, including a majority of Republicans and regular church-goers. Recreational use is legal in 19 states and the District of Columbia, while a further 18 states permit “medical marijuana,” often under highly permissive regimes.

But while marijuana has become widely available, public debate has remained stuck in the past, endlessly repeating decades-old talking points. Because of that, we are only now beginning to understand the social implications of the heavy consumption of marijuana by a subset of the population—a pattern which almost certainly contributes to, among other things, the malaise that has settled over contemporary singlehood.

Remarkably, as marijuana has become more abundant, the share of the population with exposure to it has held roughly steady. In 2002, about 40.5% of Americans over 12 had ever used marijuana; today, that figure is 45 percent. Advocates of legalization point to this, along with the fact that the share of high schoolers who report marijuana use is roughly flat, as evidence that legalization had little impact on actual consumption, contrary to opponents’ fears.

While it’s true that the number of people reporting marijuana use has not changed dramatically, that does not mean that the volume being used has not increased. In fact, as drug policy expert Keith Humphreys recently noted, the number of daily users has risen dramatically since the early 1990s. 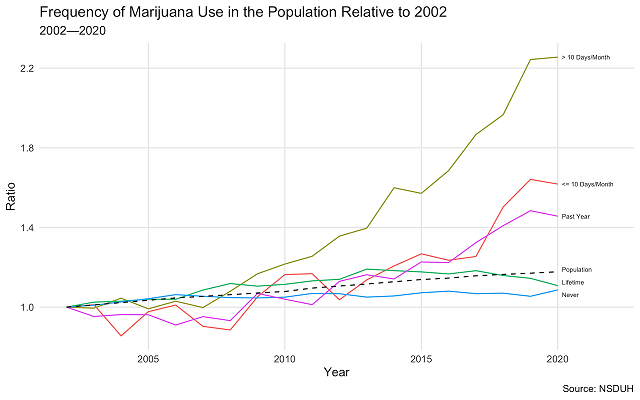 I partially replicate Humphreys’ chart above—taken from a presentation by Jonathan Caulkins, a drug policy scholar and professor of operations research at Carnegie Mellon—using data from the National Survey on Drug Use and Health (NSDUH). It shows that the number of heavy users has grown much faster than either the total number of users or the population as a whole. In 2020, there were about 1.18 times as many Americans ages 12 and up as there were in 2002, but there were 2.26 times as many Americans who used marijuana 10 days a month or more.1 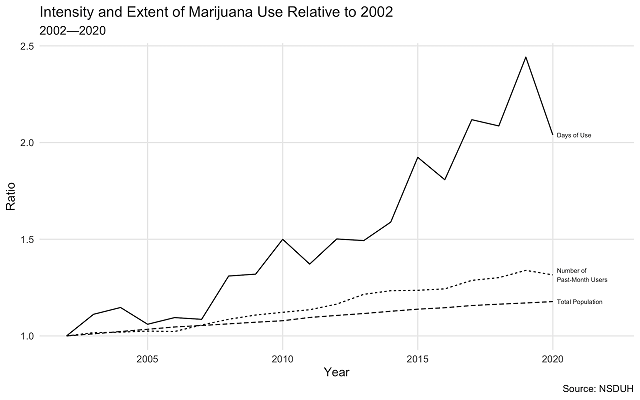 Not only are there more marijuana users, but they are using much more heavily. In 2020, there were about 1.18 times as many Americans as there were in 2002, and 1.32 times as many people who have ever used marijuana. But the total number of days of use2 is more than double what it was in 2002, hitting a maximum ratio of 2.44 in 2019 (the decline from which may reflect either changes in behavior or in measurement, both plausibly attributable to the COVID-19 pandemic). In other words, the amount of time Americans are spending using marijuana has grown much faster than either the number of marijuana users or the population. Marijuana use has not really grown much in extent, but it has grown dramatically in intensity.

All of this, of course, has significant individual and social implications. Marijuana is still thought by some to be harmless and non-addicting. But about 10% of people who use will develop a marijuana use disorder, characterized by continued use in spite of “negative impact on one's life and health,” and which is associated with “neuropsychological deficits such as memory and attention problems.” In fact, 1 in 3 past-month users in the 2020 NSDUH met the criteria for marijuana use disorder.

More generally, marijuana is, as Caulkins once put it, a “performance-degrading drug.” Even if one supports the legalization of marijuana, one can reasonably agree that a significant minority of the population being routinely intoxicated, whether it be by alcohol or marijuana, is a public health concern. For example, a recent survey found that 40% of past-year users admit to driving under the influence at least once a month. 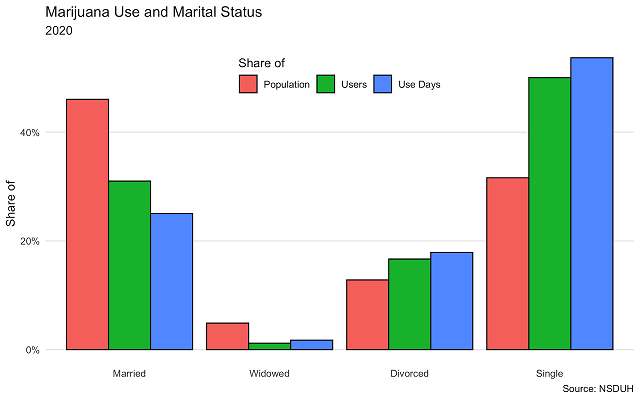 It’s worth asking how marijuana use interfaces with marriage and family formation. In the chart above, I break out each marital status group’s share of a) the overall population, b) number of past-month marijuana users, and c) number of total days of use. In short, marijuana use is far more common among single people, relative to their share of the population, than among married people. 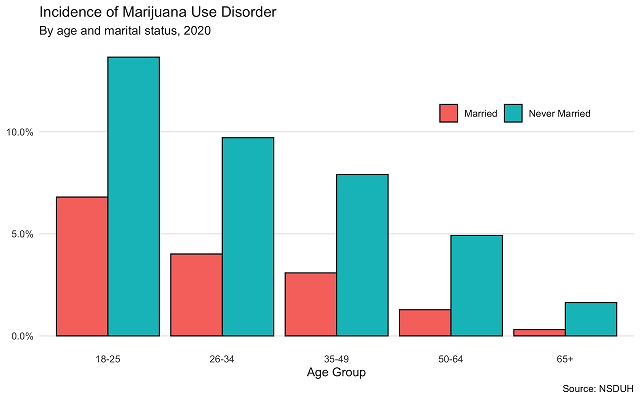 Some of this effect is attributable to age—younger people use more weed and are less likely to be married, etc. But, as the chart above shows, the relationship between marital status and problematic marijuana consumption persists even after controlling for age. At every age level, single Americans are far more likely to have a marijuana use disorder than are their same-age married counterparts.

Does this mean that heavy marijuana use causes singleness? Probably not, at least not in isolation. Certainly, any analysis that sought to prove as much would be far more sophisticated than this. It is just as likely that marriage reduces marijuana use, if for no other reason than that family leaves less time for consumption. And it is still more likely that some underlying set of factors drive both singleness and disordered consumption together.

But there is a plausible story whereby marijuana is part of a tangle of pathologies associated with sustained singlehood. For some, compulsive marijuana use—as with any substance—may serve as a way to escape from life’s problems. But that avoidant behavior can, in turn, perpetuate those problems. Heavy marijuana use can contribute not only to memory and attention problems, but also to anxiety (at high enough doses), lowered motivation, and (debatably) depression, all conditions which make it harder for those users to overcome their stasis. In a 2018 article on the spread of marijuana use disorder, the Atlantic’s Annie Lowrey identifies heavy users describing “lost jobs, lost marriages, lost houses, lost money, lost time. Foreclosures and divorces.” Even if marijuana is not the but-for cause of those outcomes, it may have contributed to and reinforced the situation which produced them.

In this regard, the rise in intensive marijuana use is part of a broader deadening of American society: the decline in marriage and child rearing, the rise of opioid or pornography addiction, and the surge in anxiety and depression among young people. As Yuval Levin put it in an essay last year, “the challenges to America’s social order now seem less like exorbitant human desires driving people’s lives out of control and more like an absence of energy and drive leaving people languishing and enervated.” Marijuana is only part of those challenges, of course, but it is a part nonetheless, a fact too rarely acknowledged.

Charles Fain Lehman is a fellow at the Manhattan Institute and a Contributing Editor of City Journal.

1. The 2020 National Survey of Drug Use and Health cautions against comparing data collected in 2020 to prior years’ data, because of changes in survey methodology due to the COVID-19 pandemic. I do so here both because the 2002 – 2019 trend is instructive, and because the 2020 estimate deviates downward from that trend, suggesting that methodology-introduced bias underestimates the true change in heavy use.

2. For a given respondent, I estimate this as total number of past month days of use (the variable MRDAYPMO) multiplied by 12, multiplied by that respondent’s weight, which in the NSDUH public use file is equivalent to how much of the target population that respondent represents. The sum of these is the total number of days of use. This is actually an underestimate, because any users who report using in the past year but not the past month—about 7.5% of respondents to the 2020 NSDUH—are counted by this method as not having used.

When Your Spouse is Addicted

Is Our Addiction to Pleasure Destroying Us?