by Alan J. Hawkins Heather Smith
Back to Blog

In a recent episode of Facebook Watch’s television series, The Red Table, Jada Pinkett Smith, her daughter Willow Smith, and Jada’s mother Adrienne Banfield-Norris, or “Gammy,” explored unconventional relationships. Willow (age 18) began to discuss the “constricting…ownership” of monogamous relationships. Jada (age 47) supported Willow’s opposition to monogamy, while across the table Gammy (age 65) wasn’t “too sure about this polyamory thing.”

The family invited a “throuple,” a three-way relationship sometimes called a “triad,” to the Red Table to discuss the ins and outs of polyamory. Thomas, sitting next to his wife Cathy and their girlfriend Nicole, identified as heterosexual, while the two women identified as bisexual. What started out as a monogamous relationship turned into an open relationship for Thomas and Cathy after one year of marriage and eventually into a polyamorous relationship with Nicole five years later. The three of them have been together for nine months.

Polyamory is one form of consensual non-monogamy (CNM), where an individual is in a relationship with multiple people but with everyone consenting to the arrangement. Each relationship within the polyamorous relationship may be structured as a more sexual connection or a more emotional connection. For example, in a recent New York Times photo essay, married couple Beth and Andrew Sparksfire are shown laying next to another couple. Next to Andrew is his girlfriend, Effy Blue and her boyfriend Thomas. However, Beth and Thomas are not in a relationship with each other. They say consensual non-monogamy works for them.

Despite stories like these, for the vast majority of the individuals in the United States, monogamy is still preferred, according to a recent study from The Wheatley Institution and School of Family Life at Brigham Young University (the “iFidelity” survey). This survey of 2,000 respondents, which included married and unmarried individuals, and individuals in both opposite-sex and same-sex relationships, is the first estimate of CNM attitudes and behavior with a large, nationally representative sample. From this sample, we found that only 3% of adults reported currently being in a CNM relationship and only one-in-eight (12%) reported having ever been in a CNM relationship. Furthermore, 86% of respondents said that committed couples should be monogamous (64% “strongly agree”), and 89% said they would not consider an open sexual relationship. 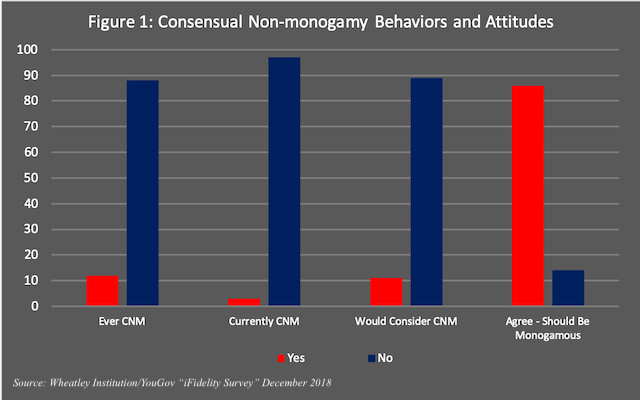 However, we also found noteworthy generational differences in CNM attitudes and behaviors that reflected the “Red Table” episode with the Smith family. We compared responses across generations to the likelihood of engaging in a CNM relationship and the belief that committed couples should be monogamous. The results are summarized in the following figure. 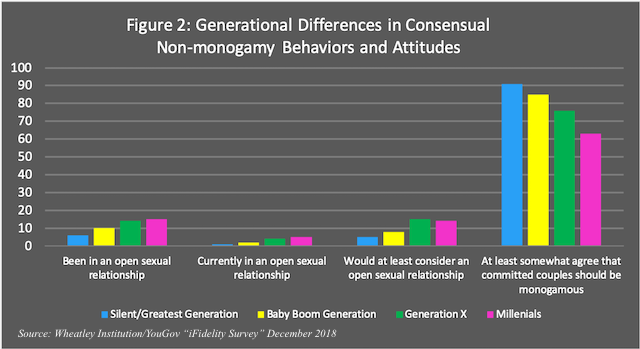 However, despite the generational differences in attitudes, each generation shows fewer people currently engaging in CNM than ever having engaged in CNM (usually by 5-10 percentage points). This suggests that some individuals tested the waters of CNM and felt the water was too cold. Maybe they found that there is something fundamental about committed monogamous relationships.

Why Is Acceptance of and Engagement in CNM Still Rising?

While one can only speculate, some may argue the exploration of non-monogamous relationships is just the next horizon of the unfolding sexual revolution in the United States. Scholars on NPR and the Netflix documentary, Explained, argue that Millennials believe non-monogamy is a part of evolution, as if the desire to have multiple partners in a relationship is a natural progression for humanity. For some, maybe the next sexual horizon looks bright and inviting.

Sex educator Janet Hardy, the author of The Ethical Slut, who is in a polyamorous relationship herself, said,

20 years ago, I used to get calls from show producers all the time, and the call would go, ‘Can you point me towards a poly family that’s not either old hippies or screaking geeks?’ I would say no, because ‘A’ that’s most of my Rolodex, and ‘B’, that’s who was doing poly back then. But these days, when I speak to poly audiences, they’re young professionals, all shiny and new. It’s very different.

Another reason could be that Millennials are less likely to marry and more likely (when they do) to marry at later ages according to the U.S. Census Bureau. For some, this delay of marriage creates time for increased exploration of sexual behavior. It is possible that differences between Millennials and previous generations in CNM attitudes and behavior are just an artifact of changes in marital timing. This could be why we found that half as many individuals had been in a CNM relationship while married (4%) compared to those who were unmarried at the time (9%).

However, in further analyses of the iFidelity data, we controlled for marital status and found that Millennials—regardless of marital status—were still more accepting of CNM and more likely to have participated in CNM at some point. And these differences still held up even when controlling for differences in marriage rates and marital timing across generations.

Others, such as individuals quoted in Rolling Stone, speculate that our culture is beginning to catch up with individuals’ sexual preferences to allow room for alternative ways of being in relationships. So much so, that in the last year, the American Psychological Association, according to the group’s Facebook page, has organized a consensual non-monogamy task force in an effort to “generate research, create resources and advocate for inclusion of consensual non-monogamous relationships in basic and applied research, education and training, psychological practice, and public interest.”

Not all psychologists, however, are enamored with the direction younger generations are going with their questioning attitudes towards monogamy. CNM poses many challenges for those involved. A National Review article highlighted some psychologists’ views of the challenges facing those involved in CNM relationships, including time management, resource allocation, and the spectrum of “consent.”

While CNM may be on the rise despite the many challenges presented, it’s important to remember that the vast majority of Americans still desire to settle down in a monogamous relationship with someone who feels the same. The norm of marital monogamy is not crumbling, although it certainly deserves further monitoring. Still, the apparent rise in CNM could affect married individuals who are not involved in CNM by creating cracks in the norm of marital monogamy, making it harder for those who desire monogamy to ask for it, expect it from their partner, and resist requests to “consent” to opening up the relationship.

Heather Smith is an undergraduate student at Brigham Young University studying family life with an emphasis on human development in the School of Family Life.